Inside Track: The Lathums ‘I’ll Get By’

Secrets Of The Mix Engineer: Caesar Edmunds By Paul Tingen 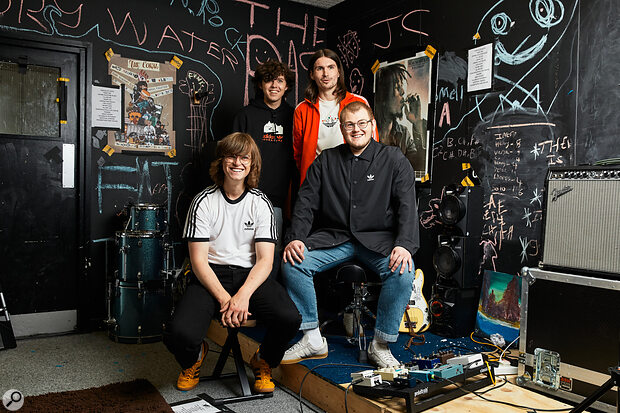 British guitar band The Lathums achieved the rare feat of topping the charts with their debut album. Mix engineer Caesar Edmunds was at the controls.

The chart‑topping position of the Lathums’ debut album How Beautiful Life Can Be last month was remarkable for several reasons. It was the band’s first number one, an achievement that was all the more impressive because the teenage band from Wigan formed as recently as 2019. They landed a deal with Island Records in less than a year, and in 2020 a compilation of their first two EP’s called The Memories We Make reached number 14 in the UK album charts. But with the pandemic making touring and other in‑person promotion impossible, the band’s upwards momentum might well have stalled. 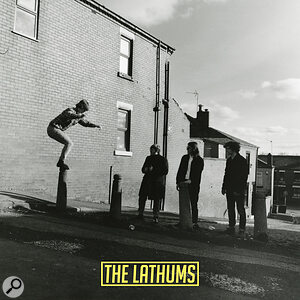 The opposite clearly was the case. Perhaps the Lathums’ were also riding a popular wave, because there’s the not insignificant matter of the band’s UK number one marking another milestone in what appears to be a renaissance of British guitar‑based bands. So far this year, 28 percent of UK album number ones consisted of British bands, compared to 17 percent in 2020 and 15 percent in 2019. Other guitar bands with chart‑topping albums this year include Wolf Alice, the Snuts, Manic Street Preachers, Bring Me The Horizon, London Grammar, Royal Blood and You Me At Six.

How Beautiful Life Can Be was also a first number one for Caesar Edmunds, the album’s mixer. Edmunds has been around a long time in the London studio scene, and has impressive mixing engineer credits like Foals, Editors, the Killers, Queens Of The Stone Age, and many more. However, Edmunds obtained most of these credits while working for, and with, legendary mixer Alan Moulder.

“I started working with Alan in 2012,” recalls Edmunds. “I began as a runner here at Assault & Battery Studios, going between Alan and Flood, who when I arrived were working on a Foals album. As I had joined the recording process towards the tail end, it was quite intense. So I stuck around more in Alan’s room as he had just started mixing the album. I gradually gravitated more and more towards mixing, and became Alan’s full‑time assistant.”

Alan Moulder and Flood are the owners of Assault & Battery Studios in North London, and barely need an introduction, as they have between them been involved in the making of classic albums by the Smashing Pumpkins, U2, Depeche Mode, Foo Fighters, Arctic Monkeys, and others. Edmunds was Moulder’s right‑hand man for nine years, and enjoyed the experience so much that he was in no hurry to go independent. He only made the jump early this year, physically moving only a few yards, as he set up his own mix room down the corridor from Moulder’s studio.

When asked what he learned from working with Moulder and Flood, Edmunds doesn’t hesitate for a moment: “That it is about how music feels. So trust your gut! Going to LIPA [Liverpool Institute of Performing Arts] was great, but it made me too clinical as a mixer. When you learn from people like Alan and Flood, who really are the cream of the cream of the studio industry, you learn that the most important thing is how it feels. That you need to ask yourself what it is you’re trying to convey with your mix. It’s not about the effects or the EQ. I learned all the tools and techniques at LIPA. In the real world it’s about very different things.”

Caesar Edmunds: The most important thing is how it feels. You need to ask yourself what it is you’re trying to convey with your mix. It’s not about the effects or the EQ. I learned all the tools and techniques at LIPA. In the real world it’s about very different things.

Working with Flood and Moulder was a culmination of a journey that began in Edmunds’ native Singapore, where he was heavily into music, mostly playing guitar. He then spent his national service being a police officer for two years on the streets of Singapore. 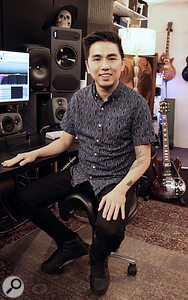 Caesar Edmunds at his room in Assault & Battery studios, where the Lathums’ How Beautiful Life Can Be was mixed.“That was crazy! Before I was a police officer I had tried to do some music courses in Singapore, but did not manage to get into any course. But I was admitted to LIPA, which was great. I moved to the UK in 2009, and spent three years in Liverpool. The first year was like a foundation course, with the first half dedicated to music, and the second half to sound technology. I had never stepped into a studio until then. I loved it. I realised quickly that there were many people around me who were better at playing the guitar and songwriting, but I still wanted to be involved with music, so decided to concentrate on working in studios.

“At some point I managed to get Alan’s email address, and asked him whether I could be a teaboy or whatever, and he wrote back, saying ‘come over.’ So I started literally making tea and so on. Of course, over time I took on more responsibilities, and eventually ended up with mix engineer credits, with Alan supervising these mixes. Alan would sit in front of the desk and speakers, while I’d be manning Pro Tools. We got to a point where it was almost telepathic. Alan would just look at me, and I would know exactly what to do.”

Moulder and Edmunds’ telepathic connection played a part in the making of the Grammy‑nominated album Villains by Queens Of The Stone Age, and Edmunds also acted as mix engineer on Grammy‑nominated albums by PJ Harvey (The Hope Six Demolition, 2016, mixed by Flood) and St Vincent (three tracks on Masseduction, 2019, with Catherine Marks directing the mix). The title song on the latter won a Grammy Award for Best Rock Song, also earning Edmunds a Grammy.

Even before formally going independent, Edmunds already had been mixing projects on his own, including by Blossoms, EOB (Radiohead’s Ed O’Brien), Nada Surf, Circa Waves, Frank Carter & the Rattlesnake, Suede, HMLTD, White Lies, Ride, Palace and the Amazons. This work earned him the Breakthrough Engineer Of The Year award at the 2020 MPG Awards. Like the Lathums, Edmunds is over the moon with a first number one purely under his own steam. “My girlfriend and I did get the champagne out!” he says.

Edmunds conducts his mixes from his own room at Assault & Battery, which has extensive monitoring as well as some choice pieces of outboard. Before diving into the mix of How Beautiful Life Can Be he elaborates on his tools....