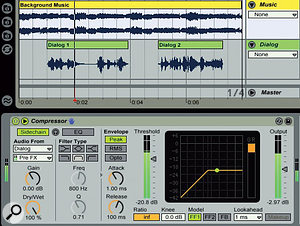 The side‑chain input on Live 8's new Compressor opens up a host of advanced compression options. This month we're going to look at how to use side‑chains for ducking, kick‑drum pumping and more subtle drum and rhythm‑guitar compression.

It's worth keeping in mind throughout that compression is about reducing the dynamic range of an audio clip or mix, not about changing its level, although changing the level is often the end result. Compression reduces the dynamic range by detecting when the signal level rises above a certain threshold, and then reducing the level in proportion to how far above the threshold it is. Threshold detection and the compression ratio — the proportion by which the level is reduced — are the key concepts.

Side‑chain compression turns the process on its ear by using a separate audio input, called the side‑chain input, for threshold detection. The classic example, called ducking, lowers the background music during voice‑overs in commercials, movie dialogue, and so on. We'll start with this because it's a good way to illustrate how to use the side‑chain input in Live's Compressor, and then follow up with some more musical examples. 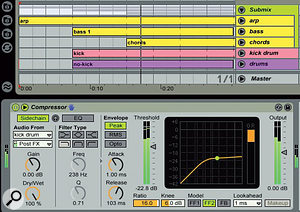 The Submix Group captures all tracks except the drums. The Compressor is inserted on the Group track and the kick‑drum track feeds the Compressor side‑chain input, causing the submix to be ducked by the kick drum. This produces the pumping often characteristic of house and dance music.

Begin by creating a Live song with two audio tracks. Place a background‑music clip on one and some dialogue clips on the other. Insert Live's Compressor plug‑in on the music track.

To reveal the Compressor's side‑chain controls, you'll need to click the round button with the wedge icon located to the left of the device name. To activate the side‑chain input, click the button labelled 'Side‑chain' and select the track containing the dialogue clips from the 'Audio From' menu below that button.

The critical Compressor controls for ducking are Threshold, Ratio and Release. You want the highest ratio ('inf'), which is indicated by the horizontal portion of the orange compression curve, in order to maximise compression whenever there is dialogue present. Set the threshold low enough that the quietest section of real dialogue (not the silence between words) causes the green dot to just reach the horizontal portion of the graphic. Now use the Output slider to set the level of the un‑ducked background music and lower the Threshold slider to set the level of the ducked background music.

You'll want to set the release time to be long enough that the music doesn't pop back up during breaths in the dialogue, but short enough that the music rises reasonably quickly after a patch of dialogue. You may need to automate the Release knob to accomplish that — pushing it up during a dialogue clip and reducing it to around 100ms at the end of the clip. The remaining Compressor controls are not usually critical for ducking; the values shown in the screenshot to the left tend to work well.

To Pump Or Not To Pump? 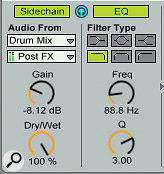 Ducking is a staple technique in dance and house music to make all or part of the mix pulse with the kick drum. It's easiest to set up when you have a separate kick‑drum track to work with.

You can enclose all but the drum tracks in one of Live's Group tracks by selecting those tracks and choosing 'Group' from the Edit menu (Ctrl‑G/Apple‑G). Insert a Compressor on the Group track, activate its side‑chain, and select the kick‑drum track as the side‑chain input. The main Compressor settings are more important here than in voice‑over ducking. A high Ratio, but not quite infinite, and a soft knee smooth the effect. You'll still want a short attack, but tailor the release setting to the music. Increasing the time makes the pumping less choppy, but too long a release blurs the effect.

When you don't have a separate kick‑drum track to work with, the side‑chain section's EQ can save the day. Simply use its low‑pass filter mode (the lower‑left filter type) to focus on the kick drum while suppressing the remaining kit pieces. Most of the kick drum's energy will be in the 50 to 100Hz range, so increasing the Q setting will make it even more prominent. Click the Headphones button between the Side‑chain and EQ buttons to listen to the side‑chain input while you dial in the filter settings. You may also want to mute the rest of the drums to hear only the side‑chain kick.

Pumping can be a curse as well as a blessing. When applying compression to a drum mix, you may not want the kick drum, which often carries the most energy, to pump the rest of the mix. The same thing can apply when compressing the master mix: there the bass and kick drum can both cause unwanted pumping. To cure this, you can turn off the Side‑chain button and use the EQ to high‑pass filter the incoming audio before it reaches the threshold detector. The EQ is not applied to the processed audio, but the Headphone button lets you audition its effect.

A more flexible alternative is to keep the side‑chain input enabled and feed it a submix (drums, for example) that you want to emphasise in threshold detection. In this way, you can use the side‑chain section's Dry/Wet knob to balance between the main signal (the audio being compressed) and the side‑chain signal. Again, the Headphones button lets you audition and tweak the signal being sent to the threshold detector.

This mastering compression setup uses the side‑chain input's Dry/Wet mix to emphasise the drums for threshold detection. High‑pass EQ obviates pumping by reducing the level of the bass and kick-drum frequencies.

The Compressor's built‑in EQ is just one way of processing a side‑chain signal before sending it to the Compressor's threshold detector. And if you're using ducking to bring out a vocal in a song by controlling the background mix level, you'll need a subtler approach than with voice‑over ducking. One option is to compress the vocal separately before routing it to the side‑chain input. When the vocal has significant dynamic range, you may need to apply fairly heavy compression. Of course, you won't want the same compression (if any) to be applied to the vocal in the mix, and you won't want other effects to be used for the side‑chain input feed. To avoid both of these problems, all you need to do is create a new audio track to feed the side‑chain. Insert the side‑chain vocal Compressor on the new track, and designate the pre‑effect vocal track as the new track's input. That leaves you free to add effects such as EQ, de‑essing, and compression to the vocal heard in the mix without having those effects influence the side‑chain feed. 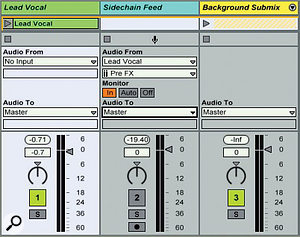 Use a dedicated audio track for the side‑chain feed, mute it from the mix, and route the lead vocal track, pre‑effects, to its audio input.

Any effect in your arsenal is fair game for side‑chain triggering, although the results will often wander outside the box. Let's look at a couple of examples to finish off. The first delays the side‑chain signal used for kick‑drum pumping so that the 'pumps' occur at other rhythmic intervals. The second uses a limiter to bring out the mute strokes in a rhythm guitar track.

To rhythmically offset kick‑drum pumping, create a new audio track to feed the side‑chain, as in the example above, and insert a Simple Delay on that track. Set the left‑channel delay to 1, set the right‑channel delay to 2 or 3, and use a 100 percent wet mix with no feedback. Using the same compressor settings as in the kick‑drum pumping example, you'll now hear pumps on the left that are offset by one 16th‑note and those will be echoed on the right by pumps offset by two or three 16th‑notes. This will not make you popular on the dance floor, but it should sound interesting!

Live's Limiter effect is often a good candidate for side‑chain input processing, because you can get something like the effect of limiting without the artifacts that often accompany it. You can use this to bring out the mute strokes on a rhythm guitar track. Begin by adjusting the Limiter Ceiling so that the unmuted strokes are squashed by 8 to 12dB and then set the Limiter output as the Compressor's side‑chain input and set the Compressor to the 'Opto' envelope mode, with a 3dB soft knee and a moderate compression ratio. Adjust the Compressor's Threshold so that the mute strokes just ride the knee of the curve. This will nicely tighten the track but still leave it sounding natural.