If you are mainly into mainstream pop or classic rock, it is possible that the term 'shimmer reverb' may not even have crossed your radar. For anyone who has the occasional dabble in ambient music, however, having access to one is pretty much essential, especially if you are a guitar player. There are several popular guitar pedals that can create a shimmer reverb effect, but what exactly is it — and can you get the same kind of effect using Logic's own plug-ins? The answer to the second of these questions is certainly 'yes': you can create a very usable shimmer effect in Logic Pro X using the stock plug-ins, and you can even take it one stage further and combine it with a slow‑attack dry sound to give more of a bowed‑string effect if you wish.

Shimmer reverb is, at its simplest, a reverb tail that has been shifted up by an octave, although other intervals can also be useful on occasions, and sometimes the octave reverb is mixed with normal reverb. However, getting it to sound as smooth as the output from a high-end pedal requires more than just sticking a pitch‑shifter after your reverb plug-in. The better shimmer pedals may also add in some filtered delay with lots of feedback, EQ and even compression, so setting up a dedicated effects chain that you can save as a user preset is the way to go. If this is something that you think you might use a lot, you should also add it to your default song template.

The up side of creating the effect entirely in the plug-in domain is that there's no risk of disturbing the reverb tail when you come to edit what you have recorded. If you've ever used a pedal to add a long shimmer reverb you'll know that any subsequent editing can be quite tricky, and that you may sometimes have to add additional reverb to 'hide the joins'. But, for every up side there's a down side too, and if your system obliges you to engage Logic's low-latency mode to allow you to play comfortably, then you may not be able to create this effect in real time, as some of the plug-ins and buses will turn orange and go into hibernation until you disengage low-latency mode again. One way round this is to use an interface with input monitoring so you can hear the dry guitar with no delay, and just ignore any latency that affects the reverb tail. Alternatively, just play the part using a normal insert reverb and then switch on the clever stuff when you're done.

I'll start with the track inserts I use to treat what would otherwise be the dry sound. The wet part comes mainly from plug-ins inserted into an aux track fed from a pre-fader bus send, but in ambient music even the dry sounds benefits from a bit of wet! The bus level control then becomes your overall shimmer reverb wet/dry control. 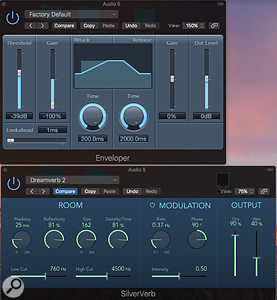 Screen 1: Channel insert effects (both are optional).I rather like the bowed effect created by fading in the start of the dry note, and as you can see from Screen 1 (shown above), I've used Logic's Enveloper plug-in to achieve this. Admittedly it is not the most sophisticated processor, but if you play single notes and set the threshold correctly, you can get each note to fade in smoothly. The Threshold setting will depend on your recording level, so do take the time to adjust it until the envelope triggers reliably on each note. As for the other parameters, I've set both Time controls to maximum and the left-hand Gain fader to -100 percent. You can dial in a slightly faster attack time if you want, but 200ms is the slowest, or longest, you can get out of this plug-in. Alternatively you could record through a Boss Slow Gear pedal or equivalent, but you might not want a slow attack all — it's not a mandatory part of the effect.

In my setup I've followed the Enveloper with an instance of Logic's SilverVerb, just to add a sense of space to the un-shimmered sound. Because we are in the realms of ambient music, you can allow yourself to apply reverb generously as long as you use the low-cut slider to stop the bottom end getting too messy. SilverVerb also includes a modulation section, and the default settings are pretty much optimal. Adding reverb to the otherwise dry sound isn't essential but I find it works quite well, especially if you end up panning the track signal slightly to one side and the shimmer chain slightly to the other.

Now onto the shimmer effect itself, which comprises a chain of plug-ins inserted into an aux channel fed from a pre-fade bus send. This chain starts with a compressor to keep the reverb tail pumped up to a fairly high level. I've chosen to use Logic's Opto compressor, set to apply around 6dB of gain reduction on the loud notes, but you can afford to set it for more gain reduction if you want the start of the reverb tail to maintain a more constant level. Immediately after the compressor comes Logic's Pitch Shifter. Now I know there are better pitch-shifters out there, and if you have a third‑party plug-in that can do a better job, by all means use it. However, Logic's Pitch Shifter works well enough in this context as it is placed in the signal chain before delay and reverb, so those two processes help diffuse any wrinkles in the sound. 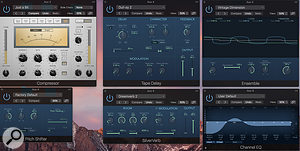 Screen 2: The effects chain fed from the channel's send control.As you can see from Screen 2, I've set a 12-semitone shift but also dialled in three cents of detuning to add a little more complexity to the sound. After some experimentation, I found that the Timing parameter's Pitch Tracking setting worked very well for single‑note lines, while still performing adequately well for chords. The Mix control determines how much shifted sound is sent to the delay and reverb that follow, so for more of the 'octave-up' reverb, set the Pitch Shift Mix control higher, and vice versa. My example uses a 60 percent wet mix. Also experiment with setting the pitch shift to +7 semitones, -5 semitones or -12 semitones, as all give worthwhile variations on the effect.

The delay can go before or after the reverb stage, and here I'm using Logic's Tape Delay with a hint of LFO and flutter modulation plus some fairly aggressive filtering — 580Hz high-pass and 1.6kHz low-pass — to push the delay sound further into the background. The feedback can be set fairly high, but if you find the repeats going on for too long you can always dial it back a bit. Note that the amount of feedback required varies as you change the filter settings, so always set the feedback parameter last.

For the added reverb I've once again chosen SilverVerb as it has a lovely character for ambient music despite being extremely low on CPU load. In fact it takes so little power that I often find myself scattering instances throughout a mix rather than setting up one instance on a send. By setting Size and Reflectivity to maximum, you get a very long reverb tail, but to keep the reverb sounding sweet, I roll off the lows at around 900Hz and the highs above 3-4 kHz. The mix is set at 100 percent wet, 0 percent dry and the Density/Time control between 60 and 70 percent. You can use the pre-delay control to set how long it takes for the reverb to come in after the original note has been played.

Screen 3: The aux channel, showing how the plug-ins are arranged.At this stage you can turn up the send level on your track and hear an added shimmer reverb, but in order to add a little more complexity I've followed the reverb with Logic's Ensemble plug-in, applying a subtle chorus. Try the presets if you don't feel like creating your own setting, but keep one eye on the depth settings for the three voices as you don't want the chorus effect to sound too obvious. Here I called up the Vintage Dimension preset then reduced the depth settings by ear.

Finally I added an instance of Channel EQ to further cut the extreme lows and to lift the 220Hz region to add warmth. You can see the setup I used in Screen 3.

This could be the end of the story, but once you've got to this stage, it can be very rewarding to add some tweaks of your own. For example, Logic's rotary speaker plug-in, found in the Modulation section of the plug-in menu, adds both movement and tonal polish to the shimmer sound. Just leave it ticking over on its slow speed setting and enjoy the rich, fluid sound. Alternatively, put the rotary speaker on the source track and leave the shimmer sound as it was. There are lots of ways to ring the changes with this effect to add the character of organs, string sections or even choirs.

Another thing to try is putting a flanger directly after the Pitch Shifter plug-in but before the reverb, as that adds a sense of movement without the flanging effect becoming too obvious — the reverb breaks it up very nicely. If you want to get really obsessive, you can set up two bus sends feeding two shimmer variations, perhaps with opposite plus/minus detune settings of just a few cents, then pan these left and right. Use different delay and reverb settings to create a super-wide effect.

Shimmer works fantastically well on clean electric guitar or DI'ed acoustic guitar, so you don't need any amp sims or speaker emulators to create something very polished-sounding. It can also be used to add something special to piano parts or spice up FM synth sounds — just be aware that aside from being quite an addictive effect, it can also take up a lot of space in a mix, so try to make sure your arrangements take account of that.

In the righthand Media sidebar to this article, you can download some audio examples I've created showing the shimmer reverb in action, along with a few subtle variations.