Reason is more than just a MIDI sequencing environment; it can also be used for creating new pieces spontaneously from sample loops.

Many people don't think of Reason as a digital audio powerhouse, but as more of a MIDI-based sequencing environment. While it certainly is the latter, there are also several applications usually associated with digital audio that are well suited to Reason, and this month we're going to look at using it for loop-based composition and live performance. 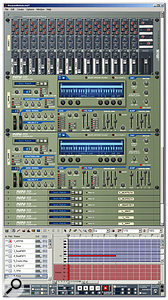 A loop-based composition can be built up on the fly using NN19 sample-playback modules, coupled with Reason's sequencer and some kind of control surface.

Reason As An Instrument

One of Reason 's strengths as a composition 'instrument' is the way you can combine loops with its virtual rack of drum machines, synths and processors, and exploit them via its extensive remote-control options. In this article we'll deal solely with remixing loops, but you can easily use the same approach with MIDI triggering and Reason 's on-board sound generators.

We'll take a workshop approach that lets you learn by doing, and to this end there's a set of eight loops, designed specifically to accompany this article, saved as a Zip file on the SOS web site.

reasontech-0506.zip I suggest downloading the loops and using them to explore the following techniques, but you're free to use your own loops instead. What we'll do is create a rack containing eight NN19s; load each with a unique loop; set the sequencer to play the loops continuously; then configure a control surface to bring them in and out as desired, to create a composition.

Reason has only one option for time-stretching loops without forcing a pitch change: the Dr. REX player. If all the loops you want to use are in REX format, that simplifies matters. However, the chances are that you'll want to use some Acid ised files or standard WAV or AIFF files, which means that first you'll need to either convert these to the REX format or cut them to the proper length for the Reason project tempo.

My tool of choice for creating sample-accurate loops of the right length is Sonar — and not just because I write Sonar technique articles for SOS! I can import digital audio files into Sonar, use its loop-construction window to stretch them to the desired tempo, then save them as standard WAVs. As they've been stretched to the correct length, I'll then be able to use them properly in one of Reason 's samplers.

There was almost no official Reason news at the recent NAMM show, other than the announcement that the excellent Reason Drum Kits 2 is shipping. However, one item of interest is that the REX format is gaining momentum. REX-file support from other companies is increasing (Sonar 5, for example, includes a REX-file player) and a growing number of sample libraries are including REX files, along with Apple Loops and Acid ised files. In fact, for some companies (particularly Big Fish), the 'Holy Trinity' for sample libraries is now WAV, REX and Apple Loops, so there are now more options than ever for feeding your Dr. REX.

First we'll set up the instruments, by loading the samples we want to use.

1. Download the example loops, as mentioned above, if using them. Save in an appropriate folder.

2. Load the Reason template document 'Empty Rack.rns'. You'll find this in the Template Documents folder, located in the Reason folder on your root drive.

Click on the Browse Sample button to load an individual sample into NN19. 3. Go Create / Mixer 14:2.

5. Minimise the sampler, by clicking the little arrow in the far left of the device panel, so that it takes up less space.

6. Repeat steps four and five until there are eight NN19 s. (You could also click on a rack ear, press the Option/Control key and drag another NN19 into the rack. However, this won't auto-patch it into the mixer, nor will it automatically create another sequencer track, so the time saved by drag-copying samplers is offset by the time required to patch them into the rack.)

8. Locate Loop1.wav in the example files. Load it into the NN19 by clicking on the file, then clicking 'OK'. Note that you can audition the file before loading.

10. Continue using the same procedure to load the eight samples into the eight NN19 samplers.

11. Hit the Tab key, so that the rack swings around to the back, and verify that all patching is correct. Patch the Mixer outputs to the Audio Out section, if needed.

The next stage is to create a sequence that will trigger all loops continuously. The loops I've made for this project are all four measures long, except for the eighth loop, whose duration is eight measures. 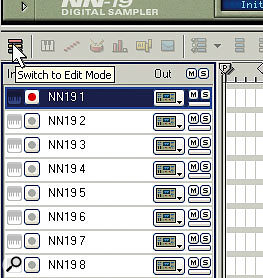 Switch to sequencer Edit Mode so that you can see individual tracks, rather than the entire arrangement.Now let's create a sequence to trigger the loops. You'll probably find the following easier if you set Snap to one bar, by selecting 'Bar' from the drop-down menu to the left of the magnet button in the sequencer. The magnet button must be 'in' for snap-to-grid to be enabled.

1. Set Reason 's sequencer tempo to 133.33bpm, which is the tempo at which the loops we'll be using were created.

3. Switch to Edit mode, by clicking on the Mode button in the upper left of the sequencer window (see screen below).

5. Draw a note at C3 with a duration of four measures.

6. Click on the velocity value for this note and drag it up to 127.

7. Select the Arrow tool. Click on the note, press Option/Control, then drag the note to the right to create a second note, four measures long, that starts at measure five and ends at measure nine.

10. Set the Left loop locator at measure one and the Right at measure nine.

Now we're ready to verify that all the loops are playing back properly. This will also give us a chance to get familiar with the loops, before starting to create a 'remix' with them.

1. To the right of the transport's Record button, click on the Loop On/Off button so that it's lit. 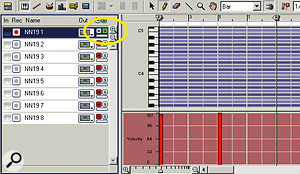 Solo each track individually as you audition it, to make sure that it's looping seamlessly. 2. Double-click on the sequencer Stop button, to send the Play cursor back to the beginning.

3. Solo the track ' NN19 1' and click on Play. The cursor should play through to the start of measure nine, then jump back to the beginning. The track will play continuously because Loop On/Off is on.

7. Audition tracks three to eight in the same way you auditioned the first two tracks. Remember to double-click on Stop each time, to send the cursor back to the beginning of the sequence. If playback begins in the middle of a note, you won't hear anything because the sequencer will not have 'heard' the note-on event that triggers the sample.

8. If all is well, turn off any Solo buttons that are on, so that all tracks are available for playback.

You can also do this kind of on-the-fly loop re-combining while Reason is Rewired to a host sequencer. This means that you could record your controller moves and keyboard keypresses into the host if you wanted to take advantage of programs that offer deeper MIDI editing than Reason, or if you later want to add overdubs with acoustic or electric instruments (as you can't record audio in Reason).

However, it's crucial to remember that Remote Override mode is unpredictable when Reason is Rewired, because if you remap a parameter to a controller number and that controller number is 'normalled' to an existing parameter, both parameters will be affected when you control the first remotely. When Rewiring, I strongly suggest avoiding the Remote Override function and instead using the controller assignments listed in the MIDI Implementation Charts.pdf document. You can find this (assuming a default installation) by going Program Files / Propellerhead / Reason / Documentation. The implementation chart doesn't mention which keyboard keys control which buttons, but it's not difficult to find out: just run your fingers across the keyboard until you find the keys that affect the desired buttons.

Setting Up The Control Surface

This is perhaps the most crucial part of the process, because spontaneous loop-based composition (or on-the-fly remixing) depends on being able to make split-second changes, as you go along, that flow with the music. You need a simple setup that doesn't get in the way of the creative process, but one that has enough options to ensure you don't feel too limited.

There are many ways of setting up a control surface for remixing, depending on your musical style and how you like to work. When remixing with Reason, my favourite controller is the Peavey PC1600x controller, a venerable and extremely hardy box that offers 16 programmable faders and 16 programmable buttons. I assign the faders to mixer-channel levels and the buttons to mixer-channel solo buttons.

However, 16-channel fader boxes tend to be the exception rather than the rule these days (most controllers emphasise eight-channel operation) and it's fairly unlikely that you'll have a PC1600x yourself, so we'll base the following around M-Audio's Oxygen 8 controller keyboard, because it's so common (and Reason supports it). You can, however, use the same basic idea with whatever control surface you have available. With the Oxygen 8, we'll assign its eight knobs to the eight Reason mixer faders and the Oxygen 8's keyboard keys to Reason 's solo buttons. 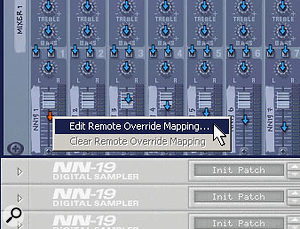 Although Reason has 'normalised' control assignments, you can override them and create your own. 1. Arrange the Reason Mixer so that it's easy to see, then Go Options / Remote Override Edit Mode. Reason turns a lovely shade of ice blue.

2. Right-click (Mac users, use Control-click) on the Mixer's first fader and select 'Edit Remote Override Mapping' (see the screen above).

3. In the dialogue box that appears, select 'M-Audio Oxygen 8' for the Control Surface (or whatever else you're using) and 'Knob 1' for the control, then click on 'OK'. If you want to take advantage of labour-saving technology (or are using an unsupported control surface), just click on 'Learn from Control Surface Input' and move the controller knob to have Reason 'learn' whichever physical controller you want to use.

5. In the dialogue box that appears, select 'M-Audio Oxygen 8' for the Control Surface and 'Knob 2' for the control, then click on 'OK'. 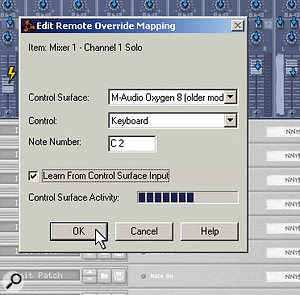 It's possible, in Reason, to assign keyboard keys to on/off buttons, such as Solo and Mute.

9. Click on 'Learn from Control Surface Input' and hit the keyboard key you want to use to control the solo button (for example, C3). The Control Surface Activity indicator will show that you're hitting a key. Then click on 'OK' (see screen, right).

10. In a manner similar to steps nine to eleven, assign the solo buttons for channels two to eight to Oxygen 8 keyboard keys.

12. Move the knobs and play the keys, while observing Reason 's mixer, to verify that all the knobs and keys control the desired functions.

All the preparation work is done, so let's run through actually using the setup.

1. Start with all the knobs fully counter-clockwise, except for Knob 1.

2. Double-click on the transport's Stop button.

3. Click on Play and the first loop should start playing.

4. Now move the knobs, solo individual channels for breakdowns, and so on.

Once you're used to the process, you'll probably want to expand your horizons by patching signal processors between one or more NN19 s and the mixer. Then you can manipulate the processor controls in real time, to add more variety and interest.

Mastering Essentials Part 3 - How loud should I master?
1 week 3 hours ago.