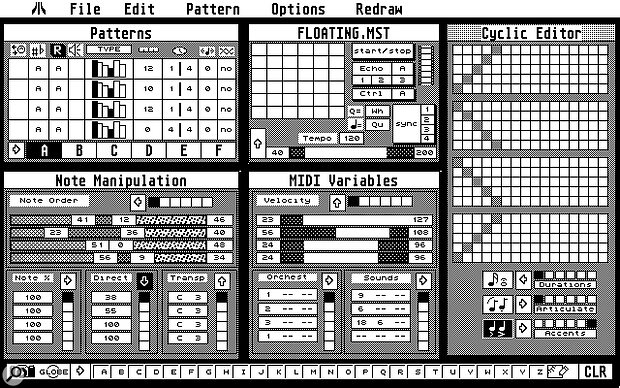 M can produce compelling musical results with a minimalist feel, and its Atari version is now distributed free with the blessing of the authors.

Anyone who has glanced at this column over the years will be aware that the Atari ST has attracted, and continues to attract, people who want to create music in non‑standard ways. From simple simulations of '70s‑vintage analogue‑style step sequencers to full algorithmic composition tools, the Atari has seen its fair share of innovative music‑creation programs.

One of the best‑known pieces of algorithmic composition software is M. During the '80s it was available for both Mac and Atari, but it eventually disappeared. Significant underground interest, however, caused one of its authors, David Zicarelli, to revive and continue developing the Mac version, and it's now available from his Cycling '74 web site (home of the Pluggo Mac plug‑in family). This revival led many to wonder what became of the ST version. The good news is that although no further development has happened on the Atari version, David and Eric Ameres, who ported M to the ST, have sanctioned the free distribution of a 'liberated' copy of v1.1 of M (from 1987). It has all the appearance of a pirate (and is, in fact), but David and Eric say it's OK. Thanks to Tim Conrardy for this news. You can visit his web site (atari.atlantis‑bbs.com) to download the software.

Those of you with long memories may recall that, although M could produce interesting, complex, evolving results, leaning heavily on minimalism, it was tricky to work with — in the same way that the Interactive Phrase Sequencer module of Steinberg's Cubase is tricky to work with. Though it doesn't seem quite so unapproachable at the start of the 21st century, it still takes some getting used to. However, once you've taken time to explore and appreciate the interactions of the available parameters, M is fun and rewarding. In a nutshell, the program offers four Pattern 'tracks', for which you provide the musical material. You then tell the program how to manipulate that material, which could be single notes, chords, a real‑time performance, a step‑time or drum machine‑style pattern, or an imported MIDI File.

Almost all the action takes place in one screen, sub‑divided into five windows. The top central Control window is where you start M, and adjust its tempo. Here you'll also find a 'conductor' grid, which lets you use the mouse to change parameters in real time. To the left of this is the Pattern window, where you input notes and alter various Pattern parameters — clock delay, muting and so on. In the Note Manipulation window you can influence note playback order, length, playback direction and transposition. Next is the MIDI Variables window, where data such as velocity response, MIDI playback channel, and program changes can be set up. 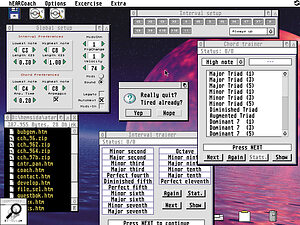 Train your ears with the newly enhanced version of HearCoach.

Thus far, raw note data is already being transformed and should be producing some interesting patterns. But with the last window, Cyclic Editor, M really gets good. Note duration, articulation and accents can be altered here using a 16‑step by five‑value grid (though you don't have to use all 16 steps). Once you've got the hang of it, manipulated data starts taking on a musical life of its own.

This isn't even the sum total of what M provides. Not only can you alter the above‑mentioned parameters in real‑time as the program plays, but there are also six variants for nearly all manipulation tools, which can all be selected on the fly. There's also a snapshot facility for those moments when you've tweaked M to produce something amazing and daren't go one tweak further for fear of losing it. You can use snapshots for simple mixing tasks, too.

Now that you've got your instant Terry Riley, what about exploiting an M performance in a wider context? The software will sync or be synced from an external MIDI sequencer or drum machine, and was sufficiently advanced for the time to also offer MIDI File export, which makes life somewhat easier for M users running a traditional software sequencer. Use an M performance as the basis for further development, or simply extract the bits you like best.

There's only space here to scratch the surface of a program with so much potential complexity. A review of M v2.0 for the Mac appeared in SOS August 1988, if you'd like more data. I hope you'll go and have a play with the program — I will.

More news from Tim Conrardy — his site offers the M download — is that he's started an Atari MIDI mailing list, hosted by One‑List. Full details can be found at www.onelist.com/group/atari‑midi.

Back in March, I mentioned a recent version of Joakim Högberg's HearCoach ear‑training package, and now it's been enhanced further. There are no new exercises — the software offers interval and chord training — but with v0.97b, the chord trainer has been improved (up to 50 chords per session, and chords loadable from a separate file). The user interface has been enhanced, and attempts per interval for the interval drill are now shown in a statistics window.

This may be the last update for a while, as future development (such as the addition of rhythm and scale exercises) will depend on feedback and users paying the small US$3 registration fee.