Marker Locations are displayed on the Marker ruler, and can be colour-coded to make song structure obvious at a glance.

Exploiting Memory Locations to the full will revolutionise the way you work with Pro Tools.

Memory Locations provide a very powerful way to navigate Pro Tools sessions. Within each session, you can store up to 999 Memory Locations, which can be used to recall Markers to important locations in the session, and can be displayed on the marker ruler. This is very helpful in displaying the geography of a song or other project, and in letting you quickly jump to specific points in the session. But Memory Locations can do much more, too. With the aid of Memory Locations you can edit selections across one or more tracks; set record and play ranges, along with pre- and post-roll times; store and recall track settings that include show/hide status, track heights and zoom values; enable Edit and Mix Groups; and recall Window Configurations. 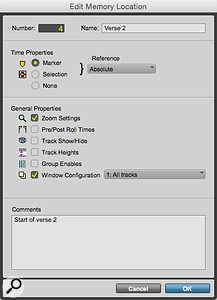 When a Memory Location is added you will usually see this dialogue, unless you’ve created it whilst playing back the session and Auto-Name Memory Locations When Playing is enabled.

The final type of Memory Location is None. Because this type is not tied to any particular object or position on the timeline, it enables you to access and control a wide variety of other properties such as show/hide status, track heights and zoom values, Edit and Mix Groups enables and Window Configurations. 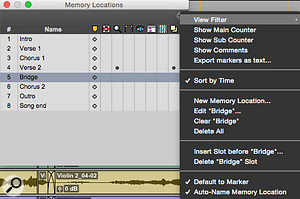 The Memory Locations window is where locators are sorted, viewed and recalled. They can also be recalled by clicking a specific Memory Location in this window, and if you hover the mouse, any Comments information appears in a separate floating box. However, there’s also a keyboard shortcut system we can use instead. To get the most out of these shortcuts, you’ll ideally need a keyboard with a numeric keypad. In essence the keypad’s full stop (period) key primes Pro Tools to accept and confirm a locate number, and its Enter key allows you to enter a Memory Location. This allows you to instantly add Memory Locations at important points during tracking, simply by hitting a key. 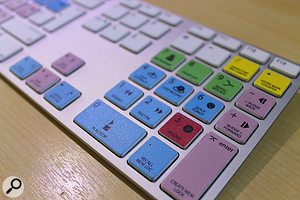 Functions relating to navigation and Memory Locations are mostly accessed from the numeric keypad.

There are two further ways of creating Memory Locations. One is to use the drop-down menu in the Memory Locations window, and the other is to click on the ‘+’ icon at the start of the Markers Ruler.

Memory Locations are a powerful and flexible tool, and it’s worth developing a system for using them consistently across sessions and getting the most from them. For instance, you might use the ‘tens’ for the verses and the ‘twenties’ for choruses, so in any song you work on, verse three would be Memory Location 13 and the third chorus is always Memory Location 23.

When appropriate, when you know the structure of the song and/or you have a guide track to work to during the preparation work for a session, you can pre-load your session with appropriate Memory Locations for all the key points in the session. Running and managing a session is much easier when you can jump to the third chorus with a couple of button clicks.

If the Memory Locations can’t be created in advance, it is possible to enter them on the fly during the first playback. If you have Grid editing mode enabled, they will snap to the grid. Normally, whilst Pro Tools is playing, you can create Memory Locations by just hitting the Enter key on the numeric pad — this is one of the few areas in Pro Tools where the Enter and Return keys do different things. However, hitting the Enter key during playback will allocate the next unused Memory Location point, which might not coincide with the number you want to assign if you’re using a system such as the one that I’ve described above.

To get around this, hop over to the Edit tab in the Pro Tools Preferences and untick the Auto-Name Memory Locations When Playing option. Now the position of the Memory Location is still set when the first Enter key is pressed, but then you can enter your own number, after which you’ve got about four seconds to press Enter a second time.

However, there are other occasions when the feature to automatically name locations is very useful. At the point you hit the Enter key on the numeric keypad, a Memory Location is created and auto-named all in one hit of the Enter key. This is great when you want to mark where you want something to happen. For example, when I am working in post-production, I will play through the session and hit the Enter key at the right time. This will give me a location point with a nice vertical yellow line with which I can line up whatever I want to happen at that point.

Having created Memory Location markers at all the key points in your song, it is possible to use the colour feature in Pro Tools to fill the Marker ruler and make the structure of the song even clearer. Open the Color Palette and you will see that you can choose to set the colour of a range of elements in the Pro Tools windows. You may find that the Markers option is greyed out, in which case you can visit the Display tab in Preferences and enable the Always Enable Marker Colors option.

With this option enabled, as you create Memory Locations, a different colour fill will be applied on the Marker ruler between each Marker. If you don’t like the default colours, highlight the Marker area you want to change the colour of, making sure to include the Marker at the start and a small segment of the ruler before it. Now you will see the current colour highlighted in the Color Palette window; choose a new colour from the Color Palette and that section will now take on the new colour. As with the location numbers, consider using a consistent colour-code system that will make it easier for you to know where you are in the project.

This is particularly useful with ‘timeless’ Memory Locations that are not tied to a specific object or point in the timeline. We’ll be looking in more detail at what you can do with these in next month’s workshop.

Using the Enter key to drop a Marker is the shortcut I always missed the most when using a laptop with Pro Tools. I have had several MacBook Pro machines over the years, and also always advised my clients to buy an extended keyboard so they had access to the numeric pad for creating and recalling Memory Locations. So imagine my joy when I discovered that the ‘fn’ key on Mac laptop keyboard can be used to implement exactly this feature. Hold down the ‘fn’ key on a Mac laptop, and the Return key behaves as the numeric Enter key instead — so you can drop Markers on the fly after all! How cool is that?

Like tracks, Memory Locations with positional references can be locked either to the bars and beats ruler or to the time ruler,

using the Reference pop-up. When set to Bar|Beat, the Memory Location is tick-based and its bar and beat location remains constant even if the tempo is changed. When set to Absolute, a Memory Location is sample-based and its sample location remains constant, along with its relation to audio material. In the Markers ruler, Bar|Beat locations appear as yellow chevrons, and Absolute ones as yellow diamonds.