It is great to see Avid innovating again, with the launch of Pro Tools 12.3. Over the coming months we are going to look in more detail at what you can do with the new features added in this latest version, beginning with the brand-new Commit Tracks feature. 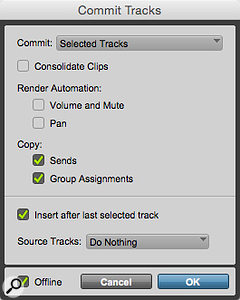 Screen 1: The new Commit Tracks dialogue in Pro Tools 12.3 is accessed by right-clicking a track name.

Most other DAWs have long offered some sort of ‘freeze’ function, whereby virtual instruments and plug-ins on a track can be temporarily or permanently rendered to an audio file to free up CPU cycles. You could argue that today’s powerful computers mean such a feature is no longer needed so much, but Avid have put a new spin on the same idea with the Commit Tracks function. However, they’re at pains to point out that Commit Tracks isn’t Track Freeze, which will be implemented in a later version of Pro Tools, probably as part of Cloud Collaboration. For the most part, though, Commit Tracks achieves the same thing and enables us to do some clever stuff.

The Commit feature in Pro Tools creates a new audio track that contains the audio rendered from the output of the source track, including any real-time processing such as AAX plug-ins. This is very useful for freeing up processing power on your system, as well as for sharing sessions with other people whose systems may not have all of the plug-ins used in the session.

The following source track data is always copied to the new track when committed:

You can commit audio, auxiliary input and instrument tracks, plus MIDI tracks that are routed to an instrument plug-in within Pro Tools. Even better, Commit Tracks is undoable. Let’s have a look at how it works with virtual instruments: these can often be resource-hungry plug-ins, so committing can recover some memory and CPU cycles for other things, as well as allowing you to share those tracks with other users who don’t have the same virtual instruments.

If you right-click on a track name in the Edit or Mix window, the contextual menu that pops up now contains a Commit option. When you select Commit, a new Commit Tracks dialogue opens, where you configure what will happen when the track is rendered. If this is set to Selected Tracks, Pro Tools will attempt to render everything audible on that track, including reverb tails, long note decays from virtual instruments and so on, meaning that the rendered clip on the new track might well be longer than the source clips. If you select Edit Selection, the clips in the new audio tracks will be the same length as the source clips, with any tails cut off. There is also the option to Consolidate Clips: if you leave this unticked, Pro Tools will create separate audio clips for each active clip in the source track. With Consolidate Clips checked, you will get one clip. Finally, the Render Automation options let you choose whether pan and/or volume automation on the source tracks should be rendered into the new audio tracks.

Screen 2: The results of choosing different options within the Commit Tracks dialogue. In the first, third and fourth examples, I’ve chosen to commit the track rather than Selected Clips; as you can see, Pro Tools has made the rendered clips longer than the source MIDI clips, so as to include the decay of the last piano notes. In the first, second and fourth, I’ve chosen to consolidate the rendered clips, so Pro Tools has rendered a single clip for the entire track. And in the first example only, I’ve chosen Copy Sends.

You also get to decide what Pro Tools will do with the source tracks. Choosing Hide & Make Inactive will put them out of sight and out of hearing, which is what I normally do, but if you would prefer to be able to still see the source track you can just make it inactive. Alternatively, you can choose to do nothing, but then you’ll be hearing the same audio twice unless you mute the source track. You can also choose to delete the source track, which you may prefer to do if you are preparing a copy of a session that needs to be as clean as possible.

Like the Bounce window, the Commit Tracks dialogue gives you an Offline option, which will render the new audio track faster than real time. How much faster depends on your computer, what instruments and plug-ins you are using, and how many tracks you are processing at once. In this context I can never see a situation when you would want to not use Offline.

Everything I have mentioned so far works the same way with audio, aux and instrument tracks. However, Pro Tools 12.3 also offers a neat shortcut for the latter: simply drag MIDI clips from an instrument track onto an audio track and Pro Tools will automatically commit them to audio. In Screen 3, I have dragged the clip on the ‘Piano Right Hand’ instrument track down onto the Audio 1 audio track;

Screen 3: Simply by dragging a MIDI clip from an instrument track onto an audio track, I can create a rendered version of it! as soon as I let go of the mouse button, Pro Tools renders out the audio version.

Another neat option is Commit Tracks To Insert

, which is very useful if there are some inserts you’re not certain about, or if you want to render out an instrument but leave the audio processing plug-ins in place. To access this feature, right-click on an insert on a source track. You will then see the Commit Tracks To Insert window, which has the same options as the normal Commit Tracks window. Configure it appropriately and then hit the OK button. In my screenshot, I’ve right-clicked on the Xpand! v2 instrument plug-in, so Pro Tools will then render out the audio from this instrument, but copy the other two plug-ins, the Audified U73b compressor and Waves Renaissance Bass, with their settings, onto the new audio track along with my reverb send settings. (In these examples I deliberately chose the Do Nothing option for the source track so you can see the source and rendered tracks and their settings.) While Pro Tools is undertaking the rendering, any remaining plug-ins are temporarily made inactive, but as soon as the render is complete, the plug-ins are reinstated. Supposing I was collaborating with someone who didn’t have the Audified U73b plug-in, I could have chosen to commit up to that insert point, ending up with an audio track with just Waves Renaissance Bass on it.

A new section of the Processing tab of the Pro Tools Preferences window determines the word length of new audio files created using the Track Commit command. When Always Use 32-bit is chosen, new audio files created using Track Commit will have a 32-bit word length regardless of the session setting. Since the mixer in Pro Tools 12 is 32-bit floating-point, Avid recommend this option to ensure that what you hear on the source track is exactly what you get on the committed track.

However, you can also choose to have rendered audio Follow Session Settings, so new audio files created using Track Commit will have the same word length as audio recordings made in that session. This makes it possible for the committed audio to clip, since you might be changing the bit depth of the audio files created from 32-bit floating point to 24- or even 16-bit, but you may still want to choose this option if you need to have all session audio in the same format.

Does committing a track produce a perfect copy? The simple answer is nearly always yes, but it does depend on a number of issues and there are a small number of situations where it won’t be exactly the same. In particular, plug-ins that have a time-based or random element to their output won’t sound the same every time. Rendering these plug-ins accurately captures their output on one occasion, but if you run this alongside a live version of the same track, it probably won’t null, because the live version won’t sound identical second time around.

Next month we will look at the remaining Commit Tracks features and how they can be used to create future-proofed archives.