Get creative with sends and buses in Sonar X3.

Although track features usually get the lion's share of interest in any DAW, we shouldn't forget about buses. This month, we'll be taking a look at some tricks involving buses that will help make them even more productive citizens of your Sonar world.

One situation in which they can be very useful is if you need to chain EQs. When mastering, for example, or if you're trying to make a humbucker guitar pickup sound more like a single-coil, four bands of EQ usually aren't enough. Furthermore, Sonar's brickwall filter stops at 48dB per octave, and you might want an even steeper 96dB-per-octave curve. Fortunately, because Sonar's ProChannel exists in both tracks and buses, sending a track to a bus lets you obtain two ProChannel EQs in series.

My typical mastering process is to bounce all my tracks to a single track, solo the track containing the final mix, and then assign its output to the Master bus. Next, I call up Console view (which provides the most efficient visual environment for the following process), and position the track with the final mix and the master bus next to each other. With their ProChannels flown out, I then slide the strip for the assigned final hardware master output to the right of the track and bus strips.

Now it's time to start working on the EQ. Here are some items of interest about this setup:

The technique of bypassing the effects brings up the possiblity of another interesting trick. Note the Tube module inserted in the master bus's ProChannel. This can usefully provide level balancing, for comparing your mastered and unmastered versions, which can be very helpful in evaluating the effectiveness of your tweaks. To set this up:

It would be even better if you could choose between balancing the average or peak levels, but as peaks are often what matter in today's singles-oriented world, this gives a reasonable degree of level-matching. When all your effects are exactly as desired, remove the Tube module, verify the final audio levels with the mastering effects active, then bounce or export the final mix.

If you want to bounce the mix with your mastering processes applied, make sure that only the track with the entire mix is selected. In the Bounce to Track dialogue box, choose Main Outputs as the source category. I generally like to choose Audible Bounce so I can hear the mastered mix one last time and make sure it's correct.

Note that if you bounce the mix to another track instead of exporting it, type E before listening to it to make sure you're hearing the mix without the master effects.

However, this brings up a semi-related point: having different setups in the Console and Inspector can often be helpful. For example, I usually want to see multiple sends in the Console for tasks like adjusting reverb on various tracks. In this instance, being able to see two sends in the Inspector is far less useful, so under the Inspector Display option I untick Sends / Bank / Patch. This opens up room to choose the Inspector's Module Options / FX / Show Assignable Controls, which I don't show on the Console because I

Use Track Control Manager to create a view that's optimised for showing lots of sends. In this case, the drums are sending to a variety of effects with sidechains. tend to adjust effects controls on a track-by-track basis. Furthermore, until the mastering process I often don't show the FX Bins, ProChannel, or I/O in the Console; these are again modules that I tend to edit for individual channels, making them ideal to show in the Inspector. With this type of approach, the Console becomes like an old-school console for gain, sends, mixing, and automation, while the Inspector becomes much more of a detailed editing tool.

If you have a project with a lot of sends and you want to see as many of them as possible, Track View is the answer. But first, it's best to create a custom track pane view. Click on the track control button that selects the different views, then choose Track Control Manager from the drop-down menu. Click on New, and create a view called 'Sends' or 'Sends + Buses', depending on which you enable. For the Audio Strip widgets, untick everything except Aux, Out (if you want to see buses too), and maybe one more option, like MSR. Note that you need at least one widget selected other than just Aux, so that the track header sits on top of the bus strip rather than to the side — if it's on the side, you can't see as many buses at once. Now, in Track View, widen the track pane until you see the desired number of sends.

You can add widgets other than MSR, like Volume, Edit Filter, or whatever, but that makes for a pretty cluttered view. If all you want to do is adjust sends, keep it simple.

I'll leave you with two simple tips. To make it easier to find and identify which bus a track is assigned to, click on a track or 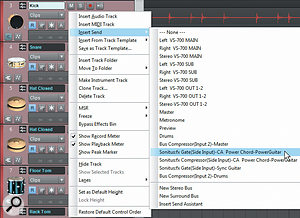 You don't have to create buses to feed effect-sidechain inputs — Sonar does it for you. console channel's colour strip, then click on Follow Bus. Whatever colour you select for that bus will now be adopted by all tracks connected to that bus. I find this useful primarily for drums and harmony vocals, which almost always go to buses. Be aware that this applies only to buses, not to sends (even though, technically, they are indeed buses).

Finally, when you insert an effect with a side-chain input (such as a compressor), Sonar will automatically create a bus that terminates in the side-chain input. Calling up the Insert Send menu for a track then adds all the side-chain inputs to the list of existing sends, making it easy to use one track to trigger the dynamic processing on another, for example.