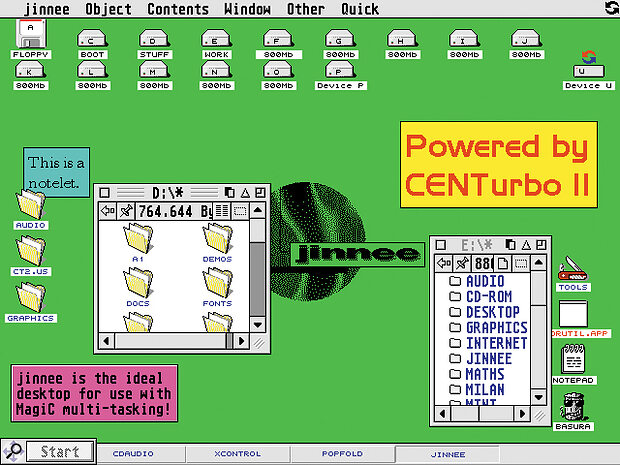 Derek Johnson reports on Atari shows in Stafford and Germany, and rounds up some more ST and Falcon news.

Most of the news in this month's column has been sparked by April's All Micros Show at Stafford's County Showground, which incorporated an Atari‑specific element. Unfortunately, I wasn't actually able to attend this time — but I know a few people who did!

Though not quite as buzzing on the Atari front as last November's AMS, stand holders still report brisk business. It was a good day for Keychange Music, who tell me that their stock of legit copies of Steinberg's Cubase v3.1 have been going so well at just £149 a pop that they may have to restock. Cubase users will also be interested in Keychange's Proper Job MIDI expander: this adds a MIDI In and three MIDI Outs to the Atari's one of each, and costs just £99. At present, this interface is for Cubase only. If one MIDI Out is all you need, the Proper Job MIDI modem cable (£15 for a 2m cable) is for you; this option will also work with Emagic's Notator. As always, Keychange are keen to let the '90s Atari user know that they can provide hard drives, replacement mice, hi‑res monitors, CD‑ROM drives, remote keyboards and rackmounting options.

Also present at the show were ASP (Abingdon Synthesis Projects). They're still pushing the nifty serial mouse interface, which for £19 allows any PC pointing device — trackball, touch pad or whatever — to be used with your Atari. The serial mouse interface is part of a whole range of adaptors and interfaces which originates from Mario Becroft in New Zealand. The range includes an IDE hard disk interface and VGA monitor adaptor (£15). The IDE interface costs £50, plus installation and hard drive, and is designed to work with 2.5‑inch drives for completely internal mounting. It's apparently a straightforward plug‑in‑and‑go job for STEs, though STFMs and Mega STs require a little soldering. The interface comes with driver and partitioning software, and supports TOS 2.06 for booting from IDE drives.

Coming soon from the same source will be a PC AT keyboard and mouse interface. With the interface, any PC AT keyboard can be connected to an Atari STFM, STE, Mega ST, Mega STE, TT, Falcon or compatible computer, with no special driver software required — just plug it in and go. The unit supports the standard Atari mouse or any MS or PC serial mouse. A joystick connector is also provided to accept a standard Atari joystick. In addition, a special mode will allow operation of mouse or joystick using the numeric keypad, even if no mouse or joystick is actually connected, and some Atari keyboard bugs have been fixed (such as reverse mouse movement when moving the mouse quickly). The price for this useful interface has yet to be set.

Incidentally, Mario Becroft's own web site also hosts the Auckland‑based Tariland Atari club. (www.ak.planet.gen.nz/~mario/tari...). Not a whole lot of use unless you live in Auckland, but there's a comprehensive collection of Atari links there — and if you do live in Auckland, membership costs just NZ$30 a year 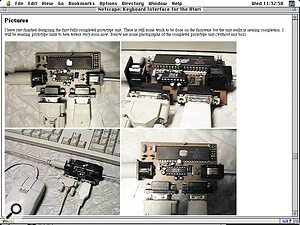 Mario Becroft's forthcoming PC AT keyboard and mouse interface, in prototype form on his web page.

As expected, System Solutions were at the Stafford show, though they report not a lot of activity on the music front. Electronic Cow's Squash It! sample editor was being demo'd on a Centurbo II accelerated Falcon, along with other System Solutions‑distributed audio hardware and software, particularly the Line Audio range of audio interfaces for the Falcon. Incidentally, Line Audio's Jam Out 8 multiple output box and JamPro in/out convertor now feature 24‑bit DACs. This Swedish company are also producing an affordable condenser mic — the CM2 — and are due to release a well‑specified 2‑channel mic preamp that will, in the future, have an S/PDIF output option.

Milan, the fast TOS‑clone available through System Solutions, was reported to be running Cubase on several stands; SoundPool, whose products are also distributed by System Solutions, have just released a Milan‑specific version of their CDRecorder software. CDRecorder can be used to produce ISO9660, Atari, DOS, mixed format and Red Book‑format audio CDs. System Solutions are doing some special offers if the software is bought with a CD recorder.

Possibly the most interesting new release on the System Solutions stand was the jinnee replacement desktop; the English version of this long‑awaited software was finished just in time for AMS. The best bits of MacOs and Windows 95/98 desktops have inspired jinnee, which also appears to have hoovered up all the best bits from competing Atari alternative desktops. Whilst jinnee will work with any TOS‑based machine, it's been designed to complement the alternative multi‑tasking operating system MagiC 6 (both pieces of software come from German company AS‑ Applikation System Heidelberg), and works most efficiently in a MagiC environment. Features include: spring‑folders for simple directory navigation, desktop notelets with GDOS font support (vector fonts available with NVDI 5), transparent dragging of objects, custom icon creation and management, Kobold v2.5 (or higher) support for fast file copying, and background images in windows. Almost every feature of jinnee is customisable. The software costs £29.95, or £89.95 if bundled with MagiC 6 (shipping is extra). 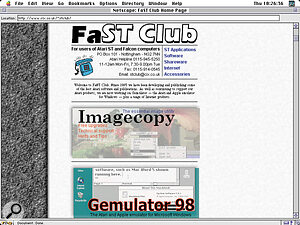 Visit FaST Club on line, home of the Floppyshop Gold collection of CD‑ROMs.

As many of you may know, the Atari side of AMS was co‑organised by Atari Computing magazine. The team have certainly been busy lately: we might have had to wait a little while for the bumper 64‑page issue 12, but hot on its heels is issue 13. This isn't exactly skinny, at 56 pages, and features the usual range of ST and Falcon news, reviews, features and advertising. Music coverage includes a review of Electronic Cow's Squash It! sample editing software, if you'd like a second opinion (it was reviewed in this column in April), and Softjee's Falcon‑only virtual MIDI sound module, Expand v1.04. Details, as usual, can be found on the AC web site (www.atari.computing.com) or by contacting Atari Computing Subscriptions, 73 Bentinck Drive, Troon, Ayrshire KA10 6HZ.

And I note that Atari Computing are still advertising copies of Steinberg's venerable Pro 24 III sequencing software at a knock‑down £10.99 as a readers' offer.

There's no real software news from Electronic Cow this month — I'm expecting something interesting for next issue — but we can tell you that they've had a change of address. All your bovine needs can be accessed via: Electronic Cow, 5 Exhall Close, Church Hill South, Redditch, Worcestershire B98 9HY. The company's telephone numbers (01426 281347 and 0411 544133) remain the same, as do their email address (electroniccow@dial.pipex.com) and web site URL (ds.dial.pipex.com/electroniccow/cownet.shtml).

Noted ST PD library Floppyshop may have shut up shop a couple of months ago, but their influence is still felt in the Atari world. Last month, we heard that the PD library itself had been passed on to another library (Falcon's NeST PDL, +44 (0)1945 780203, falconsnestpdl@hotmail.com), and that Electronic Cow will be distributing the Sounds And Stuff music, audio and MIDI CD‑ROM collection. Now the fate of Floppyshop's remaining stock of commercial software and the distribution rights to most of their CD ROMs is known: the lot has been acquired by FaST Club, one of the oldest public domain libraries in the UK. This is especially good news if you're interested in collecting the seven‑strong Floppyshop Gold CD‑ROM series, an impressive set which gathers together pretty much the entire library of Floppyshop ST and Falcon PD software as of late last year. Pricing and so on isn't yet known, so contact FaST Club (information below) for full details.

If you feel nostalgic for Floppyshop, you could always visit the memorial web site (www.floppyshop.cyberstrider.org). The site summarises the Floppyshop story, and provides a comprehensive collection of links to many ST user groups, PD libraries and retailers.

The Atari‑Messe 1999 (www.atari‑mess.de) in Neuss, Germany took place the weekend before the British All Micro Show, and by all accounts it was a busy event, with sneak previews of Centek's Phénix TOS‑based machine being a particular highlight. It's not quite at prototype stage yet, but various of the bits that will make up the final machine were working on a Falcon testbed. The audio side of Phénix is said to be particularly well‑designed: the 20‑bit board will apparently be running on filtered power, to keep down the inevitable interference generated by the insides of a computer.