If your computer can’t handle running a separate track with its own real-time plug-in chain for every song on an album, a good compromise is to use two tracks with plug-in chains. When you’ve achieved settings that you’re happy with for the songs on both tracks, render the first one using Track Commit or AudioSuite plug-ins.

In the analogue days, mastering would involve setting up a chain of processors for each song, recording the processed version to the master format, logging settings, resetting the equipment and moving on. In the non-linear, non-destructive world of Pro Tools we can benefit from more flexibility, non-destructive processing and perfect recall, allowing us to easily make adjustments following the ‘cold light of day’ approval sessions.

Get Your Tracks In A Row

Mastering an album is as much about the order, flow and overall sound of the project as it is about the sound of each track, so as a starting point, it’s good to have each individual song bounced out as a stereo file. You can then load all of these files into a single Pro Tools session for mastering.

When you undertake these bounces, remove any limiting and other mastering type plug-ins on your master channel, and make sure that the bounced files have at least 6dB of headroom. If your tracking and mixing sessions are 24-bit, do your bounces at 24-bit too, and retain the original sample rate as well — you can set the final sample rate and bit depth as necessary when you come to export the master files. Also, make sure your bounced files have sections of silence at the beginning and end. If the track will eventually have a fade-out, consider creating this at the mastering stage rather than during the bounce; you may want to decide the length of the fade in context against the following track.

Once you have a folder containing bounced files for each track in your album, create a new Pro Tools session for the mastering stage, and some stereo tracks within it: six is a good starting point. Now import the bounced mix files into the mastering session, either by dragging the audio files into the Edit window or using the Import Audio option from the File menu.

As well as your master tracks, it is worth importing some additional material into your session, because it is very important to have a range of reference tracks for comparison. These may be tracks from the artist’s previous albums, or tracks from other artists that you would like this album to sound like. Either way, import these into the session and label them with appropriately so you know these are reference tracks and should not end up in the album!

Listening and rest are crucial when mastering, as is frequent use of the bypass switch. The ear can get accustomed to a sound quite quickly, so make sure you take breaks from working on tracks, keep going back to your chosen reference material, and get other opinions as well where possible. Leave three of your stereo tracks free of plug-ins to host this reference material, which will already have been mastered, and use the other three tracks to explore possible plug-in chains that will work for your own masters.

When you master in Pro Tools, one of the considerations is whether you can keep all the processing in real time, or whether you will need to render or freeze anything. From a flexibility perspective, the best solution is to have each album track on its own stereo track in Pro Tools, with its own real-time plug-ins running. This lets you keep your options open all the way to the end, but mastering plug-ins can be hungry on processor resources. If your computer doesn’t have the necessary oomph to do it this way then all is not lost. If you have the current version of Pro Tools, you can work round this by freezing tracks. However, if you have Pro Tools 12.2 or earlier, it’s still easy to set up a relatively efficient and flexible process.

Begin by working with real-time plug-ins on the first couple of tracks to create the desired sound, remembering to regularly check the changes against the original and your reference tracks. When you are happy with the sound of the first track, save the plug-in settings for each plug-in on that track: I recommend you use the track title and plug-in name in the preset name, so it is clear which settings go with which track. Save the settings to the Session folder rather than the Root Settings folder — if your Root Settings folder is anything like mine, it contains loads of settings, and finding the right one will be like a finding a needle in a haystack! Saving them in the Session folder means you’re choosing only from presets created for that project, and clicking on the ‘+’ button in the plug-in window will bring up the first setting saved in the Session folder, which can be very helpful.

Now, take the same approach with your second song on the second track, and save its plug-in settings.

Return to the first track. Select the audio, choose the AudioSuite version of the first plug-in, and apply the preset you saved in the real-time version. Do the same with the other plug-ins, in the same order as they are set up in your inserts. If you have Pro Tools 12.3 or above, you can use Track Commit to render all of the settings of all of the real-time plug-ins in one go, which is a lot simpler! Either way, once you have a rendered version of the first song, move its audio region onto a separate stereo track that contains no plug-ins; this could be called something like ‘Composite Track’, as it’s the track where the final album will be assembled. Finally, place a replacement copy of the unprocessed audio on the first track so that if later on you need to reprocess it you have an unprocessed version in the right place ready.

Moving on, you can now drag the audio for the third song from the Region List onto the first track, further down the timeline, and adjust the plug-ins til you are happy, remembering regularly to check your progress against the rendered version of the first song and the real-time processed version of the second song that is still active. Once you’re happy with the third song, Commit or render an AudioSuite version of the second, move the rendered audio onto the Composite Track, and move onto the fourth song. As you work through the album, in other words, you’ll always have the current track and the one before it available for you to adjust using real-time plug-ins, with the rest of the tracks available as rendered versions for comparison. 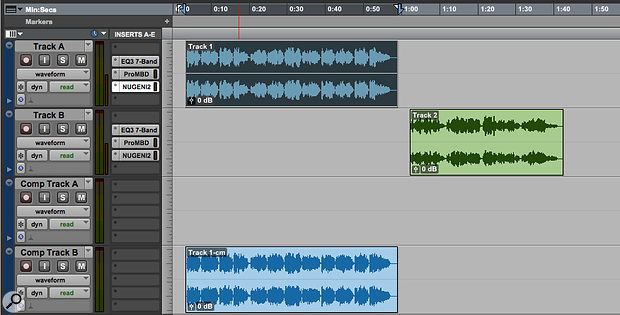 Once you’ve rendered a chain of mastering processes to a song, it can be dragged onto a separate track where the final running order can be assembled and gaps can be fine-tuned.

Should you need to revisit one of the rendered tracks, you can reconstruct it with the real-time plug-ins and the saved plug-in settings, make the changes, save new versions of the plug-in settings and render a new version. Providing you are methodical with your naming and saving, this method provides a reasonable degree of flexibility without using up too much processing load. A minor variation on this idea is that since your limiter will always be the last plug-in in the chain, you could keep that operating in real time, as you will only need to vary the Threshold control, and this is easy to automate.

An alternative approach is to keep everything real-time on both tracks and use snapshot automation to store and recall the plug-in settings for each song, making sure that the transitions between the different snapshots happen in the gaps between the songs. Remember, though, that snapshot automation is only available in Pro Tools HD. For a more detailed look at how it works, see the Pro Tools workshop article from SOS June 2003 issue at www.soundonsound.com/sos/Jun03/articles/pronotes0603.asp. Simon Price outlined some excellent tips for using snapshot automation that are still valid for Pro Tools 12, some 14 years later!

Next month, we’ll stick with the subject of mastering, looking at what sort of processing you might want to apply, and what tools are available to do the job.