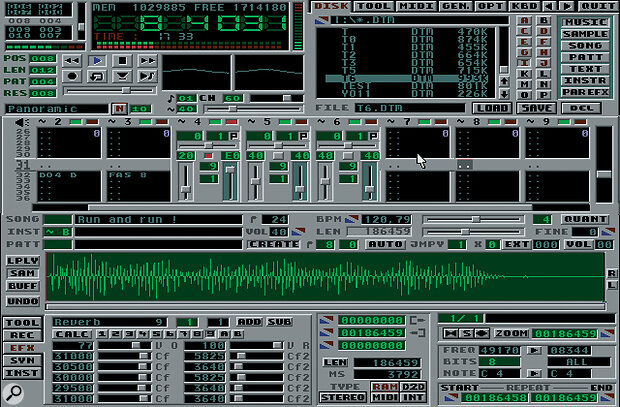 Homebrew software comes to the fore this month, as a Manchester studio decide to make the most of their vintage Atari — by producing their own programs. Derek Johnson gives them a big hand..

Even as a dedicated MIDI‑orientated Atari user, it comes as a pleasant surprise to me when I see that people are still supporting the platform with new software — and this month is a particularly good one. Manchester studio Perfect Music have produced a piece of software that solves two problems: what to do with their old Atari now that they're using Macs, and how to save the really large System Exclusive dumps produced by the latest synths. MIDI Filer arose from the frustration produced by the slowness of Mac and PC MIDI interfaces when it came to receiving SysEx dumps, not to mention frequent errors. The software will reliably receive and store to disk MIDI data from any MIDI source, including the newest breed of sound module which produce particularly large amounts of data.

The same team have also come up with something for Yamaha 02R owners. An Atari running Perfect's mapper software is patched between your main sequencer and the 02R, resulting in the ability to control the mixer entirely from the software. An attached MIDI keyboard can be used to mute and unmute channels, and MIDI controllers can be used to change EQ, pan pots, and so on. Encouraged by friends who found the software useful, Perfect have unleashed both packages on the world; they will run on any Atari ST with 1Mb of RAM or more, and cost just £12 each. Contact Perfect Music, PO Box 6, Cheadle, Cheshire SK9 3DX.

More new software is coming from France, home of an enthusiastic Atari underground and the occasional pretty big Atari show. First up is Parx Quincy, an 8‑track digital recording system for the Falcon. The software provides a comprehensive set of audio editing features, including copy and paste, import and export (AVR, AIFF, and AIFF‑C formats supported), sample analyse, volume parameters and fade‑in and fade‑out. An on‑screen mixer provides control over level, pan, two effects and EQ, and Quincy can load MIDI files, for playback simultaneously with the audio. Interestingly, it would appear that it will be possible to quantise audio with relation to MIDI events. Recording, via the on‑board hardware or a Line Audio Jam8 interface box, comes with punch‑in and punch‑out options, and can be non‑destructive.

Also from France is Softjee's Digital Home Studio, again for the Falcon. This software offers up to 12 audio and 32 MIDI tracks, and each audio track has level, pan and effect parameters. Audio can be recorded direct to disk, so RAM limitations won't always be a problem, and the software can be used pretty much as a sampler (an auto‑loop function is available), with on‑board effects (echo, reverb, flanger, equaliser and so on). Softjee claim that DHS is especially suited to remixers or people working in dance idioms.

Also from Softjee is Midplay, which turns your Falcon into a 24‑voice polyphonic MIDI File player — no external hardware required. Polyphony is dynamically assigned, most MIDI messages are recognised, there are solo and mute functions, and you have control over tempo and each track's volume. There's no UK distribution yet, so contact Softjee, F‑47200 Longueville, France. They can be emailed at softjee@hol.fr, and their web site is wwwperso.hol.fr/~softjee/ (I know that's a strange URL, but it is correct!).

Anyone in any doubt as to whether they should be hanging on to their Atari might like to take a look at the following list. All these pro musicians, who've been interviewed in SOS over the last year, still have and use Ataris in their studios.