We revisit the world of MIDI networking, inviting multiple devices, and even PCs, to the party.

Last month, we looked at the process of setting up an ad-hoc Wi-Fi network to create a wireless MIDI connection between a Mac and an iPad. It's a convenient way of sequencing an iPad synth from a Mac DAW.

Once you start getting into network MIDI, there's a bunch of other things you can do with it too: hooking up multiple Macs, connecting Macs and iPads with Windows PCs, and using iOS devices as DAW controllers, for example.

Getting two or more Macs 'MIDI'd up' wirelessly isn't much different from linking a Mac and an iPad:

That's your two Macs connected. Now you just need to configure your DAW and other software correctly, and since your network MIDI session should appear as if it were any other 16-channel MIDI device, that's hopefully the easy bit...

PCs running Windows (XP to 8) can join in the MIDI networking fun too: 'rtpMIDI' is pretty much a clone of OS X's network MIDI. The setup process works the same, and it plays nicely with OS X's and iOS's MIDI services. It's available from www.tobias-erichsen.de/software/rtpmidi.html. 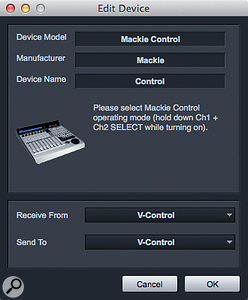 Neyrinck's 'helper' app for the V-Control DAW controller being configured for use with Studio One.Take an iOS app like SoundPrism Pro, for example ($9.99£6.99, App Store). It's great for generating chords and arpeggiated clusters that would be difficult on a conventional keyboard. Setting it up to play a soft synth on your DAW isn't too hard.

If you have MIDI interfaces for both your iPhone/iPad and your Mac, just run a MIDI cable between them. If you're opting for a network connection, though, make sure the Mac and iOS device are connected to the same network, then create a network MIDI session in Audio MIDI Setup on your Mac, and click to connect your iOS device to it, as we've explained before.

In SoundPrism Pro, go into Preferences/MIDI/Sources and Destinations and make sure Network Session 1 is switched on as a 'device' the app sends MIDI data to. Then tap the close button.

In your Mac DAW, launch your favourite soft synth, configure the track it's on to accept MIDI from your network session, record-enable it, and you should be away. 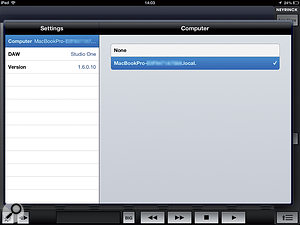 This same sort of connection process is what the bargain £2.99$4.99 AC7 Core HD DAW control surface for iOS relies on. However, some other iOS controllers use their own (usually free) 'helper' apps for Mac and Windows, and these do away with the need for configuration and network hassles. That's the case for the excellent V-Control (Free and Pro) by Neyrinck, which uses a helper called Ney-Fi. The screenshots show it being configured for use with Presonus Studio One, within the iOS app, and in Studio One itself. A similar situation pertains for the programmable iOS MIDI control surface TouchOSC (£2.99$4.99). Its helper, TouchOSC Bridge, which is downloadable from www.hexler.net, also takes the headache out of setting up.

There's no doubt that a dedicated 'ad-hoc' network, with no other network hardware in the equation, gives the best wireless MIDI networking reliability. However, you might find that you can achieve good results with all your participating devices connected to the same regular wireless Internet router. Try creating and connecting a network session in Audio MIDI Setup and keep your fingers crossed.

Of course, MIDI networking doesn't have to be wireless. If you've got two Macs wired to the same router with Ethernet cables, you'll often enjoy really reliable, low-latency MIDI communication alongside a normal Internet connection.