We look at how to use the facilities available to Cubase's MIDI tracks to recreate certain master keyboard functions.

While trawling around the SOS forum this month, I came across a post asking about how to recreate certain master keyboard functions in Cubase, such as a keyboard split that would separate the keyboard into two zones, each controlling a different VST Instrument. Setting up this kind of behaviour in Cubase is fairly easy, and there are actually two slightly different ways of tackling the problem; so in this month's Cubase Notes we will, quite literally, be looking at... 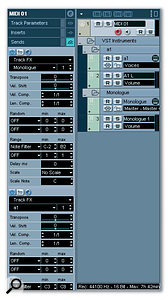 Here you can see a keyboard split created via the second method described in the main text, using one track and two sends. Notes received on this track between C-2 and B2 are sent to the Monologue VST Instrument, while notes between C3 and C8 are output to A1.

The first method of setting up this keyboard split is to create two MIDI tracks in the Project window and assign the output of the first track to the first VST Instrument and the output of the second track to the other VST Instrument. The default behaviour in Cubase is that MIDI Thru is active on only the selected track, which is set by the 'Enable Record on Selected Track' preference in the Editing — Project & Mixer page of the Preferences window. (MIDI Thru itself is set by enabling MIDI Thru Active in the MIDI Preferences page, for those who are interested.) However, it's possible to play both MIDI tracks simultaneously by either record-enabling or monitor-enabling both tracks, so that both of them receive incoming MIDI data.

At this point, when you play your MIDI keyboard both VST Instruments are layered on top of each other. The next step is to limit their ranges so that each MIDI track only plays certain notes:

As a side note, when you're setting the Min value it can't be higher than the currently set Max value. So if the Min value doesn't seem to be changing, you may need to adjust the Max value first.

You now have the same keyboard split, but using only one track, and since there are four sends available per track, you could even have a keyboard split with up to four zones.

Steinberg's original Studio Case bundle for Mac and Windows users proved to be one of the company's most successful products on its release in September 2003, combining a cut-down version of Cubase SX, known as Cubase SE, with 'junior' SE versions of popular virtual instruments such as Virtual Guitarist Electric Edition, Groove Agent, The Grand, D'cota and Halion for just $300. Now Steinberg have introduced the Studio Case 2 bundle, which picks up where the previous bundle left off, featuring Cubase SE 3, a cut-down version of Cubase SX 3, which shares the same VST 2.3 mix engine used in other Cubase products, and adds a new SE version of the recently released Virtual Bassist.