The rescue mission this month is to bring coherence and polish to the disparate elements of Solivern's interesting instrumental composition...

The drum kit sounds were controlled and sweetened using a combination of the Universal Audio Fairchild compressor plug-in and Logic's Space Designer convolution reverb, with a little low-end cut on the reverb to keep things clean.Solivern is the name Juan Mico uses when he's making music. The track he sent us to remix was an interesting instrumental composition that started off somewhat 'New Agey' but soon progressed, via heavy rock, to jazz, with some unusual time-signature shifts. On the whole, it had a TV theme kind of feel, albeit with perhaps too much variety for any single genre of show. Although the mix Juan sent us was clean and well-balanced, I felt that its various elements weren't gelling as well as they might, and thought that an isolated organ part in the middle of the song felt rather too stark and obvious.

Juan's track was initially recorded using Apple's Logic Pro DAW software, so it was easy to load it into my system, which I'd just updated to Logic 8. I didn't have all the same plug-ins that Juan had used during his original mix, so I had to substitute some of my own.

The track's multiple guitar parts were DI'd clean and then processed using NI's Guitar Rig 2 or IK Multimedia's Amplitube or Ampeg SVX. As I'd just upgraded my version of Guitar Rig to Guitar Rig 3 and had deleted Guitar Rig 2 from my system, the tracks that needed Guitar Rig 2 simply came up showing "plug-in not available". As an experiment, I decided to use the Line 6 Gearbox plug-in to recreate Juan's heavier guitar sounds, which worked out well, as I'll explain later.

The drum part was originally created using NI's Battery, but as the tune obviously needed a really nice acoustic kit sound, I thought I'd try the latest EZ Drummer Nashville expansion kit, which turned out to work really well alongside Juan's very confident-sounding bass-guitar part, although some remapping of notes was required. I also took the liberty of adding a couple of cymbal crashes where I thought a drummer would be likely to play them, and I inserted a couple of tom hits at the end of one section, but otherwise I changed very little in the drum part. The entire kit was fed through UA's Fairchild compressor plug-in, then Logic's Space Designer plug-in with the Green Chamber impulse response (IR)loaded up, which gave the kit a nice ambient feel without making it 'washy'. This particular IR features fairly strong, bright early reflections, which is probably why it works so well, even on the kick drum. I rolled off some low end below 200Hz, to keep the reverb sounding clean, but otherwise used it just as it came.

Over the centre section of the song I added a few bars of a Stylus RMX percussion loop (Mojave), using its Chaos feature to add a little natural randomisation and to reverse the occasional beat. This sounded quite atmospheric and led nicely to the next section, which featured a clean, phased guitar with heavy compression and delay over the organ part. The latter I revised to improve its feel; you can read about how I did that in a moment.

Juan had DI'd his bass guitar part and then used the Ampeg SVX bass-guitar plug-in to process it. As I have the same plug-in here in my own studio, I listened to what he'd come up with and it actually sounded very natural, with plenty of depth and definition. Aside from some minor EQ tweaks, I used the bass part much as Juan had set it up. He'd used the Logic compressor and also some low cut at around 35Hz, which is always wise, as frequencies that low simply eat up headroom and place stress on speakers, without really being audible over most systems.

Hear The Mix For Yourself!

We've put audio files on the SOS web site of the Solivern original mix done by Juan, Paul White's remix, and some before and after files of individal instrument parts. Just go to www.soundonsound.com/sos/dec07/articles/mixrescueaudio.htm. 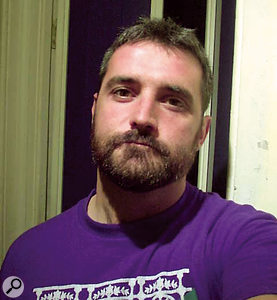 The intro of the song featured two quite sparse piano parts on different tracks and as I didn't have the same sample set that Juan had used, I loaded Eastwest's Ultimate Piano Collection Fazioli and Steinway piano samples into two EXS24 sample players, then added some dreamy reverb courtesy of Logic's Space Designer, running the Natural Reflections Short IR.

An FM synth line was also replaced with an FM bell-pad type of patch from my Korg Wavestation plug-in, which I doubled up with an EXS24 sampler playing a pad sound I'd sampled from my Oberheim Matrix 1000 synth before I sold it. Because the sounds don't hog the audio spectrum, they didn't get in the way of the piano. The two synth parts were panned left and right, to produce a more interesting soundscape. I then used the same Oberheim patch to double up the 'Crab Nebula' patch Juan had used from his Camel Audio CA5000 synth plug-in over the piano intro of the track.

I cheated a little with the organ line by using Logic's Force Legato command to extend the MIDI notes, then substituted the Garage Band Digital Stepper instrument, which creates a less dense, FM-flavoured sound with an element of movement to it. Some of the extended notes sounded a bit discordant in context, so I massaged these to fit. The guitar is the main focus of this section, so the keyboard part was balanced to be supportive rather than obvious.

Juan Mico, aka Solivern, sent us his instrumental track for remixing, commenting that: "I'm not happy with the original mix of my track because the different parts sound a little 'jumpy'." The track is intended to be "a 'chapter' of a much longer multi-atmospheric piece", and Juan is hoping to improve its 'flow', as well as picking up some EQ and compression tips if possible.

The doubled heavy guitar parts were treated with Gearbox to give the impression that they had been played through two different amp stacks.The heavy guitar part (DI'd clean, for processing via a plug-in) came as a pair of tracks which held the same part played twice, to create a double-tracking effect. I decided to treat these with different heavy amp settings using the Line 6 Gearbox plug-in, so that when they were panned left and right the impression would be of two different amp stacks playing at the same time. One channel was treated to a heavy Boogie-like sound, while I tried to make the other sound more like a modern Marshall stack driven hard. A tempo-locked, tape-style delay gave these sections a convincing stadium-rock sound that contrasted well with the more gentle sections either side, and both parts were grouped and fed to a bus with a compressor inserted, to keep the density up.

Juan had used a nice ethereal sound effect from his CA5000 software synth to introduce the first heavy guitar section, and I used a shortened version of this at a lower level to run into the break following the middle 'organ' and clean guitar section, and leading into a few bars of solo piano. I found that this worked really well, providing a natural tail-out for the section, again without getting in the way or drawing too much attention to itself.

Juan had also recorded some clean guitar parts that had been processed using Amplitube, to create a 'phaser pedal through a clean amp' sound. These were also already compressed, so I left the parts pretty much as they were, with just some minor adjustments and a gentle application of reverb. 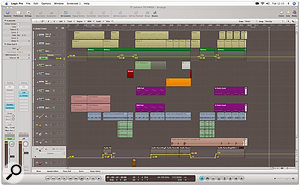 Juan's arrangement was far from overloaded, as the Logic Arrange page shows, and was all the better for it. Note the subtle use of level automation (the yellow lines) in the remix, to balance instrumental parts across different sections.I used subtle panning to separate any guitar parts or pads that were playing at the same time, but nothing too dramatic. As is very often the case, some level automation was needed to keep the parts in balance during the various sections, but again this was simply a matter of a couple of dB in either direction. I don't normally automate drum levels but, because of the wide dynamic range of this track, I found that a little level riding helped, otherwise the drums would have been too loud during the intro and lost during the heavy-rock guitar sections.

The end of the song seemed to fizzle out rather than finishing decisively (perhaps a fade-out had been planned?), so I chopped off the last few beats and added a cymbal splash on the final beat. I was expecting this to sound like a bit of a compromise — but it actually sounded really tight, so I decided to leave it at that.

The final mix sounded very sweet without any additional mastering tricks, so I simply added some gentle, low-ratio compression, using my Drawmer 2476 Masterflow, and followed this up with a Waves L1 limiter to maintain as much average level as possible, but without damaging the audio quality by over-limiting. Even on the loud 'heavy metal' sections the limiter was only skimming two or three dB off the peaks.

In the end this proved to be a relatively easy project to mix, because Juan's parts were all well recorded and, equally importantly, his thoughtful arrangement had left plenty of space. The finished piece sounds big and impressive, but as the Logic Arrange window shows, in this case less definitely is more. Even though I substituted synth, drum and piano sounds, the finished work still follows the spirit of Juan's original, but hopefully with a little more polish and coherence.

Juan comments: "The track now makes more sense and flows much more seamlessly as a whole. Bearing in mind that I compose almost exclusively building up from some improvised line, I think that's quite an achievement. Paul is right —the track was intended to end with a fade-out, because it's going to be part of a longer, multi-atmosphere piece. Maybe that also explains the 'TV theme' feel.

"I had problems in general dealing with EQ, and some doubts regarding what to do about compression. I tend to neglect the high end of the spectrum and put too much weight on the low end, but it all sounds more compact now.

"The one bit of the remix I don't like, which Paul already knows about, is the drums. I think my original tracks, which used a Battery acoustic kit, sounded more natural. They needed more efficient processing, and I'd been hoping for tips on how to improve the sounds, rather than changing them all.

"Even so, I think Paul has done a great job of looking at my song, seeing its direction and raison d'être and coming up with the right techniques to get it there."