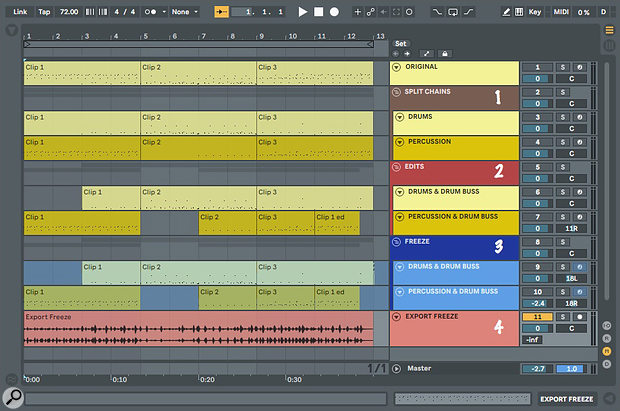 Screen 1: The four steps to split a drum part into two kits, apply separate effects and export an audio stem for the final mix.

We show you some tips to streamline your mixing in Live.

This month we'll have a look at how to accomplish common mixing tasks in Ableton Live. I'll leave the whens and whys of mixing and mastering to others, but you'll find helpful tips in most issues of SOS, and a good starting point is Hugh Robjohns' 2002 article, Practical Mixing. For more on mastering in Live, check out the February 2015 Live column, 'The Final Act'.

Let's start by cleaning up your Live Set. It's never too early to get rid of the junk, and that's a good way to clear your mind when you're stuck. Delete any unused tracks for which you have no plans, including Return tracks. To save CPU, consider removing or at least deactivating any devices on unused tracks that you do keep. (Muting a track does not deactivate its devices.) Move all remaining unused tracks to the end of the Track list, combine them in a Track Group (Command+G/Control+G) and then fold and mute the Group.

If you are at the final stage of the project and will not be using Session view clips, it's also a good idea to delete all of them along with any clip slot Stop buttons. This will save you from accidentally deactivating an Arrangement view track with an errant key command or button press. It will also save time when Freezing tracks because Freezing automatically applies to both Session and Arrangement view clips (for details see the 'Bouncing & Stems' box).

A good way to organise the remaining tracks is to assign the same or similar colours to similar tracks: percussion, keys, pads, vocals and so on. In some cases you may want to go a step further and collect similar tracks into a Track Group. This is Live's easiest way to create a submix (the alternative is to route the outputs of multiple tracks to a new audio track). Groups also make it easier to solo or mute all tracks within the Group, as well as to visually tidy up large Sets by folding Groups.

With a track that holds a large Drum Rack, you may want to first split that into separate Drum Racks on their own tracks — drums, percussion and effects, for example. To do that, unfold the Drum Rack track in Session view, select the chains you want to keep together and then choose Extract Chains from Live's Create menu or from any selected chain's context menu. Extracting the chains will also extract MIDI data routed to those chains from any clips on the track. You can now edit the clips individually, apply different effects to each Drum Rack and mix them separately.

The example in Screen 1 above starts with a 16-pad Drum Rack and three MIDI clips. Here are the steps to split the Drum Rack to two tracks, add different Drum Buss processing to each, edit their clips and export an audio stem for the final mix.

1. Unfold the Drum Rack, select the chains you want to extract — congas, cowbells and timbale in this case — and extract them. You'll now have two tracks with a Drum Rack and MIDI clips on each. Enclose the tracks in a Group to create a separate mix bus for the drums.

2. Edit the MIDI clips on the two tracks as needed. This is both easier and more flexible then editing a single clip for all 16 kit pieces. Add Live's Drum Buss effect to each of the Drum Rack tracks and audition different settings or presets.

3. Freeze each of the tracks in the Group. This saves CPU by disabling the Drum Racks and Drum Buss effects while still letting you edit each track's mixer settings.

4. Create a stem for the final mix by Exporting the Frozen Group (Command+Shift+R /Control+Shift+R). 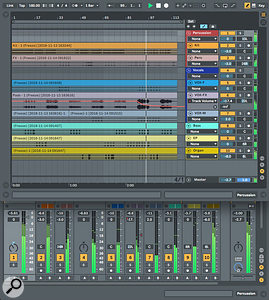 Screen 2: Each of the tracks of a finished song has been converted to an audio clip spanning the full length of the song. You can edit the resulting tracks and Groups before mastering and rendering the song.The example in Screen 2 starts with an eight-track MIDI arrangement, creates audio stems for each of the song's tracks and encloses the percussion stems and the vocal stems in their own submix Groups.

Start by Freezing, Flattening and Consolidating each of the Set's tracks. You can Consolidate one track at a time or, once they are all Flattened, simply select all tracks for the full range of the song and Consolidate everything at once. (Consolidating doesn't affect Groups; only the tracks they hold will be Consolidated.) If you have any audio effects that you may want to edit after Freezing, move them to a track that you don't plan to Freeze (such as one of the Group tracks) and then move them back to their original tracks after Flattening. Mixer automation is not captured when creating stems in this way, leaving you free to edit your mix. When you want to create stems from your submix Groups as opposed to their individual tracks, export the Group as in the previous example.

One last tip: if you prefer to use Live's Session view mixer when working on your arrangement, open a second window for the Set (Command+Shift+W/Control+Shift+W). One window will show Arrangement view, and the other Session view with its mixer. This is most convenient with two monitors, but it is still workable by overlapping the views on a single monitor as in Screen 2.

Check out the SOS Tutorials video on Ableton Live 10.

Live offers several options for converting one or more tracks to a single audio clip. Reasons to do this include saving CPU; allowing audio manipulations such as reversing, slicing and time-stretching; cleaning up your arrangement; and sharing your work with collaborators. When mixing, it simplifies the process by eliminating instrument and effects plug-ins. It also lets you go back to the mix when some of those plug-ins are no longer available. Having said that, it is a good idea to save a track or Track Group as its own Live Set before you bounce it to a stem. You can do that either by dragging individual tracks or Track Groups into the Current Project folder in Live's Browser or by keeping a pre-bounce copy of the whole Set. I find it easiest to keep a folder for pre-bounced tracks and Groups rather than trying to remember which Set they came from. 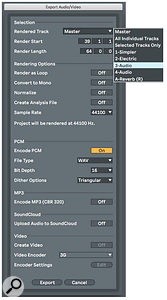 Screen 3: Live's Export Audio/Video dialogue lets you render all or selected tracks in your Set in a variety of audio and video formats, with some basic audio processing options.One way to bounce a single track is with Live's Freeze function. This saves CPU, and you can un‑Freeze the track at any time to return to it to its original state (MIDI or audio). Freezing creates a time-stamped 32-bit audio file in your Set's 'Samples/Processed/Freeze' folder that you can import into any Live Set. You can Flatten a Frozen track to transform it to a standard audio track in your Set, or you can copy the contents of a Frozen track to another audio track — either option actually imports the aforementioned 32-bit Freeze file. Keep in mind that Flattening eliminates the possibility of un-Freezing unless you undo your way back step-by-step to the un-Frozen track. Although there is a single Freeze file, if the original range included separate clips, importing or Flattening the Freeze file will preserve those clip boundaries.

Live's Consolidate function is a handy way to combine multiple audio clips on the same track. Consolidating creates a single audio file in the format specified in your 'Record/Warp/Launch' preferences and places it in your Set's 'Samples/Processed/Consolidated' folder. Consolidation renders audio clip fades and crossfades. However, Consolidation does not capture processing by audio effects on a track, and Consolidating MIDI files on instrument tracks simply combines the MIDI files.

That brings us to Live's Export function (File menu or Command+Shift+R /Control+Shift+R), which is Live's most versatile way to capture audio. You're undoubtedly familiar with Export from rendering your Live Sets, but the Rendered Track menu at the top of the Export dialogue lets you also export individual tracks or all the tracks that are selected in your Set or all tracks in your Set. You're also presented with a variety of export options. When you want to create stems from multiple tracks for mixing in a new Live Set, Export is usually the fastest way to get the job done. And, Exporting captures all mixer automation and effects processing.