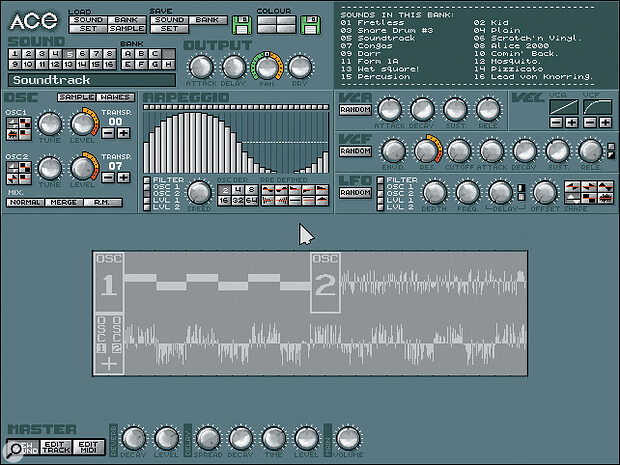 This screen of an interim version of New Beat's Ace Falcon software synth looks impressive enough, though the final version may look a little different.

A Swedish soft synth is on the way, a New Zealand developer plans to introduce the Atari to the wonders of Ethernet, and US company Dr T's finest hour becomes shareware. Derek Johnson goes global.

Another new year, and there's no sign yet that the Atari is being abandoned as a platform for music creation, with a steady stream of new and newly available software to inspire new ways of making music. And that's good news for this column and Atari users everywhere.

We start off 2001 (well, the middle of December, 2000!) with news of something that's not quite ready, but should soon be. Mac and PC users have plenty of choice when it comes to software synthesizers, and to be honest, a number have been written for the sundry variants of Atari, but it's still good to hear of another one: Ace, a 16‑bit, Falcon‑only soft synth from Swedish coders New Beat. Though it's still very much in development, the specifications already look good: up to 128 sounds in memory; 11 to 24 voices, depending on hardware; dynamic voice allocation; resonant low‑pass filter with ADSR envelope generator; DCA with ADSR; assignable LFO; 32‑step user‑programmable arpeggiator; reverb and delay effects. An Ace oscillator is able to use samples as a basis for synthesis, or standard synth waveforms such as sawtooth or square waves. Ace is a two‑oscillator synth when using standard waveforms, or single oscillator when samples are employed.

New Beat report that they're working on a 'tracker'‑style interface, for those who'd rather not use MIDI, and plan to add 16‑part multitimbrality, with 128 sample split points per MIDI channel, and support for the Line Audio Jam audio output interfaces. Visit New Beat's web site (newbeat.atari.org) to keep up with developments; a demo song using Ace should be up there soon. Ace will be distributed as shareware, though registration fees have yet to be finalised.

New Beat are also responsible for FlexTrax, an 8‑channel 'tracker' program with built‑in sample editor. The software is once again Falcon‑only, and it uses a replay routine that was originally developed for New Beat's platform game Willie's Adventures. FlexTrax supports the standard MOD file format, but also uses its own extended file format, which supports real‑time effects such as reverb and delay. The latest version also offers support for AVR and WAV sample formats.

Intrepid New Zealand developer Mario Becroft has a couple of Atari hardware projects under way. He's working on a SCSI‑to‑10 megabit Ethernet adaptor which should bring the benefits of cross‑platform networking to Atari users. Your Atari will obviously need SCSI interfacing (which can be added by a DMA‑to‑SCSI box) to take advantage. Drivers for the MiNTnet and STiNG alternative operating systems are in development, and documentation will be made available to those who want to create their own drivers.

Mario also has a VMEbus graphics card in the works, which will be suitable for TT and Mega STE computers (or other systems using an A24:D16 VMEbus interface). The card should support resolutions up to 1280x1024 (non‑interlaced) or 1600x1200 (interlaced) in 16‑bit colour mode, and hardware acceleration will result in high speed operation even at high resolutions.

Regular readers will know of Mario's devices — including the recent MIDI3 expander — and it's worth reminding you of his IDE interface (which includes a TOS 2.06 upgrade). This is available for Atari STFM, STE and Mega ST, and allows up to two standard IDE hard disks or CD‑ROM drives to be connected to the computer — bringing access to cheap and readily available PC peripherals to Atari users. Connectors are provided for both 2.5‑inch and 3.5‑inch drives, and if you have an ST or STE in its original case, a 2.5‑inch should fit inside. For further information about supply, pricing, fitting and drivers, contact Mario's UK distributor, ASP.

The Doctor Is In: KCS Goes Shareware

Thanks, again, to the efforts of Tim Conrardy, even more classic commercial Atari software is available for free download, either from his site or from the files section of the Atari‑Midi Mailing List (see links below). The most interesting news this month is that Dr T's KCS Omega v4 is now amongst that collection as shareware — the cost is a minuscule US$30 (around 20 quid). It's also possible to upgrade to the even more sophisticated v5.0 (direct from Dr T himself); details are available on the web sites or in the docs included with v4.0.

This remarkable piece of software offers a similar level of sequencing power to Steinberg's Cubase and C‑Lab's Creator/Notator family, but with MIDI manipulation extras that bring in an algorithmic composition feel. It even offers a multitasking system, dubbed Multi Program Environment (MPE) which allows compatible sequencing, scoring or patch‑editing programs to be run alongside KCS Omega, and share data with the package. This version of the software even comes complete with an MPE version of QuickScore scoring software and Tiger ("The Interactive Graphic EditoR"), a piano‑roll editor for graphically viewing, editing and playing MIDI sequences.

It's always going to be tricky to summarise a piece of software as part of a single‑page column, especially one with this program's depth... so I won't: the news of KCS Omega's availability came just as I was preparing this month's column, so I'm going to go away and play with it for a bit, and report back in a month or two. Meanwhile, you can be trying it out, too!