As weeks go, the first couple in January were pretty good for new Mac hardware, with Apple introducing updated Mac Pros and Xserves, along with a new stunningly thin MacBook. We dissect the potential of Apple's new offerings with a musician-shaped scalpel.

January is often a good month for Mac users, with the annual MacWorld show taking place in San Francisco, and this January was no exception. As anticipated, the highlight of Steve Jobs' opening keynote was the introduction of the MacBook Air, which, with a height of between 0.16 and 0.76 inches (0.4 and 1.94cm), is being touted by Apple as "the world's thinnest notebook."

In addition to being incredibly thin, the MacBook Air is also the first Mac portable to feature innovations such as enhanced, iPhone-like multi-touch gestures on the built-in trackpad, and the option of using a solid-state drive instead of a hard disk. However, in order to create such ultra-mobile form-factors, manufacturers usually have to compromise on performance. And since performance is usually one of the most critical factors musicians and audio engineers take into account when purchasing a Mac, how suitable will this new MacBook be for demanding applications?

Compared to the processors other laptop manufacturers have chosen for similar products, the MacBook Air's processing abilities are quite impressive, featuring a choice of either a 1.6 or 1.8 GHz Core 2 Duo processor from Intel, which offers a 4MB Level-2 cache and runs on an 800MHz system bus, just like the regular MacBook or MacBook Pro. This chip was apparently custom-built for the MacBook Air, and Intel CEO Paul Otellini made another MacWorld appearance to present one of these processors, which, judging by the size of Jobs' thumb and forefinger, is a remarkable exercise in miniaturisation. 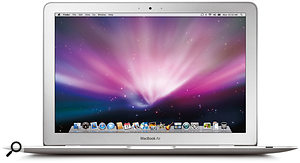 The MacBook Air exudes Apple's design elegance and has some incredible features for a computer that's almost impossibly thin. Unfortunately, with its lack of connectivity and limited storage option, along with the fact that you're reading Sound On Sound, this may not be the laptop for you.

As mentioned before, the Air's trackpad implements support for additional multi-touch gestures, allowing you to perform actions with multiple fingers to carry out certain operations. For example, where previous MacBooks (and PowerBooks) allowed two-finger scrolling, the Air's trackpad also allows you to use gestures such as pinching and expanding two fingers to zoom in and out, and swiping three fingers across the trackpad to either move backwards or forwards.

Although applications like iPhoto already support these gestures, because I haven't been able to get my hands on a MacBook Air at the time of writing I wasn't able to see if an application needs to implement support directly for these new gestures, or if such operations are provided 'for free' by the operating system.

In addition to the thinness, the Air name also refers to the networking abilities of the notebook, which features the same Airport Extreme 802.11n wireless networking as the MacBook and MacBook Pro, plus upgraded Bluetooth 2.1+EDR (Enhanced Data Rate) support.

While the MacBook Air undoubtedly has some great features, making a laptop as thin and as light as this — it weighs just three pounds (1.36kg) — inevitably involves some compromises. To begin with, although the MacBook Air ships with 2GB of 667MHz DDR2 memory, it's actually hardwired to the motherboard and there are no slots for adding additional memory. This won't be a big deal if you intend to use your MacBook Air for general computing tasks, but it's certainly less than ideal if you like to run a large number of software instruments.

Moving on to storage, the MacBook Air is the first Mac portable in a number of years (since the Duo, if I remember correctly) that doesn't feature some kind of removable media, such as an optical drive. For me, this is perhaps the least significant limitation of the Air, since I rarely use the optical drive on my MacBook Pro, as it's usually connected to some kind of network. This is clearly the type of working practice Apple hope will appeal to MacBook Air users, although when it comes to watching DVDs, Apple also clearly hope that MacBook Air users will want to instead purchase or rent movies from the iTunes store.

To compensate for the lack of a built-in optical drive, Apple do offer an optional external Superdrive for £65, and the MacBook Air also ships with Apple's new Remote Disc software for either Mac OS X or Windows, which allows you to easily use the optical drive of another computer as if it was attached to your MacBook Air. While you can use Remote Disc to easily install software, there's no mention of whether disc burning is also supported. However, for backing up your files, Jobs also announced a new product called Time Capsule, which is basically an Airport Extreme base station with either a built-in 500GB or 1TB hard drive for £199 or £329 respectively. It works with Leopard's Time Machine feature, allowing you to wirelessly back up your files.

Perhaps the biggest potential performance bottleneck, though, is the 1.8-inch 4200rpm 80GB parallel ATA drive supplied with the basic MacBook Air model, which includes a 1.6GHz Core 2 Duo processor and retails for £1199. Having owned a laptop with such a drive in the past, I know that it really can slow a computer down, especially where virtual memory is concerned, and while it's not really fair to judge the MacBook Air on this, since I haven't seen an Air yet, I would find it hard to imagine this drive being suitable for any kind of audio work.

On the plus side, as mentioned earlier, one of the new features of the MacBook Air is the optional 64GB solid-state drive, which comes as standard with the higher-end model that has the 1.8GHz processor and costs £2028, or adds an additional £639 to the cost of the basic model. While this is expensive, the performance increase should be significant, and such a drive should also have a positive impact on the Air's quoted five-hour battery life, as well as being more durable, with no moving parts.

Musicians and audio engineers who order a MacBook Air with the solid-state drive will probably be frustrated by the laptop's physical connectivity. Unlike Apple's other MacBooks, which offer an extensive range of inputs and outputs, the MacBook Air has just one USB 2.0 port, one headphone output, and a video output port that supports either DVI or VGA (using the included adaptors), or composite or S-Video (using separately available adaptors).

In many ways, the MacBook Air is something of an unexpected product for Apple. Although there has certainly been a gap in the company's portable line-up since the demise of the 12-inch PowerBook, that gap was arguably for a laptop with the performance of a MacBook Pro but with a smaller form factor. The MacBook Air has a stunningly small form factor, but is less powerful than a MacBook, while costing almost as much as a MacBook Pro, and possibly more if you opt for the solid-state drive.

The MacBook Air clearly caters for an elite clientele but one which is not demanding in terms of performance, and with its technical excellence and aesthetic desirability it seems curiously reminiscent of the PowerMac G4 Cube — a brilliant and beautiful product that was also expensive and limited for the type of users who would normally afford such a Mac.

In terms of power, the MacBook Air's processor, combined with the solid-state drive, should provide reasonable performance, but, as with the MacBook, shared memory for the graphics processor is not ideal for demanding applications that make intensive use of OS X graphics frameworks. And, perhaps more importantly, the fact that there's only one USB port means that your choice of audio and MIDI hardware is limited, especially if you need to connect via a hub to accommodate a USB-based copy-protection device.

It's a real shame that Apple weren't able to fit a Firewire port, since this would obviously have made a big difference to those connecting audio or video hardware, as well as external hard drives. And if not for musicians and audio engineers, what about all those highly-paid executives who might want to connect their equally expensive video camera to edit their family movies in iMovie?

Hopefully I'll get the chance to test out a MacBook Air soon, but my initial impression is that, from the music and audio perspective, you'd be wiser to spend the money on a MacBook Pro, unless you really, really need something incredibly thin, and really, really, don't need the ultimate performance or connectivity. 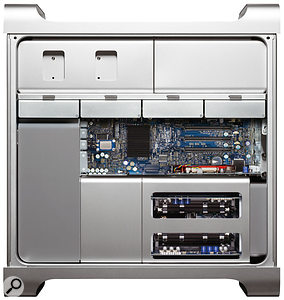 Apple's new Mac Pro incorporates Intel's latest 5400-series quad-core Xeons and now offers internal SAS drives. If you want the ultimate in performance, this could well be the Mac you've been waiting for.Photo: Apple Although not featured in Jobs' MacWorld keynote presentation, Apple unveiled an update to their line-up of Mac Pros, which now feature Intel's latest 5400-series 'Harpertown' Xeon processors, and officially support SAS (Serial Attached SCSI) drives, which can be purchased as build-to-order options along with the required RAID card. These features were discussed in last month's Apple Notes column, along with performance benchmarks for running audio tracks on SAS drives via an Xserve (www.soundonsound.com/sos/feb08/articles/applenotes_0208.htm).

With the revision, the base price for a Mac Pro has now increased slightly, to £1749, and this 2.8GHz model now features eight cores (using dual quad-core Xeon processors) as standard, although a single-processor 2.8GHz four-core model is also available for £320 less. If you want the ultimate performance, you can opt for either 3.0 or 3.2GHz Xeon processors as well, although this adds £500 or £1000, respectively, to the price.

Each processor offers 12MB of Level-2 cache, and the Mac Pro now has a 1600MHz system buss, along with the ability to accommodate up to 32GB of 800MHz DDR2 ECC fully buffered memory. For graphics, the base Mac Pro features an ATI Radeon HD 2600 XT graphics card with 256MB memory and support for two dual-link DVI connections, and you can also order your Mac Pro with multiple ATI cards, or either an Nvidia GeForce 8800 GT with 512MB memory or an Nvidia Quadro FX 5600 with a staggering 1.5GB of memory.

While the base model comes with a single 320GB 7200rpm SATA drive, you can also order 500GB, 750GB or 1TB SATA drives as well; and for the ultimate in storage performance you can now order 300GB 15,000rpm SAS drives, which also require the optional RAID card. The Mac Pro accommodates up to four drives, as before, although they have to be either all SATA drives or all SAS drives, so you can't mix and match types.

We'll look more closely at the new Mac Pro in a future Apple Notes, but this looks like a highly desirable Mac for those who demand the ultimate in performance. The only thing to bear in mind right now is that the new Mac Pros are currently unsupported by Digidesign, partly because they ship with Leopard, with which Pro Tools is currently incompatible, pre-installed.