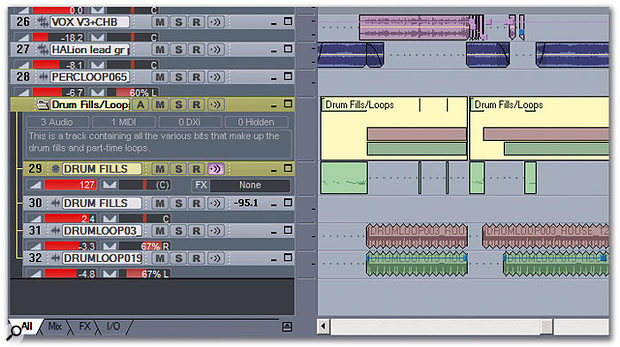 Track Folders are a great way to organise tracks, but can also be useful because editing performed on the Track Folder can affect all the tracks within the Folder. This is a real time-saver for slip-editing, creating send controls for all tracks in the Folder, and so on.

Organise your tracks with Sonar 4 's Track Folder feature, nudge them into place with sample accuracy, and reclaim older plug-ins for use in newer versions of Sonar.

Sonar 4 is out, and as SOS will be reviewing it in a future issue I thought we'd jump right into applications. If you want the spec on what's new, a quick trip to www.cakewalk.com will fill you in. I will venture one opinion: It's well worth the upgrade cost — this is definitely not dribbleware, but a significantly different version, compared to Sonar 3, that offers both major and minor enhancements.

Sonar was late coming to the 'folder track' party, but the implementation in Version 4 has made up for lost time. You create a Track Folder as you would any other track — from the Insert menu, or by right-clicking on an empty space in the track view and selecting 'Insert Track Folder'. Once the Track Folder appears, you can stuff it with whatever tracks you want (MIDI, DXi, Audio, even 'frozen' tracks) by clicking on a track's icon and dragging it into the Track Folder. However, note that you cannot drag a Track Folder into another Track Folder.

Clicking on the Track Folder's folder icon shows and hides the contents, although most of the time you'll probably leave it closed, as you can still see strips representing the various tracks inside the folder without the folder's contents being properly shown. You won't see actual waveforms or MIDI notes, but the strip colours will be the same as the tracks they represent.

As a Track Folder obviously won't have the same controls as a normal individual track (although you can mute it, solo it, record into a Track Folder, and archive it), expanding the space below the track header lets you write notes on what's in the track. There's also an indicator that shows how many Audio, MIDI, DXi and hidden tracks are within the Folder.

My favourite use for Track Folders (at least, so far) is with MIDI-triggered drums. I like to place each drum sound on its own track, which simplifies editing. However, if I need to move these or edit them as a group, it's far easier if they live within a Track Folder (of course, it's still possible to edit them as individual tracks if desired). I also put the virtual drum synth that's being driven by the MIDI tracks in the Folder. This has a beneficial effect on the workspace — replacing a dozen or so tracks with a single track labelled 'Drums' is a lot tidier. Track Folders are also great for layered rhythm guitar tracks, harmony tracks, and so on.

I Want My Old Plug-ins Back! 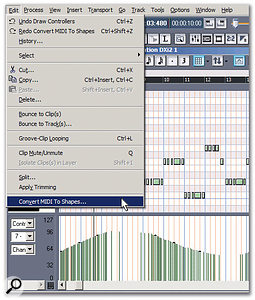 The selected controller will be converted into a standard envelope if you 'Convert MIDI to Shapes'. Note that this removes the controller data from the Piano Roll window.If you're one of the Sonar faithful, you may have liked some of the plug-ins that came with earlier versions, but are no longer included with the Sonar 4 package. In particular, there are quite a few fans of the CompressorX and EQ plug-ins from Sonic Timeworks that came with Sonar 2 XL. Sure, the Sonitus compressor and EQ are great, but the Sonic Timeworks ones are sufficiently different that they're handy to have around as well.

You don't have to lose out on these when you install your new version of Sonar. And despite some misinformation I've seen, you don't have to do any foolishness like installing Sonar 2 first, then installing Sonar 4 over it. (Your computer probably wouldn't let you install Sonar 2 anyway if you have DirectX 9 installed. The installer will look for DirectX 8.1, not find it, and complain. And if you try to install DirectX 8.1, Windows won't let it overwrite DirectX 9.) Fortunately, Cakewalk have provided a solution that allows you to retain the older plug-ins. Simply pay a visit to http://www.cakewalk.com/Support/DX9.ASP, download the file DirectXUtility.exe and save it to your desktop. Insert the Sonar 2 XL CD into your drive, and then you can double-click on DirectXUtility.exe. This allows Sonar 2 's installation routine to start. Go through the installation process as you normally would, until you hit the Select Components screen. Untick all the boxes except Audio FX. Then click on the Audio FX options button, and untick everything except 'Sonic Timeworks CompressorX & EQ.' Click on OK. Continue with the installation procedure, which will install only the items you checked — the Sonic Timeworks CompressorX and EQ. When the 'Installation Complete' screen appears, untick all three boxes, then click on 'Finish'. Open Sonar 4, and lo and behold, the plug-ins will be available for your processing pleasure.

Sonar 4 has added a nudge feature, where you can select an audio or MIDI clip (or Ctrl-click to select multiple clips) and 'nudge' by a specified amount. This may not seem too terribly useful, as there are plenty of ways to move clips around. But once you start using it, nudge becomes addictive. 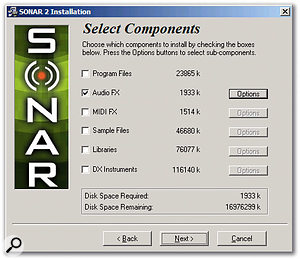 You can determine what is and is not installed with the Select Components screen and the Options buttons.My main application is using nudge to add 'feel factor'-type offsets to parts (ie. leading or lagging drums in relation to other drums). Setting up a 16th-note nudge is useful when experimenting with percussion parts, as changing a clip's 'offset' can give an entirely different feel.

Nudge is also essential for trimming out delays. If you're running a track through an outboard hardware processor then bringing it back into Sonar, you'll probably hear some delay caused by the track going outside the system. The trick for trimming delays is to copy the track being processed, flip the phase on the copy, then monitor this track while you nudge the version of the track that's being processed. For this application, you might want to set the nudge to a millisecond or even a certain number of samples. Nudge the track being processed until you hear cancellation with the copied, 'reference' track. (You may not hear complete cancellation because the processing produces a different waveform, but you'll almost certainly note a 'thinning' of the sound.)

You have four different nudge options, three of which are editable under Options / Global (the fourth nudge option is simply up or down — this changes notes up or down one semitone at a time, and clips up or down one track at a time). For each nudge option you can specify a time increment as musical time (rhythmic note values), absolute time (seconds, milliseconds, frames, samples, and ticks), or have the nudged clip (or notes within Piano Roll view) follow snap settings.

Nudge by going Process / Nudge, then choosing which of the three nudge options you want to use, and whether you want to nudge left or right. Power users will prefer the keyboard equivalent commands, which are based on the numeric keypad and logically laid out. The equivalents are listed in the help file; just type 'Nudge' in the index, and select 'Settings'.