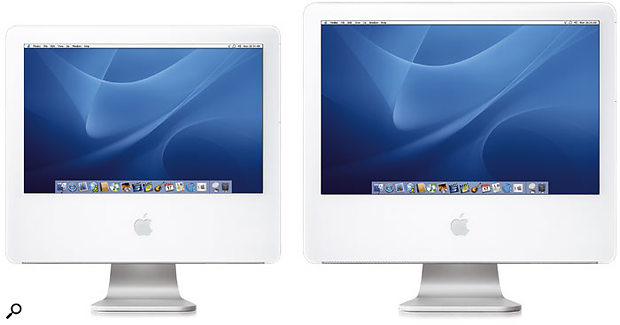 The new all-in-one iMac is available with either a 17- or 20-inch screen and features a G5 processor running at either 1.6 or 1.8GHz. Could this be the ultimate machine for Mac musicians looking for a G5 on a budget?

We discuss Apple's brand-new iMac, investigate how much power a musician can really expect from the latest Powerbooks, and explain how to save some hard disk space when installing Mac OS X.

"There's one other thing I'd like to talk about today," stated Apple's Senior Vice President of Worldwide Product Marketing, Phil Schiller, an hour and a half into his Apple Expo Paris keynote speech, continuing "I'm not sure how interested you are," as a slide appeared behind him displaying just one word: iMac. After supplies of Apple's Anglepoise G4 iMac ran out, the company were forced into making an uncharacteristic forward-looking statement about the availability of a newer model in September. And so, at the recent Apple Expo, Schiller got to announce a new and highly-anticipated G5-based iMac that breaks from the previous desk-lamp styling of the iMac with a slim, all-in-one design.

Rather than attaching the screen to a base unit, as in the previous G4 iMac, Apple have returned quite literally to an all-in-one design with the G5 iMac, building the screen and computer into the same enclosure, much like the original G3 iMac. However, unlike the original iMac, the new G5 iMac looks more like a slightly bulky LCD display, at around two inches thick, and floats on an aluminium stand in front of the user. Apple have a slogan on their web site that asks "where did the computer go?" But given that there's a huge flat area beneath the monitor, I think this is probably a question that doesn't need to be asked — although, joking aside, fitting a G5 processor into such a slim enclosure is quite a feat given the cooling requirements of the Power Mac G5.

According to Schiller, the iMac is "quieter than a whisper", a claim they apparently substantiated by measuring a whisper in decibels, which seems a little variable. However, having seen the new iMac G5 in a computer store, I can say that it didn't seem to be too noisy, although it's impossible to tell when the CPU isn't working hard and the three computer controlled fans in the case aren't having to spin too fast.

Schiller pointed out that if you choose the internal Bluetooth option and a suitable wireless keyboard and mouse, along with an AirPort card, the power cord is the only cable you'll need to plug into the new iMac. However, for those of us who need to attach MIDI and audio devices, the iMac offers three USB 2.0 and two Firewire 400 connections, modem, 10/100 Ethernet, a mini VGA connector for VGA, S-Video and composite video output, a headphone output (which doubles as an optical output) and an audio input. The connections, along with the power button, are located on the back, which makes sense in that it could have been messy to have cables hanging out of the side of the unit, although to have the headphone socket in such an awkward place seems a shame.

The pricing of the new iMac is going to make it immediately attractive, with the entry-level model costing £919 and featuring a 17-inch screen and a 1.6GHz G5 processor with a 533MHz system buss. You also get 256MB PC3200 DDR SDRAM (the new iMac can be upgraded to 2GB), an 80GB Serial ATA drive, Nvidia GeForce FX 5200 Ultra graphics with 64MB DDR SDRAM and AGP 8X support, and a slot-loading Combo drive. For £1049 you'll get a 1.8GHz G5 with 600MHz system buss and a Superdrive, while the third model adds a 20-inch screen and 160GB SATA drive for the hike up to £1349.

Look out for full coverage of the new iMac next month, when I'm hoping to be able to get my hands on a unit, to see if this is the musical Mac for those who want the power of the G5 processor without the cost of a G5 Power Mac.

One of the most popular aspects of the Macintosh for creative professionals is the fact that it runs fine for most tasks pretty much straight out of the box. And even when you find yourself reinstalling the operating system, it's really quite a painless affair requiring little configuration or user interaction. But did you know that you could save over a Gigabyte of hard disk space, and reduce overall installation time when installing Mac OS X (specifically 10.3)?

Just before you click the Install button, click the Customize button instead. On the Customize Install page, you'll see a list of packages, enabled to be installed with the Easy Install option, that I'm betting you'll never need. For example, do you really need 695MB of Language Translations so you can use Mac OS X in Norwegian or Traditional Chinese? Probably not, so disable the Language Translations. Similarly in the Fonts folder, there are 167MB of Additional Asian Fonts you won't need, along with 30.1 MB of Additional Speech Voices, which, unless you like your Mac to talk to you, or you're Radiohead, are unnecessary.

Finally, it's worth going through the Printer Drivers folder and only installing the printer driver packages you know you're going to need, along with Gimp-Print Printer Drivers. And is it really worth installing the old Mac OS X version of Internet Explorer any more, when you have Safari or a Mozilla-based browser? All in all, rather than the 3GB of space required for the typical Mac OS X install, a slightly pruned Custom Install requires just 1.5GB instead.

What About The Powerbook?

It's been a while since we looked at Apple's portable line-up in Apple Notes, and while many speculated, after looking at the engineering of the new iMac G5, that "if they can put a G5 in an enclosure like that, G5-based PowerBooks can't be too far behind," Apple have stated that this really isn't the case. In the absence of G5 Powerbooks, the relatively portable (but not battery-powered) G5 iMac may not be a bad alternative in some situations, but what if you really need an Apple laptop to get your work done? How much can you realistically expect from the current G4-powered models, compared to your G5 desktop?

I recently ended up putting together a small system as a favour for a friend, based around a 1.5GHz 15-inch Powerbook with 1.25GB RAM, using a Digidesign Mbox (with the factory software bundle) and Native Instrument's Guitar Rig software. The Mbox ran well with the Powerbook and the Pro Tools LE demo song played back with CPU performance peaking at around 70 percent in the User parameter of the Activity Monitor (Applications / Utilities / Activity Monitor), with around 20 tracks of audio, automation and a handful of basic DigiRack plug-ins — although the graphic meter in the Pro Tools application itself showed around 30 percent CPU usage. While the Powerbook only has a 5200RPM drive, disk usage in Activity Monitor indicated a sustained data throughput of around 6MB/sec, peaking at around 8MB/sec, and showing around 25 percent usage in Pro Tools.

Running the Mbox with the Powerbook was a great deal of fun, but I was really curious to see how this machine would compare when running the same tests I used back in February and March's Apple Notes for the dual-2GHz G5. The outcome would, of course be obvious, but to repeat my question from earlier in this column, the real question (and the point of running the tests) was how much we can realistically expect from the current G4-powered models, compared to a G5 desktop. As a side note, I used the Powerbook's built-in audio hardware — and not the Mbox — for the tests, since I'd used the G5's internal audio hardware for the previous tests. 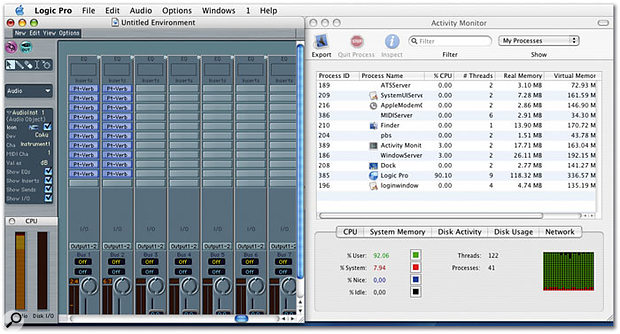 Here you can see a 1.5GHz G4 Powerbook being put through its paces running 20 Logic Platinumverb instances.

Staying with reverbs, although I never did a Space Designer test with the dual-2GHz G5, the 1.5GHz Powerbook managed four stereo Space Designer instances, each loaded with the 2.6-second Large Hall preset. Adding a fifth instance overloaded the system, and with four Space Designer plug-ins the User reading in Activity Monitor showed 82 percent.

The other test I carried out with the dual-2GHz G5 was an EXS24 test, loading in a basic 16-bit, 44.1kHz Harp instrument from the EXS24 edition of the Vienna Symphonic Library and seeing how many voices I could play under various conditions; so, again, I decided to repeat this for the Powerbook.

To briefly explain the test, each stereo instance of EXS24 I used had the Harp instrument loaded, which required 386.7MB memory (I left EXS24 's Virtual Memory option disabled, as streaming the samples from the Powerbook's internal 5400RPM drive would only limit the number of voices obtainable.) Each EXS24 instance played back a sequence with 64-note clusters to guarantee continuous 64-voice playback in EXS24, and the filter was disabled. In this way, I was able to get 276 voices, made up from four EXS24 instances playing back 64 voices each and one instance giving the extra 20 voices, with the User parameter at approximately 97 percent.

As EXS24 users probably know, the trick for getting the maximum performance out of this sampler is to set the Sample Storage setting in Preferences to 32-bit, so that Logic doesn't have to convert the 16-bit integer samples to 32-bit floating point during playback. Using 32-bit float sample storage, I was able to get 660 voices, with 10 EXS24 instances playing back 64 voices each and one additional instance playing another 20 voices. The User parameter showed around 97 percent usage. Enabling the filter has a dramatic impact on performance, reducing the number of voices to 106 with 32-bit float storage (at 95 percent User CPU) and 84 with 'Original' 16-bit (at 96 percent User CPU).

By way of comparison, with filters disabled the G5 managed 704 voices at 16-bit and an almost unbelievable 3264 voices at 32-bit float; with filters enabled, the figures were 192 and 256 voices respectively.

While the tests described here are somewhat academic and, as I pointed out in the original G5 article, the EXS24 test is slightly imperfect (because the use of caching within the system will give a voice count higher than if you had multiple instruments loaded and each was playing back 'unique' notes), the results for both computers can at least be reliably compared.