Examine the Pattern lane of this Redrum sequencer track and you'll see each pattern change going adrift by an eighth note every couple of bars. This arises because pattern A1 in the example is effectively in 4/4 (16 16th-note steps) and pattern A2 is in 7/8 (14 16th-note note steps). When you're working with this kind of material, the bar numbers at the top of the sequencer window are less important than the grid resolution in the Pattern lane.

Reason seems firmly fixed in a 4/4 time signature — but clever use of the Redrum and Matrix pattern-based devices allows you to explore more unusual signatures. Here we explain how, as well as bringing you the essential news and tips.

We'll kick off this month's column with tidings of a new Refill from Propellerhead. They continually surprise us with extra free content for Reason, but their latest release is not in that category. Like the excellent Strings Refill released a while ago, the new Reason Drum Kits set (£79) is the product of a lot of recording and editing — there are more than 10,000 individual drum, cymbal and hand-percussion samples at the heart of the collection. Real drums and spaces were captured during the recording process. 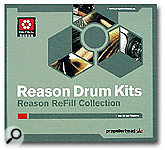 The resulting kits have been created for the NNXT mega sampler, though a simpler collection of Redrum sets drawing on the same raw samples is also provided. NNXT 's mega multisampling and velocity-splitting capabilities have been used to the max, to provide a realistic drum experience. And the kits themselves are provided in a number of formats. For a start, they come in both 24-bit and 16-bit resolutions — thus the set is distributed on a DVD, since the 24-bit ReFill occupies 1.9GB of space!

Users will need a lot of RAM to get the best out of Reason Drum Kits, and a fast computer to help with loading times, but initial auditions indicate that the slight inconvenience is worth it. (Using 16-bit stereo patches keeps the load to a minimum.) The disk is rounded off with a range of template and demo songs that show off the collection to good advantage and give users some good starting points. The Scream 4 distortion device features amongst these song files, adding an industrial edge to the kits' outputs, and the extra Scream 4 patches are augmented by a nice set for the RV7000 advanced reverb. SOS will go into more detail about Reason Drum Kits in an issue coming your way soon. In the meantime, check out www.propellerheads.se

In its current incarnation, Reason doesn't have a tempo track, so if you really need this facility in your Reason work you'll have to run additional software in tandem. The same initially appears to be true when working with different time signatures — the tempo track of the average MIDI sequencer also allows the user to automate time signature changes. In practice, though, the pattern-based composition offered by the Matrix step sequencer and Redrum drum machine means that it's possible to bodge signature changes quite easily. You'll just need to be organised!

Let's say you'd like to create alternating 4/4 and 5/4 bars in your Reason song. The 4/4 bar is easy: Redrum, with 16th-note resolution and 16 steps per pattern, gives you this right away. A 5/4 pattern is created simply by increasing the number of steps to 20. Note that writing a pattern will now require you to use the Edit Steps button to access steps 17-32, though only the first four steps will be needed.

Similarly, with the Matrix module, a 4/4 pattern will require 16 steps and a 5/4 one needs 20. In this case no switching is required, since Matrix lets you work with, and see at all times, up to 32 steps per pattern. The organisation now comes into play when chaining these patterns in the main sequencer window. Our example means that Reason 's default time signature, of 4/4, can be left in place, since even though we're alternating 4/4 and 5/4 bars, the basic pulse is still quarter notes (the denominator of the time-signature 'fraction' determines a piece's 'beat'). So set the grid resolution to 1/4, and enable 'snap to grid' (that's the little magnet icon at the top of the sequencer window). When you draw in Pattern automation changes on Redrum or Matrix tracks, in Edit Mode, draw for four beats for the 4/4 patterns and five beats for those that are 5/4. Simple — and it's just as easy if you're integrating 3/4 or 7/4 patterns. You'll need to keep track of which patterns are of which length when putting your song together, but it does overcome the lack of a tempo track.

Things become a little more complicated if you'd like to interject the occasional 7/8 or 11/16 pattern into your song, but the theory is the same. For example, for 7/8 bars in Redrum, set a pattern length of 14 and keep the resolution at 1/16. Likewise, set the grid value to 1/8 so that changes will occur within complete bars. You could alternate 4/4 and 7/8 bars in this way. Again, the global time signature is perhaps best left at 4/4, so that you can keep track of the fractional pattern changes during the composition stage. In practice, the time signature could be anything, so long as you know what the value of the grid is. In the 7/8 example, you need to know where the eighth-note steps are. Pattern changes will not be happening at exact bar lines, but the desired result, of changing time signatures, will be achieved.

Most virtual time signature/step resolution combinations should be possible within Redrum patterns, since they have a maximum length of 64 steps. The same is not true of the Matrix, since it maxes out at 32 steps. This becomes a problem if you're trying to work with the smaller note resolutions. The solution is to divide your patterns in two, and use your new organisational skills to keep track of which pair of patterns makes up the desired complete bar, and how many steps each has.

In this column, I've already touched on the universe of free Refills that can be found on the Internet. It's not getting any smaller, I can tell you, and it continues to be a fascinating experience to hear what other users are managing to squeeze out of a rack of instruments that I've come to know quite well. Each of my new Reason songs brings me another pile of patches to add to my collection, but I still find time to audition and analyse the work of others. 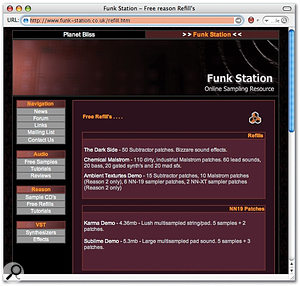 The free Refill page on the Funk Station web site.For example, I recently downloaded a couple of neat collections from Funk Station (www.funk-station.co.uk). The Dark Side is an intriguing and very abstract collection of Subtractor patches, moving the synth a good distance away from standard bass lines and lead parts and towards becoming the sound design tool any synth can be if pushed hard enough. Most interesting for me were the stereo patches. Subtractor is, of course, a monophonic synth, but the simple expedient of creating left and right elements to be loaded into two of the synths solves the problem (just remember to pan them hard left and right on their Remix channels).

To audition these patches, you'll need to to assign your controller keyboard to two of Reason's internal MIDI busses, and in the Hardware Interface that's at the top of every Reason rack, assign the left and right Subtractors to their own MIDI buss. Alternatively, create a Matrix sequencer, playing long notes, to help you hear the development of some of these patches. Route the Matrix's gate and note CV outs to the Split A and Split B sockets of a Spider CV merger/splitter device; now route cables from the split outs to the corresponding CV inputs of the two Subtractors. Takes less time to do than describe, and you'll be checking out stereo Subtractor synth impressionism in no time.

The other set I downloaded from Funk Station is the Chemical Malström Refill, featuring well over 100 patches for the Malström device. This is described as offering "dirty, industrial" patches, divided into lead sounds, basses, gated synths and "mad sfx". It's definitely worth a trip with the modem, and might well provide a texture you can use, or inspire you to explore sonic areas you haven't ventured into before.

Finally, you can also download a demo of Funk Station's Ambient Textures CD, released as a Zero G product and distributed by Time + Space (www.timespace.com). The full package costs £39.95, and includes a big collection of patches for Subtractor, Malström, NN19 and NNXT.