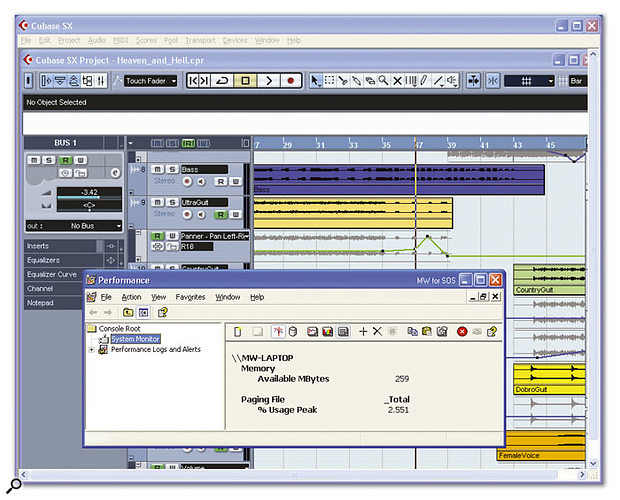 Using Microsoft's bundled Performance Monitor utility you can find out exactly what size of page file you need when running music applications under Windows XP.

We return to the great Page File controversy of 2003... as well as keeping you stocked with the usual PC news and tips.

In the PC Notes column of October 2003, I wrote an explanation of the workings of the Windows XP page file, along with some blanket recommendations for its Initial and Maximum sizes for musicians (100MB and 800MB respectively if you have 512MB or more of RAM). These figures were based on quite a bit of research, plus a lot of practical measurements on three of my own PCs (two desktops and a laptop) running a wide selection of music software, including Cubase VST and SX, GigaStudio, Sonar, Sound Forge, and Wavelab. They have worked perfectly for me ever since, without the page file ever growing beyond the Initial 100MB size.

However, these recommendations were intended for running most music software, and it's possible, if you're running other types of software, that your page file requirements could be considerably greater — Photoshop is one application that springs to mind. So if anyone has received an 'out of memory' message related to the page file after following my recommendations, they simply need to give it some larger settings. There are two possible approaches to this task.

The first is by far the easiest: revert to Microsoft's own very generous default settings for the page file, with an Initial size of 1.5 times your system RAM, and a Maximum setting of three times the system RAM. So, for instance, those with 1GB of RAM will, by default, end up with an Initial pagefile.sys file of 1536Mb. For those running a single instance of Windows XP on their PCs, and given today's huge hard drive capacities, the existence of this seemingly huge 1.5GB file shouldn't cause any hardships.

I've recently canvassed opinion from music software developers on this issue, and they agree — they want their software to work well with Windows XP 'straight out of the box', so they generally recommend sticking with the default settings, to avoid any problems caused by 'user tweaks'. However, it's unfortunate that, despite several emails to my contacts within Microsoft, no-one has yet been able to explain how the 1.5x/3x default values were arrived at, since this would resolve many forum discussions once and for all.

Here's some good news for owners of any of ST Audio's DSP24 soundcard range. Back in September 2003, ESI (Ego Systems Inc) acquired the rights to the ST Audio product range and now manufacture and distribute these products. ESI are also committed to future updates of ST Audio hardware. Moreover, they have undertaken to bring the EWDM (Enhanced Window Driver Model) driver technology from their own WaveTerminal and WaMi ranges to the DSP24 soundcard line. This technology includes the DirectWire patchbay to internally route the signals from one audio channel to another (so you could, for instance, port GSIF signals from GigaStudio direct to your ASIO inputs in Cubase, to add DirectX or VST effects).

This news is very welcome, especially since I've noticed some users of the DSP24, DSP24 MKII, DSP2000 and DSP3000 grumbling about synchronisation problems when running ST Audio's final official driver build (version 7.2.1014 for Windows 2000/XP) with Cubase SX and Nuendo. As I write this, ESI have already posted interim public beta version 7.3.1106 drivers on the ST Audio web site, as yet without the special ESI driver features, but users are already saying they can successfully run Cubase SX with lower latency values.

As I write, Microsoft have released a Beta version of Windows XP SP2 (Service Pack 2) to registered Beta testers, though it might well be available to all by the time you read this. The new version includes a reworked Firewall component, imaginatively named Windows FireWall, that will be activated by default to protect new PCs from Internet threats (the previous XP firewall had to be enabled by hand if required). SP2 also disables Windows Messenger, which is another target for spammers, and updates Internet Explorer to block pop-up adverts and stop unwanted downloads occurring. Support for Bluetooth and Wi-Fi wireless networking has been improved, and there's a new version of the DirectX graphics components.

I mentioned the second, more scientific, approach in my previous discussion: measuring the peak page-file usage with your own worst-case workload, and then choosing an Initial page file size that's somewhat bigger, to provide some 'headroom'. This will probably appeal to those with multiple instances of XP on their PC, and especially those who still question why they should need such large page files as a 'safety net' if they've installed loads of RAM and their page-file usage is tiny. Indeed, I've now run quite a few tests with music software that shows that my page-file usage rarely rises above 5MB, however large I make the page file. Here's how to measure yours so that you can decide on a suitable personal value to suit your system. 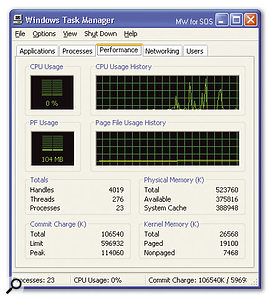 The Windows XP Task Manager displays this lower-left graph, labelled 'PF Usage', but confusingly it doesn't show actual page-file usage, only 'potential' usage under worst-case conditions.In the past I've recommended downloading the Cacheman utility (www.outertech.com) for monitoring actual page-file usage, since it provides all the parameters you need to see without making you set up any display options. However, Microsoft's own P erformance Monitor is already installed in Windows XP and can provide exactly the same information with a little effort. You can access it by clicking on the 'Administrative Tools' icon in Control Panel, and then on the Performance shortcut. The parameters we want to view are more easily displayed in numeric form, so start by right-clicking over the graphic display area and selecting the Properties option. On the General page change the View to 'Report', and then click on the Apply button. Now switch to the Data page, select each of the existing entries in the main Counters section, and use the Delete button to remove them.

Next, use the Add button to launch the Add Counters dialogue, and in the drop-down box labelled 'Performance object', choose 'Paging File'. Now you can select the '%Usage Peak' counter in the left-hand window and the '_Total' entry from the right-hand window. Now follow the same procedure to add a further counter for 'Available MBytes' for the Memory Performance Object. Your display should now look like the accompanying screenshot. You can save this setup for further use.

Now you can begin monitoring your page file and RAM requirements as you use your music applications in the normal way. When you're in the middle of your most taxing songs, just launch Performance Monitor and see what the actual page-file usage is. Here's a tip: if you set your Initial page file size to my previous recommendation of 100MB, its percentage Usage reading will be identical to its actual usage in megabytes.

The screenshot shows that on my Centrino laptop with 512MB of system RAM I can load up Windows XP and Cubase SX 2.x, and play the 'Heaven and Hell' demo song using about half of my RAM, while the peak page-file usage is only a minuscule 2.5 percent of its current 100MB size, or 2.5MB.

I noticed that someone posting on the SOS Forum was worried that XP's Task Manager showed a huge figure for page file usage when they still had lots of 'unused' system RAM. Unfortunately, XP's Task Manager displays a graph labelled 'PF Usage' that's rather misleading.

If you select the Task Manager's Performance page you'll see four graphs at the top for CPU Usage, CPU Usage History, Page File Usage, and Page File Usage History, while underneath are four sections labeled 'Totals', 'Physical Memory (K)', 'Commit Charge (K)', and 'Kernel Memory (K)'. What you're seeing in graphic form as PF Usage is in fact identical to the figure labelled 'Total' in the Commit Charge section — and this is not page file usage, but the maximum possible page file usage in a worst-case situation, a sort of 'reserved space for potential usage' (it's exactly the same figure that Cacheman displays less confusingly as 'Paging File Allocation') The only way you can measure the 'actual' page file usage is as previously explained.

Many thanks to London-based Opus Productions for pointing out a useful fact relating to my PC Musician feature, 'Installing A New PC Motherboard', in SOS December 2003. As Registered Microsoft System Builders, they say that changing the motherboard isn't an option for anyone with an OEM (Original Equipment Manufacturer) installation of Windows XP, since this installation cannot, apparently, be re-activated after such a change.

Microsoft's OEM software lives and dies on one machine, and if you change the motherboard it will see it as a new PC and refuse to reauthorise it. This is yet another reason to make sure you get a proper XP CD-ROM when buying a new PC.

Those of you with long memories may remember the extensive latency tests I performed on various PCI, serial, and USB MIDI interfaces back in SOS September and October 2002, in which I concluded that the fastest performers were of the PCI variety, closely followed by serial-port designs, while USB MIDI interfaces lagged behind slightly. Well, over the years I've wondered whether similar performance variations might be found with other types of device, and this month I've concluded that modems follow a similar pattern.

The best modem I ever used was an external US Robotics 56k Sportster model that cost about £80 and gave me excellent 46,666bps connect rates for years via its serial port connection, but sadly failed to work one morning when I switched it on, possibly as a result of a surge down the telephone line during an unexpected thunderstorm. (As an aside, If I can hear thunder or see lightning I always unplug any external modem from the telephone line, since connected devices can be fried in a microsecond if anything local gets struck by lightning. For similar reasons I always power down my PC and unplug it from the mains wall socket during electrical storms, since an entire motherboard can also be destroyed in an instant by an uncontrolled surge.)

My next modem was an anonymous and tiny external USB model that cost about £30. Once again it worked reliably for several years, but it never managed the same high connection rates of its predecessor, typically offering around 42,000bps — depending, of course, on the quality of the telephone connection. Following its demise at some time during the installation of the new motherboard in my main PC, I've been using the integral modem on my laptop to access the Internet. This regularly provides a good 44,000bps connection speed, but I'm not keen to rely on my new laptop's modem on a full-time basis, since a storm might take out my entire laptop if the laptop was plugged in.

I've now bought an anonymous 56,000bps Fax Modem with serial port interface for just £25, and sure enough my connection speed is back up to 46,666bps. Food for thought?