If you rely on Pro Tools, it's worth taking steps to avoid RSI.

Before there were computer-based recording systems, we spent most of our working time in front of a mixing console, sometimes turning away to use racks of outboard gear and a tape machine or two. When DAWs first started to appear in studios, they would often end up on a separate trolley or perched on the mixing console, but as computers have taken over more of the roles traditionally done by dedicated hardware, they have also tended to take centre stage in our studios. 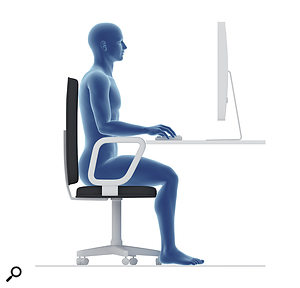 Correct posture is vital in avoiding RSI. The back should be upright with knees and elbows bent at right angles. You don't have to be naked or blue, though.The concentration of so many different functions within the computer has increased the potential for repetitive strain injury, or RSI for short. This is a blanket term covering health problems brought about by performing the same movements over and over again. Of course, RSI isn't restricted solely to DAW users or even computer users, but it is a big issue for people spending most of their working day at a computer workstation. So what can we do about this? In this article I am going to take a look at a range of options that we can use in a Pro Tools world, bearing in mind that no one solution is the right answer for every person and every problem.

Before we start looking at technological solutions, it should be emphasised that the best approach to RSI is to avoid it in the first place, and that means making sure that your working environment is ergonomically set up. How you sit, and the height of the work surface, are both crucial. Everything should be at right angles: for instance, the height of your chair should be adjusted so that your knees bend at a perfect right angle. If the chair is too high you won't be able to place your feet fully on the floor, while if your chair is too low, you will have to move your feet forwards or backwards so that upper and lower legs no longer form a 90-degree angle.

Your upper legs and your body should likewise form a right angle, and you should be sat up straight: no slouching or leaning forward. The height of the work surface should be such that your elbows also bend at 90 degrees, and — most importantly — a significant part of your lower arm should be supported and resting on the work surface. Having your keyboard or mouse close to the edge means you are going to have to hold your arm up and that will bring on RSI much quicker. If you have to hold any part of your body in tension, you will be much more prone to RSI: being relaxed and correctly supported is the key here.

Make sure you have a decent chair, not just a cheap office chair. I am in front of my computer for eight to 10 hours a day, and I invested in a custom-made chair that is designed just for me. I have also made sure that my work surface is just the right height for me too. Studios with multiple operators often have motorised desks that enable each operator to set the work-surface height to achieve that right-angled position referred to above. In addition, the position of the screen is critical too. The generally accepted distance for the screen is where your fingertips are when you put your arm straight out in front of you. There is some debate as to the height of the screen, though: some advise that the top of the screen should be level with your eyes, while others suggest that the centre of the screen should be level with your eyes. If you need to use glasses to assist your eyesight, you could consider a set of glasses that are optimised for screen use. Mine have made a huge difference to me, and I no longer find myself leaning forward to read the screen.

The Mouse Is Mightier Than The Sword

With appropriate, ergonomic configuration, many people find that they can work with the conventional mouse-and-keyboard interface without problems, especially if there is space to rest your arms between operations. Some people prefer 'ergonomic' keyboards where the keyboard keys are not in a straight line, but these are pitched at typists rather than workstation users. Some prefer keys with a short travel like those on the Apple keyboard, while others like keyboards with keys that have a much bigger travel. The cost of an additional USB keyboard is relatively small, and it's well worth the investment to suit your preferences.

A huge variety of alternative pointing devices is available for those who have trouble with conventional mice. Two of the most popular among Pro Tools users are Apple's wireless Magic Trackpad and the Kensington Expert Mouse Trackball.There is far more variety when it comes to the choice of pointing devices, reflecting the fact that the conventional mouse is often a prime cause of RSI. Try different mice and trackballs out and vary them over time, so you don't end up using the same mouse for years. I used to use a Microsoft mouse, and when I started to get trouble, I tried some other options. The wireless version of Apple's Mighty Mouse didn't suit me: although it doesn't have a wire I found it larger and heavier to use than the wired version. I also tried the Apple Magic Mouse, but found the edges uncomfortable to hold, and because the whole surface is also a touch pad, I couldn't rest my hand on it. But just because I didn't get on with it doesn't mean it's wrong: try all these devices out for yourself and go with what works for you. I am back with a normal wired Apple Mighty mouse, and I love that the scroll wheel works horizontally and vertically, making it very easy to scroll up and down the timeline and up and down the tracks with the same scroll wheel. 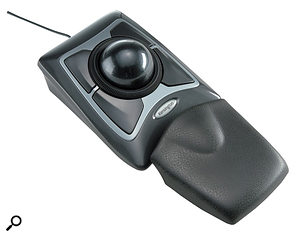 Other pointing devices are also well worth investigating. I know a good number of Pro Tools users who rely on the Kensington Expert Mouse Trackball, which also has programmable buttons that can be used to implement up to four Pro Tools shortcuts. I also know a number of folk who use a graphics tablet instead of a mouse. They find using a pen and tablet a very comfortable interface; once you've conditioned yourself to remember that the top left-hand corner of the tablet is the top left of the screen, you can really start to harness muscle memory, just as musicians don't need to look where they are putting their fingers on the fretboard. (Personally, I found I ended up holding the pen too tightly, like I did at school and I got cramps, but again, the key point is to find what works best for you.)

Another option is a touchpad. These have been standard on laptop computers for a long time, but now you can get stand-alone, multi-touch, wireless touchpads for adding to a desktop computer. Apple's Magic Trackpad matches their keyboard range, so you can have it as a seamless extension to the left or right of your keyboard if required. Mac users also benefit from an excellent piece of freeware called BetterTouchTool, which enables you to assign multi-touch responses and gestures to shortcuts and key commands within an application. Tamas Dragon and Ceri Thomas have both done a lot of work on developing shortcuts and gestures that work with Pro Tools. For example, Ceri Thomas has programmed a gesture that replicates the Ctrl+Tab shortcut for selecting the next Clip. If you go to Ceri's blog post (see links) you can download a cheat sheet and a set of gestures for import into BetterTouchTool. Tamas uses the pinch in and out gestures to zoom in and out, mirroring the 'R' and 'T' shortcuts in the Pro Tools Keyboard Focus, and sets up a four-fingered tap to open the Workspace window. You can see more help and advice and a video on Tamas's blog post in the Links section in this article. 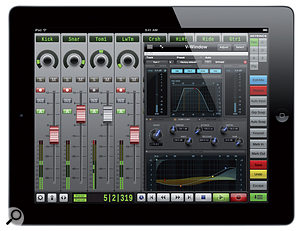 Neyrinck's V-Control Pro is an iPad app that offers detailed control over Pro Tools, including the ability to open and manipulate plug-ins.

Tablet computers such as Apple's iPad can also be used to control Pro Tools, and elevate the trackpad concept to a whole new level. Neyrinck, for instance, have produced two apps for the Apple iPad and iPad Mini that, in tandem with a small application on the host computer, enable you to control Pro Tools over Wi-Fi. Neyrinck V-Control is free so you can try it out, and if you like it, you can buy the full V-Control Pro app for the complete experience. V-Control Pro makes eight virtual faders visible on your iPad so it becomes a multi-touch control surface enabling you to move multiple faders at once. Even better, you can access plug-in windows and control plug-in parameters with your finger, and you get all of this for around £35 if you already own an iPad. What's more, even if you don't own an iPad, the price of an iPad and the V-Control Pro software is still lower than that of any Pro Tools control surface I know of, and because it works over Wi-Fi, you can use it as a portable remote control. I am seriously considering replacing my Avid Artist Control with an iPad running V-Control Pro until I can afford a Slate Raven.

Talking of which, the Slate Raven control surfaces take the iPad experience and blow it up big time, reproducing the entire Pro Tools user interface onto a large touchscreen and incorporating hardware monitor control functionality, so you can do everything from the Raven without having to touch your keyboard or mouse. We reviewed the Raven MTX, with its 46-inch screen, in the May 2013 issue, and the newer, smaller MTi provides a more cost-effective solution with a 27-inch screen and more basic monitoring features, but all the same software functionally as its bigger brother. Both of the Slate Raven controllers look to be very serious contenders to further improve the human-to-Pro Tools interface, and I shall be looking at them very closely. I do recommend you take a look at the videos Steven Slate has produced.

If you haven't already spotted it, the thread that links all the advice in this article is to arrange everything so you are as comfortable and relaxed as possible. Having to hold parts of your body in awkward ways guarantees you will quickly end up with aches and pains, which will lead onto RSI — and RSI can be very difficult to cure. Prevention is the best medicine, especially when your livelihood is at stake!

Advice and shortcuts from Ceri Thomas