As the Surface Pro hits these shores, long-time Windows users are still suspicious of Microsoft's move towards touchscreen functionality.

As I write this column, Microsoft's Surface Pro tablet has just become available in the UK, a whopping 11 months after its surprise unveiling in June 2012. Containing an Intel Core i5 processor, 4GB of memory, and a 64 or 128 GB solid-state drive (SSD), it effectively crams an Ultrabook into a 10-inch tablet format able to run standard Windows 8 software. Mainstream feedback has been good so far, with build and display quality, in particular, being singled out for praise (crisp, good contrast, 16:9 format and 1920 x 1080 resolution). However, battery life, weight and pricing are seen as somewhat disappointing and the single USB 3 port could be limiting for the musician.

With a stylus, touchscreen and traditional keyboard interface, Microsoft's Surface Pro is certainly a  desirable object, although its single USB 3 port may not be sufficient for the musician.Overall, the consensus seems to be that the Surface Pro is an excellent Windows tablet, although there are still more desirable or more cost effective Android and iOS devices available for the budget conscious. It is also not the best choice if you spend the majority of your computing time using a PC keyboard, as traditional laptops/Ultrabooks are likely to be more keenly priced, while the Surface Pro's add-on keyboard options are an extra expense and, although slim and elegant, aren't the best choice for extensive touch typing. Nevertheless, some musicians have already bought a Surface Pro, either to use as a stand-alone touch-based device, as a portable multitrack recorder for live gigs, or as an angled touchscreen device, in conjunction with a standard vertical PC screen.

The jury most definitely remains out on the Surface Pro as a dedicated audio workhouse, however. Given the huge number of BIOS and driver hurdles that most laptops have to jump to manage good continuous audio streaming at reasonably low latency, I suspect it could well be a bumpy ride. Longer term, I also suspect Intel Haswell-based tablets will become significantly more desirable for the musician, particularly given their longer battery life (typically up to 50 percent more than previous Intel CPU ranges). Of course, for all we know, Microsoft could well be working on a Haswell-based Surface Pro already!

There's no denying that Windows 8 is the perfect partner for the Surface Pro, but in the wider world things still aren't so rosy. In the ongoing battle of Windows 8 against the masses, a new study conducted by software maker Soluto suggests that Microsoft 8 apps are being largely forgotten and ignored by both laptop/desktop and tablet users. As I mentioned back in PC Notes March 2013, there's little to tempt the musician among the current apps, but it's still early days, so the situation may improve over the next few months. Certainly, the rumoured return of some sort of Windows start button, as I mentioned last month, seems to have been reinforced by the news that Microsoft have just released two new mice — equipped with start buttons! Perhaps in an effort to encourage more desktop/laptop users to embrace the touch-centric Windows 8 interface, the Sculpt Comfort mouse adds a touch-sensitive Windows tab on the left-hand side that you can swipe up and down to open apps and launch the multitasking menu respectively, while the Sculpt Mobile version adds a Windows key below the four-way scroll wheel.

Arguments also still rage on the Sound On Sound web site forums about Windows 8. Some speak of it with evangelistic zeal for the simple elegance of its new interface; others hate it for the confusion of its 'double desktop' design and Microsoft's insistence on them using their PC as a touch tablet, whether or not it's actually a tablet or has touchscreen functions! Some are swayed by W8's faster boot time from cold, but speaking as someone who invariably uses the Windows sleep mode rather than powering down and up, my PC is already back at the desktop in around six seconds, so this apparent benefit becomes rather academic.

In practice, launching and running applications is what most of us do all day, and in most tests there's arguably little difference between Windows 7 and 8 performance, other than cosmetic and personal preference. There can be issues with some aspects of audio driver performance (particularly with Firewire interfaces) under W8, and some musicians have returned to W7 as a result, while others who report W8 as being 'noticeably smoother or faster' could well be referring to what happens when any new OS is installed from scratch, before the bloat sets in. In reality, as far as audio performance is concerned, we're mostly still in 'gnat's whisker' territory, and if you're happy with Windows 7 and don't have touchscreen-capable hardware, I think there's little reason to go to all the trouble of changing your operating system just yet. 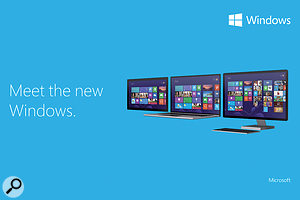 Get to grips with Microsoft's new way of doing things by downloading the Windows 8 guide.

If you're still unsure what all the fuss is about with Windows 8, why not download the 36-page Windows 8 End User Training Brochure from Microsoft? It includes plenty of clear illustrations of the new interface features in action and lists of touch and mouse gestures to reveal its charms, apps and groups, as well as plenty of convenient keyboard shortcuts. It's a tiny 5MB PDF from Microsoft's Download Centre at www.microsoft.com/en-us/download/details.aspx?id=39055.