Have some phase‑switching fun in Sonar X1!

Long‑time readers probably know that, whenever possible, I try to make this column applicable to programs other than Sonar. Granted, many of these techniques are easier or more convenient to implement in Sonar, and reference Sonar features and effects, but if you use another DAW, don't turn the page yet. As long as you have a way to flip a track's phase, you'll probably be able to translate these techniques to whatever DAW you use.

Phase switches are like the Rodney Dangerfield of consoles; they don't get no respect. A lot of people seem to think of a console's phase switch solely as "that thing to flip when some idiot wired the XLR cable out of phase”. But being able to flip phase can give some really intriguing special effects, and Sonar makes the process easy: not only does every console channel have a phase-flip switch, but so does the VC64 Channel Strip (which is particularly relevant, as it allows for parallel processing).

The general way to set up a track for phase‑switching fun is to copy the audio from one track to another track to create a parallel signal flow, then change the phase on one track. It's a little more complicated with buses, as buses don't have a phase switch, but there's a simple workaround we'll get into later. Meanwhile, let's look at some applications.

First, something I like to call 'Extreme Classic Phaser'. Cakewalk's Classic Phaser plug‑in does indeed give classic phaser effects, but let's do a few things to make the sound more extreme:

As you change the dry level, you'll find a point where the dry signal cancels with any 'remaining' dry signal in the Classic Phaser effect, leaving only those parts of the effect that are different from the dry signal. Not only does the phasing effect become more intense, the stereo imaging gets wider as well. Use the audio‑only track's fader to set the desired amount of cancellation.

Here's a really unusual phase‑flipping application. I like using saturation from time to time, but find that with percussive audio, like drums, the 'flattening' of the waveform and general muddiness can reduce dynamics dramatically. You can always try the 'mix in some straight signal' technique, as you would with parallel compression, but then you start to compromise the saturated character.

The following technique uses phase cancellation to help retain dynamics. This works because saturation affects the highest‑level signals the most, which, of course, are the percussive peaks. The lower‑level saturated signals are much more like the dry sound, so combining the saturated signal with the phase‑flipped dry signal tends to cancel the lower‑level signal while leaving the percussive peaks intact. Here's the procedure. To get a feel for how it works, first load a drum loop or other drum part: 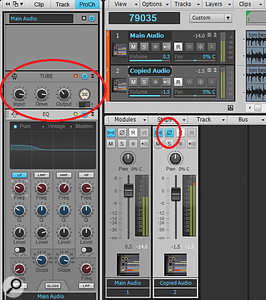 The Main Audio channel incorporates the Tube Saturator, set for Type 1, in the Pro Channel; a slight bass boost compensates for any thinness that can result from the cancellation process. Channel 2 has its phase flipped.

The greater the cancellation, the more the level will tend to drop. As it takes some tweaking to get just the right balance of phase‑flipped to processed audio, it's helpful to group the level controls for the two audio tracks, so that they track each other if you want to change the level. Right‑click on the level control for each track, assign each one to the same group, and now you can adjust the level without changing the distortion effect.

You might want to increase the bass a bit to compensate for any thinness that results from the partial cancellation; distortion affects the high‑frequency content more, so low frequencies will have more tendency to cancel. 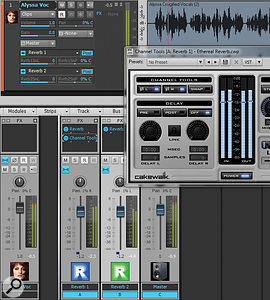 The vocal track is being sent to two reverb buses. Note that the Reverb 1 bus has Channel Tools inserted in the FX Bin to provide phase changes; unlike audio channels, buses don't have a dedicated phase‑flip button.

And now the pièce de resistance: a reverb sound you haven't heard before, except possibly in your imagination. This phase‑flipping effect works best with algorithmic reverbs, like the Sonitus:fx Reverb. The result is an ethereal reverb sound that's particularly useful with vocals, but works with other instruments as well.

We'll use send buses for the reverb, so we don't need to copy the audio to another track, as with the other techniques that flip channel phase. But we do need two buses. Enter Sonar's Send Assistant:

For comparison, turn off Channel Tools; you'll hear a huge difference. But note that, as with other effects that are based on phase‑flipping, the level of the combined sound might be a little low. Grouping the bus output controls lets you raise or lower them together if needed.

We've covered three phase‑flipping applications in previous columns: using phase flips to create vintage wah‑wah sounds, telephone/megaphone voices and the kind of over‑compressed, 'sucking' drum sounds used as a special effect in a lot of music from the psychedelic '60s. There are probably more cool sounds just waiting to be discovered, so give the phase switch some respect and you just might come up with something no one else has heard before.