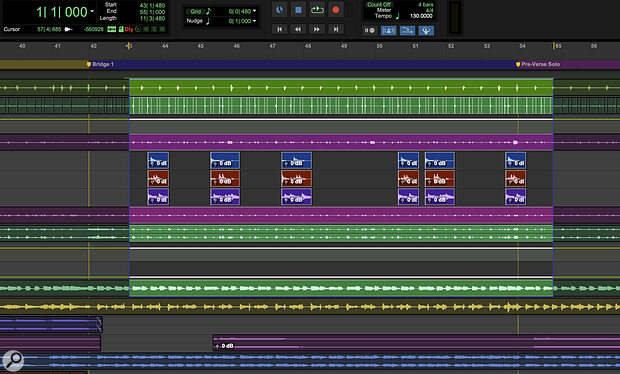 The 2021.3 update brings limited Big Sur compatibility, and more besides.

At the end of March, Avid released Pro Tools version 2021.3. While the preceding 2020.12 update brought with it some really significant new features, particularly Audio to MIDI and the integration of Melodyne, 2021.3 is more focused on OS compatibility for Mac users, bringing as it does limited support for Big Sur.

Unlike most OS releases where ‘support’ means exactly that, in the case of Big Sur something being ‘officially supported’ requires closer inspection, because Big Sur support can cover three scenarios: Big Sur on an Intel Mac (though, of course, not all Intel Macs are supported for Big Sur), Big Sur native support on an Apple Silicon Mac, and Big Sur on an Apple Silicon Mac via Rosetta 2. Not the simplest of situations. 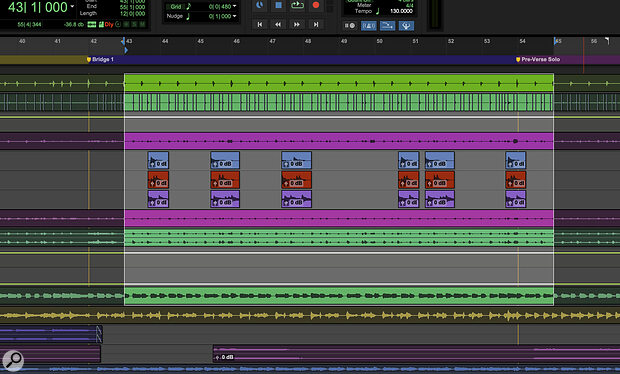 Figure 2. The latest version of Pro Tools adds some useful UI enhancements. Compare the visibility of the edit selection before (Figure 1, above) and after (Figure 2, shown here).

Add to this the fact that most DAWs include three software components — the DAW itself, third‑party plug‑ins, and copy protection — and things can get tricky. For this reason it’s important to proceed with care and check thoroughly that all the software you need to run is going to work before you attempt moving to Big Sur. That being said, in this kind of technology stand‑off someone has to move first, and Avid have announced Big Sur compatibility but with important caveats.

Pro Tools 2021.3 is compatible with Big Sur on Intel Macs. This applies to native systems as well as HDX and HD Native users, and users of the new Pro Tools Carbon interface. The included Avid plug‑ins are also compatible, but third‑party plug‑ins do of course need to be checked for compatibility individually.

Users of the MTRX and MTRX Studio should keep in mind that the DADman control and configuration software isn’t yet compatible, so they would need to wait until that is the case. While 2021.3 is tested and compatible on Intel Macs there are warnings from Avid that there are cases of higher levels of playback errors with certain hardware, specifically some models of MacBook Pro.

While this might sound like a messy situation, it’s probably appropriate to acknowledge that the transition from Catalina to Big Sur is the biggest change to the Mac OS in over a decade, and Rosetta 2 is a remarkable achievement, taking as it does a great deal of the pain out of this transition.

The situation for PC users is something of a footnote by comparison: Windows 10 version 20H2 is now supported with the release of Pro Tools 2021.3.

Pace, the makers of iLok, have announced that their system is compatible with Big Sur on Intel Macs and under Rosetta 2 on Apple Silicon Macs. (Native support on Apple Silicon is under development.) While that is great news for Pro Tools users, it is of course essential to make sure that the copy protection for all your plug‑ins is compatible with Big Sur.

There are some appearance changes in Pro Tools 2021.3, based on feedback from users about the new Dark Mode introduced in 2020.12. Aimed at improved usability, changes have been made to the way clips and edit selections appear to make them easier to tell apart, as well as other changes intended to improve visibility.

For Dolby Atmos users, which is increasingly relevant for music users, there are several improvements, notably to the creation of stereo objects and stereo folddown mixes, which are particularly useful for those wishing to open Atmos projects when working in a stereo monitoring environment.

Very relevant for music users is the ability to include MIDI output assignments in Track Presets and from the Import Session Data dialogue. Another feature popular with some Pro Tools users, especially those working on loop‑based music, is Dynamic Transport. In my opinion this is an overlooked feature — it has been around for a long time but I find many Pro Tools users are unaware of it. This alternative way of controlling timeline and edit selections, rather similar to the way Logic works, has been improved with two alternative behaviours when the timeline selection is moved during playback, with it either updating the playback immediately or at the next loop start. 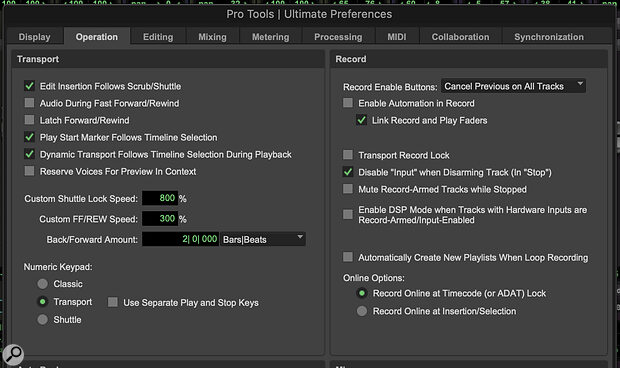 There are now two options for transport behaviour when using the Dynamic Transport feature.

Annual subscribers who pay up‑front or monthly (but not month‑to‑month subscriber or perpetual licence owners) will get two plug‑ins as part of a partnership with IK Multimedia: T‑RackS 5 SE and AmpliTube 5 SE.

AmpliTube 5 SE is a special version of IK’s popular guitar processor. It includes a total of 77 models of classic gear including 19 stompboxes, 12 amps, 13 cabs, eight speakers, five mics, 14 rack effects and six rooms. It is a cut‑down version, offering roughly half of the options available in the full version, but as can be seen from the numbers above it is far from limited. Compared to the two amps and two cabinets offered by Eleven Lite, it’s far more generous.

Checking the amps available, it’s reassuring to see an AC30, a Mesa Boogie, Fender SuperReverb and Deluxe Reverb, A Roland JC‑120, a couple of Marshalls and a couple of bass amps. With the obligatory high‑gain metal amps this seems to cover all bases.

T‑RackS 5 SE is naturally suited to home mastering applications, but this collection of 10 processors would be equally at home on mix duties. Four of the included modules are the current incarnations of the non‑specific, yellow ‘house’ processors which have been available throughout the history of this product: a compressor, a multiband limiter, an EQ and a clipper. Of the others, apart from the de‑esser and the Room reverb, they all reference recognisable classic hardware such as the Fairchild, 1176, LA‑2A and Echoplex. Worth mentioning specifically is that all of these 10 modules are available as individual plug‑ins for use in Pro Tools.

The other product bundled to be updated is UVI’s Falcon. This has been available for free to qualifying Pro Tools users for some time, and has now been updated to Falcon 2. The bewildering number of options has been increased to dizzying. If you have the spare week or two necessary to really get to know this hybrid synth you’ll find new features such as an additive oscillator, a Sallen Key filter and 150 new wavetables joining the plethora of alternative oscillators, from granular to slice with everything in‑between. And, with Falcon 2 being a hybrid instrument, the distinction between sampling and synthesis falls away, allowing the seamless combination of synthesis and sampling in the same layer. Of course if all of this sounds like too much work it does ship with over 1000 presets.

There is a great deal of experimenting to be done if you want to properly explore such a huge instrument, and something which has long been a frustration for laptop users of Pro Tools is the necessity either to carry a MIDI keyboard with you when designing sounds or composing with MIDI, or to have to draw in MIDI data to be able to audition your patches. Other DAWs have long had a version of ‘musical typing’ available, for example Logic Pro’s Caps Lock keyboard or Studio One’s ability to set up the QWERTY keyboard as a MIDI device. 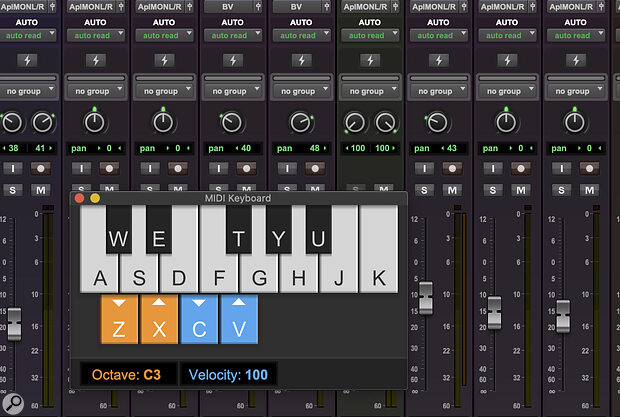 You can now use your QWERTY keyboard as a MIDI keyboard.

Carrying around a miniature MIDI controller so I can play with synths in Pro Tools when travelling reminds me of how I used to carry a drum machine and MIDI cable if I wanted to run a click track in Pro Tools 20 years ago. It shouldn’t still be like this — and now it isn’t. With Pro Tools 2021.3 you can use your QWERTY keyboard as a MIDI controller to trigger and play software instruments. Go to the Windows menu or use the shortcut Shift+K to activate it.

Finally, Avid have also announced the release of a replacement for the old Sync HD peripheral, the Sync X. While principally of interest to people working with video (and increasingly small numbers even of them), the consequence of this release which might be of interest to music users is that it is likely to mean more of the old Sync HD units become available secondhand, and that prices are likely to see a drop. So, if you have a tape machine but have never tried sync’ing it up to Pro Tools HDX because of the expense of a Sync peripheral, now might be a good time to try it.