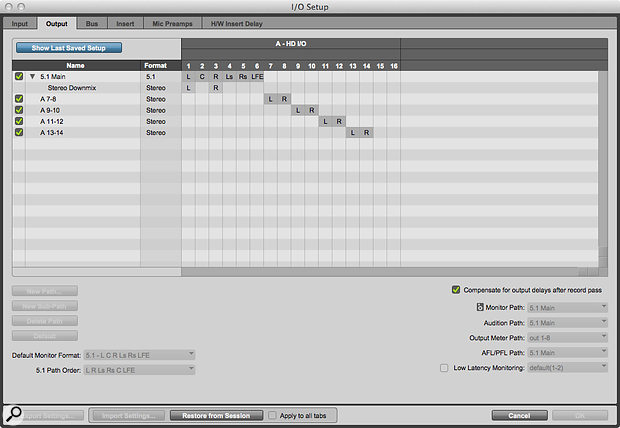 If you want to address more than 32 inputs and outputs simultaneously, you’ll need Pro Tools HD with Avid HDX or HD Native hardware.

Which audio interface is right for you and your Pro Tools system?

When they launched Pro Tools 9 back in 2010, Avid broke the links that tied the native version of their Pro Tools software to their own hardware. More recently, they have discontinued many of their own audio interfaces — namely, the Avid-branded versions of the Apogee Duet and Quartet — without introducing obvious replacements. So, if you are looking to set up a new Pro Tools system, but you don’t have the need or the budget for an HDX or HD Native rig, the chances are you will need to invest in a third-party interface. But which one?

In theory, any interface that has Core Audio (Mac OS) or ASIO (Windows) drivers should work with Pro Tools. If you are not sure whether a specific interface is approved for Pro Tools use, check the manufacturer’s web site and in forums like the DUC, to see if there are any reports of issues. In general I would suggest sticking with the well-known, established manufacturers, and especially those that have a relationship with Avid, such as Focusrite and UA.

In the days when we were forced to buy from Avid’s product range, it was usually pretty obvious which interface would best meet our needs. Now that Pro Tools users have such a huge field of third-party interfaces to choose from, by contrast, it can be much harder to make the right decision. It might sound obvious, but the first step on the road is to ask yourself what you need this interface to do.

First of all, how many inputs and outputs will you need? Getting this right is important, and you should think about how your needs might change in the future — for instance, by making sure that your chosen interface has ADAT digital I/O as well as analogue inputs, so you can easily attach additional mic preamps. One thing to bear in mind is that with non-Avid interfaces, Pro Tools is limited to 32 simultaneous inputs and the same number of outputs, even if you’re running the HD Standalone version. This doesn’t necessarily mean you shouldn’t consider interfaces that have more than 32 of either, but if you do, be aware that Pro Tools won’t be able to take full advantage of them, and be sure to check that it’s possible for Pro Tools to address any 32 of its inputs and outputs, not merely the first 32 of each. If you need more than 32 channels of simultaneous I/O then you will need to go to a Pro Tools HD Native or HDX System. However, if you only need more than 32 channels of I/O occasionally, consider renting a Pro Tools HD system for those occasions. You will still be able to overdub and mix the resulting sessions on a native system — the limit is on simultaneous I/O, not the number of tracks that can be played back.

If you are going to be recording large multitrack sessions, it’s worth giving some thought not only to the number of inputs required, but to how many outputs you might need. Even if you have only a single pair of monitor speakers, and mix entirely in the box, you may well find yourself wanting to give separate cue mixes to multiple musicians.

At the other end of the scale, there are many situations where an interface with just a couple of inputs will be fine. If you are mainly overdubbing single instruments and vocals, editing or mixing, you will need very little I/O as long as you are not using outboard equipment.

If your work is mainly mastering or mixing and you work with a console or summing amp, you might not need many inputs, but you will require a decent quotient of analogue outputs to feed the mixer or summing amp. Likewise, if you are working in surround, you will need at least six output channels for 5.1, eight channels for 7.1 and possibly more if you want to be able to output stereo mixes as well at the same time. Note also that you will need the HD Standalone version of Pro Tools, as the standard native version does not support surround track formats.

If you already have a console or outboard mic preamps, you probably need only line-level analogue I/O, but if you are starting from scratch, it is worth considering an interface with integral mic preamps. This is convenient, especially if you do location recording, and is often the most cost-effective way to get a system with two, four, or eight mic preamps. If you only require additional inputs occasionally, consider an interface with an ADAT port, which will give you the option of hiring or buying an external mic preamp as needed. For location work, I have a UA Apollo Twin and when I need extra inputs I use my Focusrite OctoPre to give me up to 10 analogue inputs.

At the other end of the signal chain, consider how many headphone outputs you need, and what monitor control features you’ll require, if any. Many audio interfaces offer at least a hardware volume control, but some go much further, with speaker switching, talkback, dim and mono buttons.

As well as line-level and mic-level analogue signals, audio interfaces also offer numerous different varieties of digital I/O. ADAT ports are, as we’ve seen, a convenient way of attaching external mic preamps. Stereo S/PDIF and AES3 digital inputs are often used for the same purpose, but there are some contexts where you might want a lot of AES3 I/O to interface with other digital hardware such as older digital mixing consoles and multitracks.

For large digital I/O counts, you should also look into MADI and the various Ethernet-based audio-over-IP options. The MADI protocol allows up to 64 channels of audio to be transferred down a single cable, and companies such as RME make a range of cost-effective MADI interfaces. Many modern digital consoles have MADI I/O as an option, so you may need this to integrate your Pro Tools rig into an existing live or studio setup. 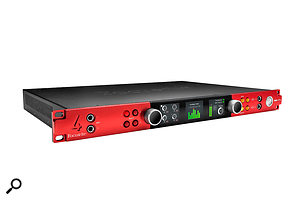 The best of both worlds? Focusrite’s Red 4Pre combines native Thunderbolt interface capability with the ability to act as a converter for an HDX rig.Audio-over-IP is a more complex proposition, with numerous competing formats on the market. There is a growing number of audio interfaces that offer audio-over-IP expansion in addition to built-in I/O, like the Focusrite Red 4Pre and 8Pre and the MOTU AVB series. There are also systems that are solely based on audio-over-IP, such as Focusrite’s RedNet range.

Finally, another fundamental point is to make sure that whatever interface you buy is compatible with the computer and operating system you plan to use. We are in a period of transition at the moment where FireWire has been largely superseded, and Thunderbolt and USB are evolving fast. In general, if low latency is important to you, you are likely to achieve better results with either a PCI or a Thunderbolt interface than with USB2 or USB3. However, not all Thunderbolt interfaces are supported on Windows computers, and Thunderbolt 3 peripherals are not backwards-compatible with Thunderbolt 2. Note also that there are some interfaces, such as the Focusrite Red 4Pre, which can operate natively as Thunderbolt interfaces, but which also have Digilink connectors that allow them to be used as converters for a Pro Tools HDX system.

There are, unfortunately, a lot of choices to be made when buying a new audio interface for use with Pro Tools, and it’s very important to do as much research as possible — an article like this should only be the start. On the plus side, the intensive competition means that audio interfaces are constantly getting better and cheaper, and as a result, sonic differences between them are nothing like as marked as they once were. If you do want to make the decision on the basis of sound, you’ll need to find a way to audition known material in a very good listening environment!

Where Is It Going?

Avid’s HD I/O interfaces have a built-in fan that could prove problematic in a quiet recording environment.This may seem like a strange thing to be worried about, but if your audio interface is going to be in the room you are recording in, it needs to be quiet — and not all interfaces are. The fans in the Avid HD interfaces, for instance, are pretty noisy; if you are capable you can replace them with a much quieter fan, but of course that will have implications on the warranty.

If the interface is going to end up in a machine room, noise is perhaps unimportant, but what if there are controls on the front panel that cannot be adjusted remotely?