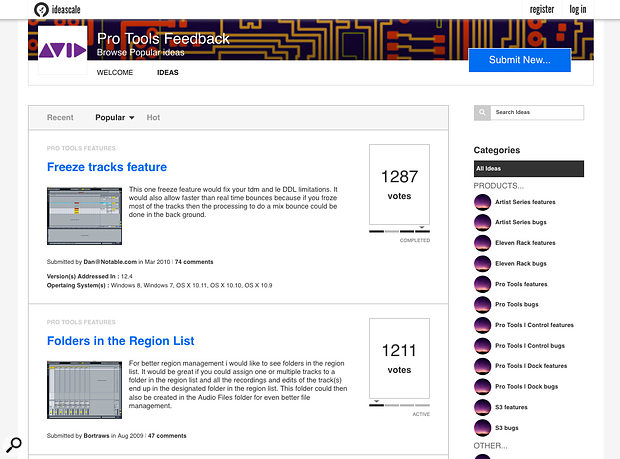 For the last eight years, Avid have used the Ideascale web site to gather user feedback on bugs and feature requests.

We look at the most popular Pro Tools feature requests, and explain how you can adapt where they haven’t yet been implemented.

Back in August 2009, Avid launched the Pro Tools Ideascale web site at http://protools.ideascale.com to act as a public clearing house for user feedback, bug reports and new feature ideas. The idea is that users can make feature requests which are then voted on by other users, allowing Avid to see what people want included in future versions. Whilst visiting the Pro Tools Ideascale site recently, I looked at the top 20 feature requests and was surprised by how many were yet to be implemented.

This feature request really needs no explanation: it would add a mono fold-down button on any Master Fader channel, to make mono compatibility checking easy. There is an argument that this function is best left to your monitor controller, but a lot of people don’t use one, so to have this feature built into Pro Tools might be very helpful.

Workaround: In the meantime, there are a number of free plug-ins that can do this, including Brainworx BX_solo from Plugin Alliance, 4U Meter, Fader, & MS Pan from HOFA, and the Stereo Tool plug-in from Flux. All offer more features than just a simple mono button, but all can put a stereo signal into mono to achieve the desired end result. Just remember to bypass or remove the plug-in before you do your final mix!

Many other DAW packages offer ways of collating groups of tracks together, to help track management in larger projects. For example, if you had 32 tracks of drums, wouldn’t it be nice to be able to hide all those tracks by clicking a folder icon so that all you had was a stem or VCA track showing? Then you’d be able to edit the drums as a body by making edits on the folder track, or open it up again if you needed to dig in and edit individual drum tracks.

Workaround: The easiest way to achieve a similar workflow at present is to use the Group function. By selecting all 32 drum tracks and creating a group, you allow them to be edited as one track. You can also hold down the Ctrl key (Mac) or Start key (Windows) and click on the group name in the group list in order to hide everything that’s not in the group. Alternatively, you can use the multiple selection options in the Show/Hide Tracks list to show and hide all the drums tracks. You can also tie this into Window Configurations to set up a range of different Window Configurations displaying different combinations of tracks, and finally, assign those to Memory Locations to easily jump from one window configuration to another.

This request was made back in August 2009, when ‘wrapper’ options were limited to FXpansion’s VST to RTAS plug-in. I suspect it is mainly asked for by users on a budget, who want to tap into the wealth of cheap or free VST plug-ins that are available.

However, the flip side of VST being an open standard is that there is no control over the quality or stability of VST plug-ins. Avid’s philosophy has always been to make sure that plug-ins for Pro Tools are made available only if they meet approved standards, which is why they have never chosen to support the VST format, and why it is unlikely that this feature, however popular, will ever be included in Pro Tools.

Workaround: Although Avid no longer allow developers to release simple ‘wrappers’ whose only purpose is to host VST plug-ins within Pro Tools, they do permit the creation of more sophisticated hosting and chaining plug-ins such as Blue Cat Audio’s PatchWork and MB7, so if you do want to use VST plug-ins in Pro Tools that are not available in AAX format, this should be your first port of call.

Workarounds: The obvious option is to create a stereo track adjacent to the two mono tracks and drag the content across. This is easy enough, but still leaves you needing to copy plug-in and send settings across, and set the routing of the new track, so the option to select two mono tracks, right-click and choose Make Stereo Track would be more comprehensive and faster. Some people have apparently created macros in Slate Digital’s Batch Commander to achieve this.

When I import an OMF or AFF project into Pro Tools, all the tracks are mono, so one of the first things I have to do is make stereo tracks and move any stereo content across from split mono tracks onto single stereo tracks. I save time by having template sessions which have a number of stereo music, effect and dialogue tracks already present, so once I have done the import, I click and drag the audio from the imported track using the appropriate modifier keys to constrain horizontal movement but making a copy as I drag. Once I have copied everything off the imported tracks, I then apply ‘Hide and Make Inactive’ to all of them, so if there is an issue later on I still have all the original imported content on inactive tracks down at the bottom of my session.

Imagine a scenario in a post-production session where you need to create 30 Foley tracks named ‘Foley 1’, ‘Foley 2’ and so on. In the current version of Pro Tools, you have to enter these names manually one by one, which can be time-consuming to say the least. Wouldn’t it be nice if you could select a number of tracks, type ‘Foley’ and let Pro Tools append consecutive numbers or other characters to each track? The feature should also be smart enough that you can start from an existing number, in order to add further tracks to a pre-existing setup. And while we are at it, it would be nice to have a similar batch naming feature for buses, inputs and outputs in the I/O Setup window, too.

Workaround: The only workaround I can think of is to use a macro application such as Keyboard Maestro. It might be a lot of work to program up a macro, but once done it would be easy to use it over and over. Anyone up for the challenge?

Frankly, I am surprised this one is as far down the list as number 11! Even so, at the time of writing it has 736 votes, which is more than half the votes for the most popular feature request. Most software can have more than one document open at any one time, so why not Pro Tools? The ability to copy and paste clips and so forth between two open sessions would be so useful.

Workarounds: Pro Tools offers several ways of transferring data between sessions, such as Import Session Data and Export Tracks. If I need just a couple of clips, I normally go into the source session and copy the clips I need across to a new track and label it Transfer, then close and save the session. Then, in my destination session, I use Import Session Data to import just the Transfer track, but it’s a lot of work when if you could simlpy copy and paste between two windows. You can do it in some other packages, but not Pro Tools.

Next month, we’ll look in detail at the top five user requests.