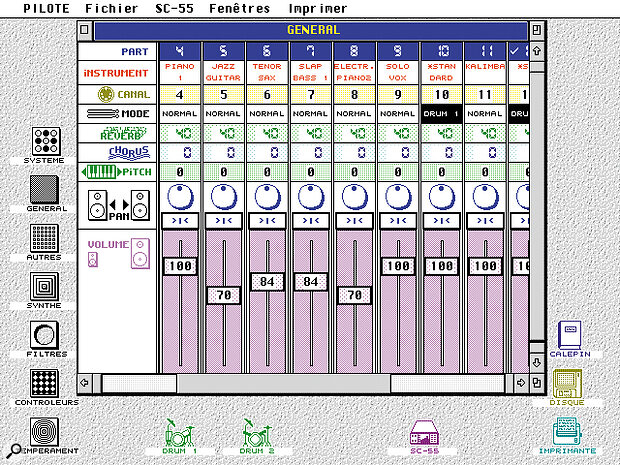 The last few months have seen some interesting developments in the Atari music world. As a result, you can look forward to coverage of some unexpected blasts from the ST's past in the next couple of columns.

We'll kick off this month with some great news regarding QUiNCY, the 8‑track digital recording package for Falcon. QUiNCY was originally a fully commercial package, but is now available direct from the author, Gilles Barges, as shareware (registration is a bargain 200FF, or about £20). 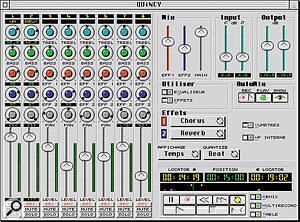 QUiNCY (now at v3.01) uses a familiar tape metaphor and can record up to eight tracks of CD‑quality audio, which may be played back through a fully automated mixer, with pan and level controls plus 2‑band EQ and two internal effect send/return loops, then mixed to stereo. Each channel of the mixer is also equipped with mute and solo buttons and a bar‑graph level meter. MIDI clock can be generated to sync an external sequencer and MIDI File playback is also available within the software. One particularly nice feature is that all eight tracks can be digitally bounced to one or two tracks, to help you make the most of QUiNCY's facilities.

Recording is non‑destructive, and a punch‑in/punch‑out record option is available. There's an audio cueing facility, and an an elapsed‑time display which can show hours/minutes/seconds, SMPTE, or bars and beats. Up to nine locator points are available; and looping between two points is possible. One or two inputs can be recorded by the Falcon's analogue inputs, but using third‑party audio interfaces such as those from Line Audio (distributed by System Solutions) allows up to eight tracks to be recorded at once, via the DSP port. Line Audio also produce hardware units that allow all eight tracks to be output separately, without any mix processing.

A built‑in sample editor offers cutting, copying and pasting facilities for audio segments, plus DSP functions such as level correction and fade‑in/‑out. There's also a useful tool for quantising audio against MIDI events. Audio can be exported and imported in AVR and AIFF formats, allowing QUiNCY‑generated material to be tweaked with even a Mac or PC‑based audio editor. Although the screen dump accompanying this column shows QUiNCY in French, the software is available with an English‑language interface.

The author's own Falcon has been pumped up with the ScreenBlaster Video Accelerator and runs the MagiC 4 alternative OS with NVDI 4, but he says that QUiNCY "runs great on any Falcon with at least 4Mb RAM." A hard drive is obviously required, but though both SCSI or IDE drives can be used, a SCSI drive is recommended. Note also that QUiNCY is a processor‑intensive application, and while it will run in 16‑colour mode it prefers 640x480 pixel mono resolution.

I wondered (as you might be) where the name QUiNCY came from, so I asked Gilles. His response was that many art software packages take the names of great painters (remember Degas on the Atari?), and that since his program was music software he'd borrow the name of a great musician: Quincy Jones.

Another bit of software from Gilles, which probably has wider appeal, given that it runs on any TOS‑based computer, is SC Pilot, an editor for Roland's SC55 Sound Canvas. The interface is easy to comprehend and use, with all the module's editable parameters accessible on screen. Good use of keyboard shortcuts (including F‑key access to the main edit windows) means that nothing is more than a keystroke away. An on‑screen keyboard even lets you audition edits from the computer. Patches and drum kits can be saved to disk, and beamed to or from the SC55.

There are some nice touches to the program that have nothing to do with its abilities as an editor/librarian, such as the way in which the window unrolls when you boot the program or return from the 'Relax!" screensaver mode. And though designed for the SC55, it will actually tweak the parameters of close relatives in the the Sound Canvas family. SC55 Pilot v1.4 has French and English language options and costs a mere 100FF (about a tenner in sterling) to register. Registration produces the customary warm feeling, encourages Gilles, and provides you with a printed manual and software which doesn't regularly flash up a shareware notice.

Sharward Promotions are putting on another All Micro Show at Stafford's Bingley Hall, on April 8. Details are sketchy at the moment, but there are plans for an Atari presence. Keep up to date by visiting Sharward's web site, or give them a call nearer the day.

Bad news for anyone who has been waiting for Centek's Phenix TOS‑compatible computer (covered in this column in the past) to surface: development of the French machine has effectively ceased. The reasons are shrouded in rumour and hearsay, but it's fair to say that while hardware development was well advanced (the hardware had outings at various recent European shows), the necessary high‑performance OS (Dolmen) was never finished. Dolmen was central to Phenix's operation: apart from exploiting its twin 060 processors, 20‑bit audio and scalable DSP sub‑system, the OS offered TOS compatibility. Phenix's creator, Rodolphe Czuba, has since taken his experience in hardware development to Silicon Fruit (rczuba@siliconfruit.com.