Propellerhead's Rack Extension Shop is filling up with tempting goodies... 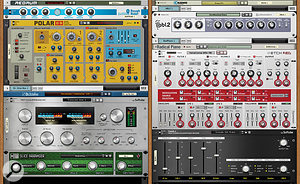 By opening up the rack to third party developers Reason 6.5 once again feels like a new frontier, ripe for exploration and experiment.

Reason 6.5 (and Reason Essentials 1.5) is finally available, and lets you fill your rack with all manner of fancy new Rack Extension devices. In this month's column, we're going to look at what's new, take a whistle-stop tour of all the Rack Extensions currently available, and also explore the curious new Pulsar device.

Reason 6.5 is as helpful as it can be when you try to open songs that include Rack Extensions you don't have. You might end up with non-functional 'placeholders' in your rack, but at least you'll still be able to do something.

If you're looking for obvious visual or operational changes in the new versions there are actually very few. One thing you'll immediately notice, though: the Create menu, and the right-click rack context menu have a new submenu organisation. Reason devices are now grouped, quite sensibly, into four categories: Instruments, Creative FX, Studio FX and Utilities.

As for Rack Extensions themselves, here's the lowdown. There's just one place to get them: shop.propellerheads.se. You can Try or Buy — the trial period is a generous 30 days — and either way the download should be handled by that Authorizer application, which launches automatically when required. After a Rack Extension download is complete, restart Reason to get it to appear in the Create menus.

You also have to be aware of some limitations regarding licensing and authorisation. Trial Rack Extensions can only be used when you've launched Reason using the Internet verification log-in option, because trial licences can't be transferred to your Ignition Key —so don't plan to do your testing of trial Rack Extensions when you're on the move without Internet access. Rack Extensions you've bought can be transferred to your Ignition Key, and they'll still be available if you opt for Internet verification.

What happens if you try and open a song someone's sent you that includes Rack Extensions you don't own? Reason gives you the option to visit the Rack Extensions shop and download trial versions (or indeed just buy what you're missing), and that'll get you up and running. But you can also opt to open the song anyway, in which case the missing devices are replaced in the rack by place-holders.

One other boring but crucial bit of info: to get at documentation or support for a Rack Extension, don't go looking in Reason's Help menu, or the application folder on your drive. Instead visit the Rack Extension shop once again, find your Rack Extension amongst what's on offer there, click it, and follow the 'Product web site' or 'Product support page' link on the page that opens. Often developers offer a PDF user guide. I made a folder on my desktop to start collecting these...

The currently free Pulsar exists primarily for modulation duties: it consists of two flexible LFOs and an envelope generator.

At the time of Reason 6.5's launch, there were two free Rack Extensions: Propellerhead's Pulsar (free until October 1st 2012) and Softube's Saturation Knob (free until August 14th 2012), so it could be worth acting fast if you haven't already got these. It was also interesting to see what was not in the shop that had already appeared in Propellerhead's promotional material. U-he's Uhbik-A ambience device was notable by its absence. Also in the pipeline are GForce Software's Re-Tron (apparently a Reason version of their M-Tron Pro virtual Mellotron), Rob Papen's Predator synth (collective rubbing of thighs), and Korg's Polysix (which may point to more of Korg's 'Legacy Collection' eventually coming to the RE platform).

What is already available, though? As I write, there's a veritable smorgasbord of gadgets on offer, as you can see in the 'Rack Essentials Rundown' box, and I'll be focusing on many of them in the coming months. But for now, let's look in some more depth at the Propellerhead freebie, Pulsar.

Using Pulsar to create a tremolo effect for a guitar sound.

Pulsar is a comparatively weird device with some unexpected capabilities, and it naturally partners with the likes of the Matrix Pattern Sequencer as a dedicated, stand-alone modulator. For the most part you 'hear' it purely in what it's doing to other devices, although, as we'll see next month, it's capable of generating sounds of its own too.

So what exactly is Pulsar? The short answer is: two LFOs and a simple envelope generator in a box. It generates CV signals, so you patch its outputs to the parameter CV inputs of other devices any time you want some movement or 'wobble'. You won't be using it every day, because all of Reason's synths and many of its effect devices have onboard LFOs of their own, and those should remain your first port of call for bread-and-butter modulation duties. But you will use Pulsar for other duties, to modulate parameters outside the scope of devices' onboard LFOs, when you've run out of onboard LFOs, and when you want some unusual shapes of wobble! Here's one example to illustrate the possibilities.

In the screenshot of the Pulsar back panel elsewhere in this article, I've hooked up LFO 1's CV output to modulate the level of a guitar track's Audio Track device. The result is tremolo — a regular pulsing of the guitar's volume. LFO 1's Rate controls the speed of the pulsing, and Level controls the depth. Job done, and not a synth in sight!

However, if I'm feeling experimental I could try clicking through Pulsar's 9 LFO waveforms, and sync them to my song tempo with the Tempo Sync option. Suddenly the simple tremolo becomes a bit more groove-like. The action of the Phase knob is particularly noticeable when Tempo Sync is engaged: it causes the LFO waveform to 'start' in a different place in its cycle. Raising the Lag knob gradually smooths out the more square, abrupt LFO waveforms. The Shuffle knob causes the rate of two adjacent LFO cycles to differ, so you end up with 'swung' or 'dotted' patterns.

For even more complexity, try modulating LFO 1 with LFO 2. Turn on LFO 2 and set its Rate really slow — perhaps 0.1Hz (one oscillation every 10 seconds) — then slightly raise the Rate control that's sitting between the two LFOs. Putting on my nerdy hat for a moment, that should really be labelled 'Rate modulation amount'. This causes LFO 1's Rate to constantly change, controlled by LFO 2's 10-second cycle. The exact setting can give you anything from subtle to psychedelic.