Use Logic's plug-ins to digitally recreate a classic analogue sound.

Of all the great Beatles songs out there, I've always been attracted towards their more psychedelic-sounding pieces, such as 'Tomorrow Never Knows', 'Magical Mystery Tour' and the epic 'A Day In The Life'. At the time, I was fascinated by the other-worldly vocal sound that they managed to achieve, when pretty much every other record was graced by just a smattering of vocal plate reverb or tape echo. On some tracks, the Beatles even had their voices processed through a Leslie rotary speaker cabinet.

It all seemed like magic at the time, though with today's overwhelming armoury of plug-ins these types of vocal effect are pretty easy to recreate. Just as an experiment, I tried to emulate the vocal treatment from 'A Day In The Life' using only Logic's stock plug-ins, and found I could get pretty close. 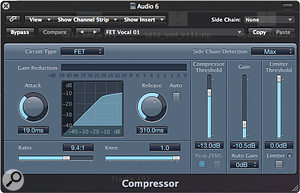 The compressor used isn't as important as how it's used: the ratio causes it to behave almost like a limiter. 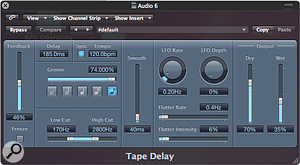 It's just about possible to achieve John Lennon's vocal sound on 'A Day In The Life' with Logic's bundled plug-ins alone. Here you can see the settings we've used on our Tape Delay and Channel EQ plug-ins. The delay of 185ms adds a hint of flutter, and we've applied some fairly radical EQ. 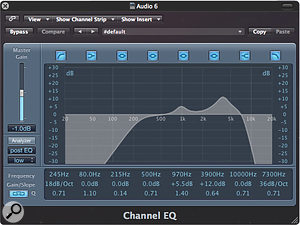 The actual type of vocal compressor used here is less important than the amount of compression applied. In my experiment, I used up to around 10dB of gain reduction on the peaks, just to keep the vocals sitting solidly in the mix. I set a ratio of almost 10:1, so the action is more like a limiter than a compressor, as that's how many 1960s compressors behaved. More important is the combination of effects and EQ used on John Lennon's distinctive vocal sound.

Life In The Delay

On 'A Day In The Life', what at first sounds a little like a slap-back echo is actually a tape delay with repeats, most probably set up using the natural delay between the record head and playback head of a spare two-track or mono tape machine. The record input would typically be fed from an aux send and the replay signal taken from the replay head and returned to the desk via a spare channel. Some of the signal could be sent back to the recorder's input via the channel's send control to produce a little feedback, hence the multiple repeats. Given the model of tape machine, the tape speed setting used, and a sworn affidavit that it hadn't been fitted with varispeed, it would be possible to work out the exact delay time.

Here we can see the order in which the effects have been used: Compressor, Tape Delay, Reverb and EQ.However, I took the more pragmatic approach of trying to match the delay time by ear, using Logic's mono Tape Delay plug-in inserted directly into the track, rather than fed from a send. I ended up with a setting of 185ms but added the slightest hint of flutter to introduce some tape-speed instability. Setting the delay level to around half the dry level seemed to give the best subjective result.

I also adjusted the feedback by ear until the effect was as close to the original as I could get it, eventually settling on 46 percent. On the record, the delays also have a smooth, rounded sound, which suggests that some high-cut EQ was used, so I rolled off the highs at around 2.8kHz and also trimmed the lows below 170Hz, to avoid muddiness.

A small amount of generic plate reverb added the density that an EMT plate would have contributed to the overall sound: not too much, but just enough to blur the tape-echo repeats slightly. Logic Express users could use PlatinumVerb for this, though I chose to use Space Designer with the Soft Plate IR and 93ms of pre-delay. Again, this was inserted directly into the channel signal path to keep things simple, but on systems with less power, you could share a global plate-style reverb set up on a bus via a channel aux send.

The 'far away' quality of the voice is due to a combination of the above delay/reverb effect and some fairly radical EQ. The EQ used is based on the idea of 'bracketing' the vocal using high- and low-cut filters — not to the extent that you end up with a telephone voice, but leaning well in that direction. I set up the high- and low-cut filter in the Logic channel EQ to 7.3kHz (at a steep 36dB/octave) and 245Hz (at 18dB/octave). I also added a couple of little bumps in the mid-range, centred at just below 1kHz and just below 4kHz, to improve the vocal clarity, and also to reinforce the slightly nasal quality of the sound. These would need to be tweaked to suit the character of the voice being processed, of course. You can also further lower the top-cut frequency if things still sound too bright. I used the plug-ins in the order Compressor, Tape Delay, Reverb, EQ, although other arrangements can also produce good results.

Sadly, none of the above advice will help you sing like Mr Lennon, but even in today's music, this type of treatment can be used to dramatic effect to highlight a specific section of a song, or even as the basis for a complete piece.