Reaper's ReaGate has hidden talents that make it much more than a simple noise‑reduction facility.

In my view, a lot of DAW users unduly neglect the humble gate at mixdown, dismissing it as merely an outmoded noise‑reduction utility. This is a shame, because ReaGate, in particular, does so much more besides this that I usually have several instances going on every mix I do. So in this article I want to give a few examples of this plug‑in's hidden talents. There's not space here to cover the basics of gating, so if you're new to it, check out the article back in SOS April 2001: it's free to view in the SOS article archive at /sos/apr01/articles/advanced.asp. Assuming, then, that you understand how the Threshold, Attack, Release, Hold and Range controls of a gate can be used to remove noise and spill in a recording, the only thing to clarify in the first instance is that, although ReaGate appears to have no Range control, you can still implement limited‑range gating using its Wet and Dry sliders.

The first thing that sets ReaGate apart from many other gates is the Pre‑open control, which causes ReaGate to respond earlier than it would normally. 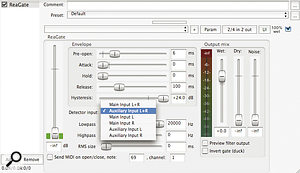 The secret to ReaGate's most useful mix applications lies in its ability to select an external side-chain input, which you can see here. Other features that make ReaGate stand out from the crowd are the positive values available on the Hysteresis control and the Pre-open parameter, which provides a 'lookahead' function — great for preserving the attack of close-miked drums even when there's lots of unwanted spill.This is great for reducing spill on snare‑drum close mics, because it lets you set a high threshold to avoid the spill without the risk of the gate opening late and clipping off the drum's initial transient.

The Hysteresis control is also great, because it effectively creates independent threshold levels for opening and closing the gate. A negative setting here lowers the closing threshold relative to the opening threshold, and is a well‑known method of combating sporadic bursts of opening/closing (often called 'chattering') when a signal hovers around a fast‑attack gate's threshold level. However, ReaGate is very unusual in that it offers positive Hysteresis settings too, and if you max out the Hysteresis slider you effectively turn the gate into a triggered envelope generator, which can be very useful in certain scenarios. For example, an old mixing trick is to set up a gate as a send‑return effect, fed from the kick drum, and then to set it up to create a little 10‑20 ms 'blip'. Adding this to the mix increases the drum's attack, and you can easily adjust the frequency content of that attack by EQ'ing the ReaGate channel. However, if your kick drum has any level variation in it (as live parts certainly will), you'll get undesirable variations in the length of the 'blip', and therefore the nature of the added attack. Add positive Hysteresis, however, and the added attack becomes completely consistent.

What really gives ReaGate its power, though, is the control it gives you over the signal that's sent to its internal level detector (or 'side‑chain'). For a start, the built‑in filters can quickly remove kick and hi‑hat spill from the side‑chain when you're gating a snare close‑mic recording, improving the triggering reliability. It's easier to hear what you're doing if you click the Preview Filter Output button to audition the side‑chain on its own. However, if these filters aren't man enough for the job, you can use ReaEQ instead.

First select Auxiliary Input L+R from ReaGate's Detector Input drop‑down, and then insert an instance of ReaEQ above ReaGate in the effects window. Click ReaEQ's routing button (labelled '2 in 2 out'). Now click the little plus sign in the routing window to increase the number of Track Channels, and then change the plug‑in's output setting from 1+2 to 3+4. 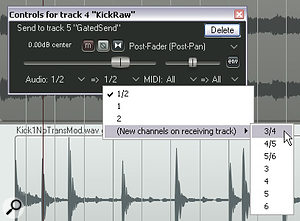 You can route a send to ReaGate's external side‑chain input by sending it to Track Channels 3+4.

Nice though all these things are, the most useful application of ReaGate for me is in automated mix balancing. Let me explain. Imagine you have a drum overheads recording where the cymbals are overpowering the snare. Most people's first instinct is to rebalance this by using the snare's close mic, but that mic usually just goes 'donk', rather than sounding like a real snare drum. A better solution is to boost the level of the overheads during each snare hit, giving you more of the natural sound of the snare in the room.

The way to do this is to insert ReaGate into the overheads channel and then feed its side chain from the snare close‑mic. Switch ReaGate's Detector Input to 'Auxiliary Input L+R', and then drag the snare track's IO button to the overheads track to create the required send. When the little send controls window pops up, take the opportunity to do two things:

Now adjust the ReaGate controls to try to get a reliable burst of overheads signal occurring on each snare hit. Once you've achieved that, pull the Wet slider right down and set the dry signal to 0dB, so that the gate is doing precisely nothing. From this starting point, slowly inch up the Wet slider during playback until you get a better snare level in the balance. Bear in mind, though, that there's only so far you can usually go with this dodge before the gating begins to sound unnatural (above about 6dB, usually), and you may also need to work a little with the ReaGate Release control to get the most musical‑sounding snare decay.

An extension of this auto‑balancing idea is made available by the 'Invert Gate' tick box under ReaGate's Wet slider. What this does is polarity-invert the wet signal relative to the dry signal, so that they phase-cancel whenever the gate is open. The practical result is to turn the gate into a ducker, a processor that is rare in software form but extremely useful at mixdown.

The unassuming little 'Invert Gate' tick box converts ReaGate into a ducker, which is another very useful, and frequently underestimated, mix processor.

The classic application for ducking is clearing space in a guitar‑heavy mix for the lead vocals; it makes the singing clearer by turning down the guitars during vocal phrases. You set it up almost exactly as in the previous snare example:

If you want to know how much you're ducking, check the Range table. Again, you can usually only push this effect so far before it sounds unnatural, but that's not too much of a bind, as even a decibel or two of ducking can still make a considerable difference to the vocal sound.

For audio demonstrations of these techniques, go to /sos/may11/articles/reaperaudio.htm.

It's easy to generate MIDI notes from a drum part using ReaGate's Send MIDI On Open/Close option, whereupon you can use the simple ReaSamplOmatic sample player to trigger a replacement sound. 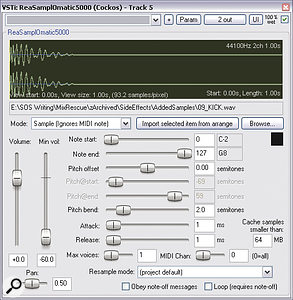 Although there are now many sophisticated software drum replacers available, I have to say that I still end up using ReaGate for this most of the time. All you have to do is tick 'Send MIDI on Open/Close', and the plug‑in will squirt out a user‑specified MIDI note whenever the gate opens. Follow ReaGate with ReaSamplOmatic5000: for quick results in ReaSamplOmatic5000, load in a sample (from the Browse button), select 'Sample' in the Mode drop‑down menu, and untick the 'Obey Note‑off Messages' option. Admittedly, ReaGate doesn't provide any fancy MIDI velocity options, but I rarely miss those in practice, and what ReaGate does offer is masses of features aimed at making its triggering reliable, which I find much more important in most situations.