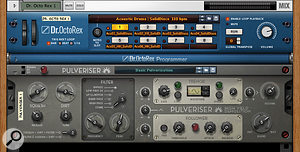 One of Reason 6's new effects devices, Pulveriser is more than just a character compressor — it can be used for a wide range of sonic treatments.

There's still plenty to get our heads round in Reason 6, so this month we're going to have a look at two completely different aspects of the new program. Firstly, we'll examine the new Pulveriser effect and then we'll go on to explore what version 6 can do with time‑stretched audio.

A Handful Of Dust

Pulveriser is one of Reason 6's new effect devices, and with a name like that you might imagine some sort of brutal distortion unit, especially as the subtitle or tag‑line is 'high yield demolition'. But hang on a minute — hasn't Reason already got one of those, in the shape of the Scream 4 Sound Destruction unit? Absolutely right, and in fact Pulveriser is actually a more subtle and flexible tool than you might at first think. What it offers is characterful single‑band compression (Squash), old‑school valve‑type distortion (Dirt) and a multi‑mode Filter with cutoff (Frequency) and resonance (Peak) controls. Used by themselves, these get you a long way. But there are modulation options too, as we'll see.

Try this for starters: load up a loop or two in a Dr OctoRex and hit Run. Right‑click on Dr OctoRex and choose Effects > Pulveriser Demolition to patch in the new effect device. Immediately there should be a whole lot more attitude! The default patch combines some Squash compression with a bit of Dirt distortion, and nothing more. You can quickly tweak the effect by adjusting the Squash and Dirt amounts, and also Dirt's accompanying Tone control. On more dynamic loops, the Release control will also come into its own — experiment with it to really get things pumping — but it'll make little difference if your loop maintains a uniform level throughout.

The next crucial feature is the Blend control. This is a wet/dry mix. We're not used to seeing those on compressors and distortion units, but it's a brilliant feature. When using Pulveriser to treat drum loops or patterns from Kong or Redrum, this lets you blend the crisp original audio with the squashed and dirtied contribution from Pulveriser. Simply adjust to taste. It's effectively a simple version of parallel compression. This is a real power‑user's technique, often mentioned in SOS producer/engineer interviews, which is frequently used to fatten up drums without destroying their original character.

If you only every used Pulveriser's Squash, Dirt and Blend, you'd already be getting your money's worth. But there's more to it, and the remaining sections are a tweaker's delight.

The filter section is like a synth's multi‑mode filter. Select the Low‑pass 24 or LP12 + Notch modes, turn down the Frequency knob a bit, keep Peak turned down, and the result is even more lo‑fi, progressively numbing the signal's high-frequency content. The Comb mode adds flanger‑like overtones to the signal, and turning up the Peak control adds weird robotic tones.

Tremor and Follower settings for a combined auto‑wah and tremolo effect, as described in the main text.

The remaining sections — Tremor and Follower — are modulation sources. They're capable of producing more different effects than I can describe here, but here's one example that demonstrates what's possible.

Try applying a Pulveriser to an electric piano or clavinet sound. For now, turn Squash and Dirt right down. Set the Filter to Low‑pass 24, the Frequency knob to about the 12 o'clock position, and Peak to about 2 o'clock. The result so far is a more muted, slightly twangy version of the original sound, but it gets a lot more interesting when we introduce the modulators...

Follower measures the level of the input to Pulveriser, and generates a corresponding modulation amount, which can be applied to the filter frequency parameter using the knob to its left. Try raising that knob to about the 1 o'clock position. Make sure the Threshold control is right down, and raise Release to about halfway. The effect is auto‑wah — as you play, the filter now tracks the volume of your performance.

Now, how about some authentic electric piano tremolo? For this we need the Tremor section, which is an LFO, pure and simple, with nine waveforms. Select the square wave using the up and down buttons, and set the rate control to about the 10 o'clock position. You'll notice from the knobs either side of the Tremor section that it can modulate the Filter or Volume control, or both. For tremolo, you need to control the volume, so raise the right‑hand knob to about the 2 o'clock position. The result is tremolo, but it's clicky. You need to soften the edges of the square wave, and that's what the Lag parameter is for. As you raise it, the Tremor waveform becomes more and more 'rounded'. There's another option too: if you press the Spread button, the tremolo effect is split between Pulveriser's two output channels, and the effect becomes auto‑pan.

The more you experiment with Pulveriser, the more you realise how versatile it is. Happy pulverising!

Audio clips can be time‑stretched manually by dragging their resize handles while holding down a modifier key.

Reason 6 doesn't have the Melodyne‑like 'elastic' audio that some other DAWs offer, but it does offer more in this general area than previous versions did. Let's look at one really common scenario where this can come into its own: importing audio loops.

For an application that is so modern and progressive in other ways, Reason has surprisingly poor support for audio loops. You can, of course, load sliced REX‑format loops into Dr OctoRex, either from the Factory Soundbank, commercial ReFills, or those that you've created yourself in ReCycle. But beyond that, the only audio formats Reason will deal with are plain old WAV and AIFF files. So let's say you've got a loop in one of those formats that you want to time-stretch to use in a song. Here's a good way forward:

2. In the file browser that appears, navigate to where your loop is stored. You should be able to preview audio using the Audition section's Play button, to make sure you've selected the right thing. Reason will also confirm some technical details about the file.

3. Click Open. Reason will dismiss the file browser and place the loop into your sequence. If you've already selected an audio track (with the correct channel configuration), the loop is inserted in it at the playback wiper position. If not, Reason will create a new track for you.

As the vast majority of WAV and AIFF loops don't have tempo metadata embedded, the likelihood is that the imported loop won't match your sequence tempo. So try this:

The clip parameters at the top of the sequencer section are invaluable for setting clip length, position and transposition.

4. Make sure your loop begins exactly on beat 1 of a bar. If it doesn't, the quickest way to remedy that is to first select it, then use the Position text field at the top of the sequencer to type in a location directly. For example, typing in 3. 1. 1. 0 moves the loop to Bar 3, Beat 1, 1/16th 1, subdivision 0.

5. In the sequencer, turn on Snap and set the resolution to Bar.

6. Select the audio clip, then hover your mouse pointer over the right‑hand clip resize handle. Now hold down the Alt key (Mac) or Ctrl key (Windows) — the mouse pointer changes to a 'scale tempo' icon — and drag the clip. The length will snap accurately to bar divisions. You're aiming to make the clip best match your sequence, and most likely it'll be one, two, four or eight bars long. Listen to the results, experiment a bit and see what works best.

7. When you've nailed the length of your loop, you can easily repeat it to form the basis of a backing track. Just select it, and hit Command‑C (Mac) or Ctrl‑C (Windows) to copy it. The playback wiper helpfully jumps to the end of the loop. Then use Command‑V (Mac) or Ctrl‑V (Windows) to paste it as many times as you need.

The reason this all works so well is because of Reason's superb real‑time time‑stretching capabilities on playback. You can now vary your sequence tempo to whatever you need, and the loop will continue to 'conform' to your sequencer time ruler, as it remembers its length in bars and beats.

There's one thing to check, though, or to experiment with. The quality of time‑stretching is controlled on a per‑track basis and it's set in an audio track's corresponding Audio Track device in the Rack. That's easy to find: just click the sequencer track in an empty part of its settings section at the left side of the sequencer, and the rack scrolls to show its rack device and flashes it for good measure. You need to be able to see the rack for that to work, of course. Then check out the Stretch Type pop‑up menu. The Allround setting works well for most things, but Melody and Vocal can give a different effect, and might be a better choice for sustained textures.