Last month's Reaper column looked at creating convincing convolution reverb, using the comprehensive processing capabilities offered by the ReaVerb plug-in. This month, we'll investigate tools within ReaVerb that allow you to capture your own impulse responses of reverberant spaces on location, as well as some further creative possibilities offered by the Impulse Generation section of the plug-in.

Prior to recording an impulse response on location, you'll need to set up an appropriate project-file template in Reaper. This prepares the test (or 'excitation') signal for playback in the acoustic environment and the subsequent recording of the impulse response.

The project file is then prepared for impulse response recording using the second and third audio track:

After the first impulse response is recorded, subsequent alternative responses can be recorded using the same test signal. The simplest way to do this is to create a new audio track for each response, name it accordingly and then record. Naturally, when using this method you need to take care to mute all other tracks containing recorded impulse responses. 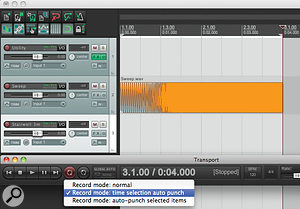 This is the impulse-response project template ready to go. Carefully placed locators surround the test tone, the auto-punch record mode is enabled and the third track is named to appropriately reflect the acoustic space being measured.

Although a formalised series of ISO regulations exists for the measurement of impulse responses, it is most likely that recording engineers will employ an active studio monitor to reproduce the test signal, with omnidirectional condenser microphones situated at a sufficient distance to capture the acoustic response. A spaced (A-B) pair of omnis performs strongly in this application to achieve a sense of immersion and stereo-field spatialisation. If omnidirectional microphones are not available, a coincident pair of cardioids in X-Y or ORTF formation will suffice as an alternative, but might need to be placed further away to capture enough ambience.

A laptop computer and a bus-powered audio interface providing phantom power are also essential parts of your armoury, minimising the requirement for power sources at opposite ends of a large space.

Experimentation, as ever, is the key to unlocking interesting reverb effects. You may consider capturing a number of responses in each acoustic setting with varying distances between microphone and speaker, making changes to their relative heights and tilting the speaker to emphasise specific reflections and resonances. Environments such as reflective stairwells provide interesting, resonant reverb effects for instruments such as snare and guitar, and the process represents a modern-day equivalent to genuine chamber reverb without resorting to any digital modelling. For further ideas on technique, refer back to the Creative Convolution article from September 2010, available online at /sos/sep10/articles/convolution.htm. 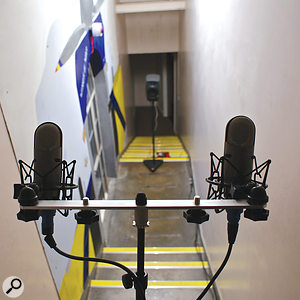 A spaced pair of omnidirectional microphones recording an impulse response in a large, narrow stairwell. An active speaker is used to emit the test tone from a lower position. The response was recorded at different distances and with the microphone and speaker positions switched around.

Maintaining a healthy signal-to-noise ratio throughout the process is crucial. The excitation signal should be played at a strong level through the speaker — use ear protection! — with care taken to eradicate rattles that might occur due to the speaker having to reproduce very low frequencies, or a lack of isolation between the speaker and its stand. Lightweight speaker stands may need to be damped by ad-hoc remedies such as draping with (excess) clothing, sandbags at the base and masking tape over the fixings to eradicate undesirable vibrations. Microphone preamps should be set to a reasonably high level of gain, with care taken to avoid the noise associated with maximum levels. Most important, though, is ensuring a quiet environment when recording responses. This often involves being patient and triggering sweeps between spells of external traffic and bird noise and getting those around you to remain silent for the duration of the sweep, part of which will often not be immediately audible. For these reasons, many elect to go out and collect responses alone and under the relatively silent cover of nightfall...

The final stage of the impulse-response recording process is to deconvolve the sine wave from the recording made in the acoustic space. This clever mathematical process removes the sine wave from the impulse response and then ensures that all the reflections are compressed into an appropriate time frame, giving an accurate representation of the reverb time and tonal response of the space. Thankfully, the ReaVerb plug-in takes care of this involved number crunching on your behalf:

The finished impulse-response file can be freely loaded into the ReaVerb plug-in to yield original and interesting reverb effects in productions, with further creativity afforded by the range of impulse-response manipulation processes explored in these articles. Read Part 1.

There's more on the techniques discussed here in the expanded online article. Check it out at /sos/jan12/articles/reaper_notes_0112.htm.

Carrying on from last month's exploration of the impulse generation section within ReaVerb, there are two further processes that may be of interest to those striving for original reverb effects.

The first is the reverse function, which does exactly what you would expect. Before creating a reverse reverb it is wise to employ the processing tools offered by 'Trim/Gain/Stretch' to limit the length of or compress longer impulse responses. This adjustment helps to create a more effective, immediate reverse reverb effect may otherwise be confusing to implement if the impulse response has already been reversed! Picture 5 shows the time-limited, reversed impulse response waveform in the plug-in display window. 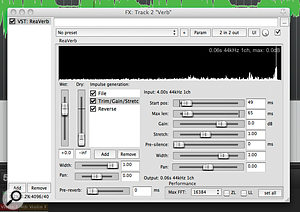 This image shows the effect of the Reverse function introduced using the Impulse Generation section of the plug-in. Here, the Start Position and Max Length parameters within 'Trim/Gain/Stretch' are being used to provide a more immediate and noticeable reverse reverb.

The second process is a form of digital synthesis that can be used to generate additional early reflections at the beginning of an impulse response. These additional reflections can add to the initial brightness and subtly change the character of the reverb. Click the Add button in the Impulse Generation section and select Echo Generator.

Picture 6 depicts the Echo Generator being used to create a series of early reflections and, for visual clarity, the underlying impulse response file has been removed. For highly original reverb effects you may wish to experiment with more extreme settings using the Length and Spacing controls. 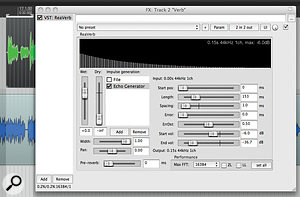 Synthesising early reflections using the Echo Generator function. The reflections shown on the plug-in display window occur in the first 0.15 seconds of the impulse response and may be superimposed on top of a recorded impulse response when one is loaded in the File section.

Whilst preparing this article, a slight anomaly in the deconvolution process was recognised. ReaVerb does not ask the user to specify the test signal to be deconvolved each time the process is performed, and so must retain some form of cached data relating to the sine sweep audio file. Far from making this easier for the user, this often results in the test signal not being located, a sudden halt to the process and ensuing head scratching. The following workaround is relatively trivial and ensures that a series of impulse responses may be successfully deconvolved without errors being reported by the software:

The simplest methods for measuring impulse responses include the use of popped balloons and starting pistols as impulses to excite the acoustic reflections within a room. For this method, the excitation signal is simply cut from the start of the audio file to reveal the finished impulse response. However, with limited frequency response and problems with repeatability, these techniques may represent only an approximation of the acoustic environment.

Other signals produced by non-mechanical means were developed to address the problems associated with balloon pops and pistols, and these include extremely short bursts of noise that represent the widest possible frequency range. Research has shown that, whilst such signals are useful in relatively noisy environments, impulse responses recorded using this technique may suffer from distortion peaks.

It was later discovered that a sine wave, sweeping progressively over the entire frequency range could be used as an excitation signal to produce impulse responses with a superior signal-to-noise ratio, free of any unwanted artefacts. Given these distinct advantages, plug-ins and dedicated software for impulse response measurement tend to utilise the sine sweep method for the room excitation signal. They offer a choice of durations for the sweep — often up to 50 seconds — to allow for ultra high-resolution impulse capture.