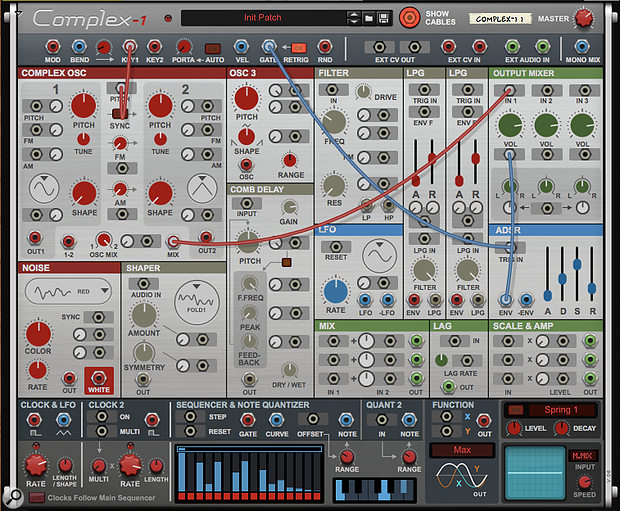 Screen 1: The Init Patch comes with some basic connections in place.

Propellerhead's new instrument is a modular within your modular.

In December Propellerhead unveiled their latest creation: a fully modular synth Rack Extension, available as an £89$99 add-on for Reason 10. Complex‑1 is an absolute beast. It's a true modular synth with a ton of possibilities, and a big headline feature...

Yes, Reason is the software that pioneered the virtual patch cable, but the cables have always been tucked away on the rear panel. With the surge of interest in modulars and Eurorack, we apparently love our cables front and centre. The semi-modular Thor synth introduced a routing and modulation matrix to patch and scale connections on the synth's front panel. This went on to be used on the Europa, Grain and Parsec synths. Complex‑1 instead opts for a complete simulation of physical patching, which is more visual, promotes experimentation, and is a lot more fun.

Patching is implemented entirely within the Complex‑1 Rack Extension's own user interface: this is not a wider change in Reason. You can't directly connect Complex‑1's front-facing patch points to other devices in the Rack. However, two CV and two audio ports are looped through from the front to back panels, giving you a conduit to the wider Rack environment. Just two externals is pretty limiting when you want Complex‑1 to interact with other devices, but the fact is it can do an awful lot on its own.

Complex‑1 offers a lot of modules, covering some broad territory. The design hints at a Buchla influence, and certainly there are low-pass gates and a wave shaper that bring 'West Coast' synthesis flavours to Reason. However, it's a hybrid approach, with a more familiar low-/high-pass filter and ADSR envelope on hand.

The architecture is fully modular. If you're familiar with modulars you'll feel right at home; everything behaves as you'd expect a real-world modular to behave. If you're less experienced with this kind of synth it's easy to get started, as Complex‑1 always loads up with a preset, and there are plenty of ready-made sounds to explore in the library.

Even the Init Patch (recalled when you reset the device) comes with a few connections that mean you'll get sound if you play notes (see Screen 1 above). In the default view mode you don't actually see the patch connections unless you click and hold on a jack connection. The knobs and sliders are rendered in 3D, and patch points show any connected signal sources as text labels. If you click the Show Cables button in Complex‑1's header strip all the jack points and cables spring into view, and the panel controls flatten into the background.

The Init Patch is a good place to look at the basic operation of Complex‑1. At the very top of the panel are the synth's connections to the outside world, starting with a bank of MIDI to CV converters. Note and wheel data from your keyboard or other rack devices emerge here as CVs that you can connect to the modules. The right-hand connections are the two CV and audio links to the rear panel, and a mono mix output that's purely for feeding back into the panel.

The Init Patch is a conventional subtractive synth patch. The main Key1 (note) source is connected to the Pitch input of the main oscillator pair. The Mix output from the Osc module goes to input 1 on the Output Mixer. The Mixer's input channels act as the VCAs in Complex‑1. In the Init Patch, Channel 1's volume is modulated by the ADSR envelope, which is triggered from the main Gate input. The Mixer outputs a stereo signal to the on-board effects module (bottom right of the panel), which then goes to the Master Out on the rear.

Complex‑1's primary sound module has two identical oscillators that share a Pitch input but are otherwise independent. They have three base shapes, whose symmetry can be adjusted with the Shape controls. Triangle morphs to saw, sine becomes smoothed pulse, and square has variable pulse width.

Both oscillators have separate Pitch, FM and AM inputs with attenuators. There's also internal patching for both FM and AM modulation of Osc 2 by Osc 1, with levels that can also be modulated. Finally, the pair can sync. Each oscillator has a direct output, plus there's a variable mix output with CV control, and a further fixed mixed output!

The oscillators sound amazing, easily the smoothest and clearest analogue-style sound sources I've heard in Reason. Even without patching any of the other modules in they produce great results, and it's easy to lose half an hour having fun making them mess with each other.

A third oscillator with variable shape has two Pitch modulation inputs and a variable range. Patching the Key 1 CV to the first Pitch input and setting it to max will let you play Osc 3 across the normal chromatic range and use it alongside the main Osc pair. A Range control can slow this oscillator right down for LFO duties.

Finally, there's a comprehensive noise generator, which again is an amazing module in its own right. It offers a fixed white‑noise source plus a multi-mode output with seven different types of noise and random sources. Try patching your key/MIDI note source to the Colour CV input and choosing the Binary or Buffer noise modes to get a bonus pitched oscillator.

The typical next step in our Init Patch would be to route the oscillators through the filter, and perhaps modulate this with the ADSR module. However, let's take a different route. Screen 2 shows a rudimentary 'West Coast' style patch. The oscillator is getting a harmonic boost through a wave folder, then going into a low‑pass gate. 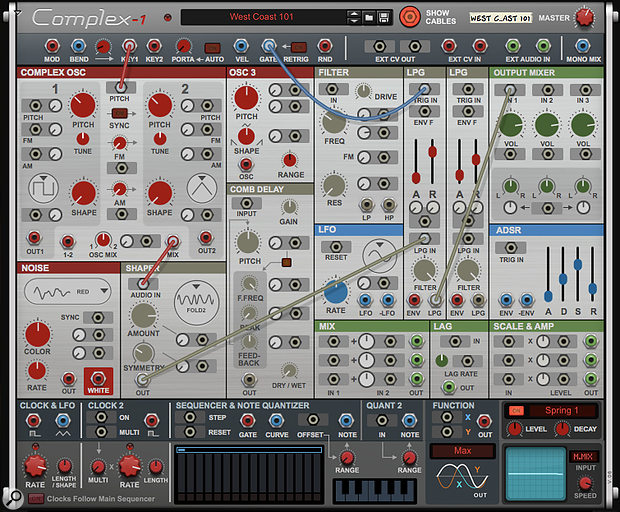 The simplest way to look at a low‑pass gate is as a filter that you can use like a VCA. The filter's default state is a low frequency, effectively blocking audio from passing through. The filter can then be opened using an envelope. Low‑pass gates thus acts like a VCA, with dynamic filtering characteristics. They're particularly effective for snappy, percussive sounds.

The LPG modules in Reason have an envelope generator built in, so you can make a playable patch with just an oscillator and an LPG. The envelope is a simple two‑stage attack/release affair. It has a mod input which can be applied to either stage by degrees. Try patching Velocity to the Release for example. Notice that there's also an Env output so you can use the envelope elsewhere.

It's also possible to control the LPGs via the envelope module, sequencer or any other source in Complex‑1, be it CV or audio. Simply plug into the Env F input. You can do this instead of, or in addition to, the Trig input. Another noteworthy feature of the LPGs is that you can reduce the amount of filtering right down to none. With this and the Env F input, the LPGs in fact function like standard VCA modules!

Complex‑1 has its own 16‑step sequencer. Like a traditional modular sequencer this works with continuous CV rather than notes (think the Reason Matrix sequencer in Curve mode). The Step input moves the sequencer on a step, producing a gate and CV output. Reset sets the sequence back to step 1. Typically the Sequencer would be driven by connecting a clock to the Step input, but any gate, CV or audio signal can be used for different results. 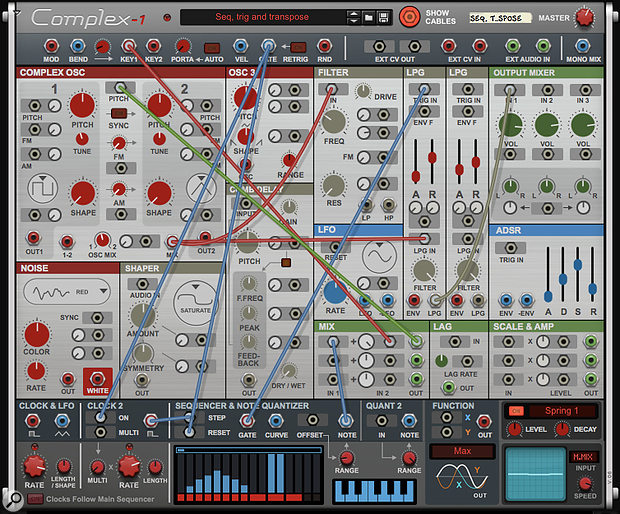 The sequencer has a built-in Quantizer, and there's an independent Quantizer alongside. These snap CV signals to musical note values, allowing you to turn sequencer curves, or any other modulation, into melodic outputs. The small keyboard graphic lets you limit which notes are used. The sequencer's in‑line Quantizer has an Offset input where you can, for example, connect the Key note input to transpose a sequence from MIDI notes. Note, however, that you'll need to set the Range to maximum for this to scale chromatically.

Screen 3 shows the Seq Trig & Transpose patch from the factory templates folder. It shows one way you can use the sequencer to play musical patterns. Clock 2 is driving the sequencer, and a gate from the MIDI input is being used to turn the clock on, so the sequencer only plays while a note is held. The sequencer's quantised note output is combined with the main Key note input and sent to the Osc Pitch input. This is being done using the Mix module, which is a super versatile section that can mix both CV and audio signals, or work as a general‑purpose attenuvertor.

We've barely scratched the surface here, and there are modules in this new Rack Extension we've not even looked at. I'd highly recommend adding it to your Rack and exploring further.