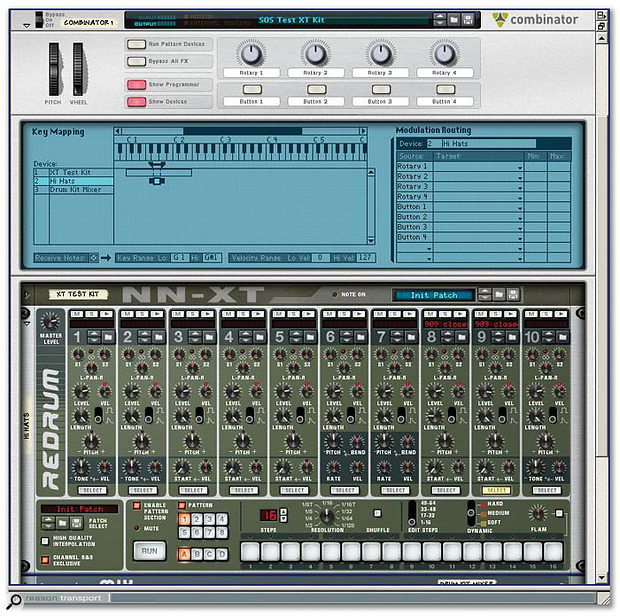 A quick Combi patch approach to exclusive hi-hat samples that complement an NNXT drum kit. The sheer on-screen size of Reason's devices doesn't allow us to show you the full image.

We report on a new release of Reason that fixes some bugs but also ups the system requirements for running the software, and examine the problem of achieving 'exclusive' drum assignments in the NNXT super sample-player.

In general, new releases of Reason are not beset by bugs and 'unfinishedness' in quite the same way as some other software. But, as bad luck would have it, a number of issues were spotted following the launch of the major rebuild that was version 3.0. Some of the problems that surfaced were a little obscure and didn't affect all users; nevertheless, Propellerheads were straight on the case, developing fixes and pushing an update through beta-testing (once again, undertaken with the help of the user base). The result is version 3.0.3, which is available for download now. This release was apparently preceded by v3.0.2 just a few hours earlier, but another bug was discovered and very quickly fixed!

If you've had issues with Keyboard Control causing Reason to crash, strange pattern-change automation behaviour, 'Bad Format' warnings with NNXT patch or song names containing exotic characters, odd loud noises at the end of a loop during loop playback, or unusual parameter-change behaviour, this update is essential. A range of other niggly issues, documented on Propellerhead's web site, are also resolved.

The update doesn't just bug-fix: direct remote support has been added for M-Audio's Ozonic controller keyboard and Frontier Design Group's Tranzport wireless controller, and sequencer track mute and solo buttons can now be controllable via the Remote protocol. In addition, the team have taken the opportunity to tighten up the program. Overall performance has been improved and sample loading has been further optimised so that everything runs a little more quickly.

A word of warning, though: v3.0.3 Song files probably won't be compatible with Reason 3.0. Anyone working with Refill Packer is advised to download the 3.0.3 update of that software, with a similar proviso: Refills created with the latest version of Refill Packer may not be compatible with Reason 3.0. If you're swapping Songs or Refills with collaborators, make sure everyone's updated.

It's also worth noting that the 3.0.3 update release has seen the system requirements for Reason change. Apple's G3 processor is no longer recommended, and a Pentium 3-equipped PC running at 600MHz is now the minimum, rather than the same processor running at 300MHz. Apparently, the software will run under Mac OS 10.2, but an anomaly that occurs under 10.2.8 makes upgrading to 10.3 or higher highly recommended. Other requirements — such as minimum 256MB RAM and 2GB free hard disk space — remain unchanged. The download is quite big (112MB for Mac and 103MB for PC) so broadband, or a friend so equipped, is preferable. Have your master discs and registration card handy too, for the reinstallation process.

I was posed an interesting question by one of the SOS team recently: how to set up two samples, such as an open and closed h-hat, to operate exclusively within NNXT. Drum voices eight and nine on Redrum have a switch for setting up just this option, precisely to allow the creation of authentic hi-hat patterns, but there's no explicit analogue within NNXT. This strange omission becomes stranger when you think of the opportunities for drum-kit creation within the super sampler.

A simple solution adopted by some Refill developers (including Propellerheads!) is to group the two samples and assign a polyphony value of '1' to the group. This solves the problem of not allowing the two sounds to play simultaneously, and playing the closed hat sound does cut off the open hat. It's a solution that will work in many situations, but the way in which some samples are cut off may be a little too unnatural for others.

There is another solution, of sorts, using v3's Combinator. Create the drum kit you're after, minus hi-hats and any other sets of samples requiring exclusive performance (bongos or other hand drums, for example) in an NNXT lodged in a Combinator. Now add a Redrum and assign closed and open hi-hats to voice slots eight and nine, enabling the exclusive switch.

The trick here is to use the Combinator 's Programmer to set up key ranges so that the main drum kit and the subsidiary samples assigned to the Redrum can be played as if one device. The easiest approach is as follows:

You might think you're losing the ability to velocity-switch between different types of hi-hat sample, but by adding extra Redrum s and also setting their velocity ranges in the Combinator programmer, you can overcome this problem. There will be some loading issues with a patch such as this, and the Combi will be a little unwieldy, especially if you add a couple of Spider Audio devices to submix velocity-switched multiple Redrums. However, the result is a more natural-sounding drum kit, most of which will have all the sound-shaping options at NNXT 's disposal. Just the 'exclusive' samples loaded into the Redrum(s) will be lacking these options, although any effects added in-line with devices in a Combinator effectively become part of the Combi patch.