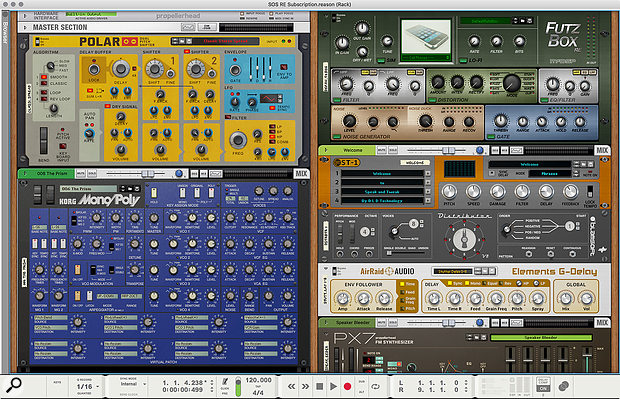 Screen 1. My haul of shiny Rack Extensions in my new Standard Subscription plan. Any can be swapped out later if I want a change.

Subscription payment systems for software are pretty well established now, and they make particular sense for plug-ins and add-ons which you might not need all the time. Propellerheads have launched subscription plans for Rack Extensions, and in true Props style they’ve done it in an original and fun way.

Here’s how it works: there are three price plans which grant you access to different amounts of Rack Extensions, based on the total list price of those devices. There are several pre-made starter packs at the lowest price tier. You can choose one of these and add to it, or build your collection from scratch; you’re completely free to choose which REs you want. You pay for your subscription in 30-day chunks, and there’s no commitment beyond each month. Even better, you can change the REs in your subscription bundle from month to month. Of course you only have use of the REs in Reason while they’re part of your current bundle.

So what’s the catch? Well, for some it could be that subscription REs only use online authorisation, meaning you’ll need an Internet connection whenever you wish to use them. Only REs you purchased outright can be licensed directly to a computer or Ignition Key for offline use. You should also remember that if you cancel your plan you’ll no longer have access to the REs, which might have an implication for opening older songs. Finally, not all REs are available in the Subscription program — it’s up to each developer to decide whether to participate.

Let’s build a subscription plan and see how this works. From the Shop section of the Propellerheads web site click on Subscription (screen 2). If you choose Starter Packs you’ll see a number of themed packs (Mix & Master, Vintage Instruments, etc) that you can immediately subscribe to or Modify. I’ll be surprised if anyone has jumped on one of the pre-rolled options when you can choose exactly what you want. But be warned, clear your schedule... the custom selection process is fun and quite addictive.

Screen 2. The Subscription shop lets you choose from a pre-wrapped bundle or hand pick your own.The starter page lets you click on any of the three price plans, but they all take you to the same place: the, dah dah dah... Subscribe-o-meter. From here you can browse REs and add them to your plan while seeing a running total along the top. If you go over the Medium or Large thresholds you’ll automatically move into one of these plans. Let’s get started!

First priority was to grab some synths, starting with the two Korgs I’ve been coveting for a few years: the Mono/Poly and Polysix. Next the ’80s-style speech synth ST-1 that I loved when I reviewed it a while back. And why not the Props’ own DX-inspired PX7, and Synapse Audio’s Moogy and patchable synth The Legend.

On to some effects: the easy first choice was McDSP’s Futzbox which is one of my go-to plug-ins in other DAWs. I also grabbed the brilliant D16’s Devastator 2, and Kuassa’s Creme, which I think is the best guitar amp simulator available as a Rack Extension. Two effects that I’ve come close to shelling out for on multiple occasions are Softube’s TSAR Reverb and FET Compressor, both of which appear in every music mix I’ve done in Pro Tools for the last few years. Here though I hit a block: Softube have not opted into the program so far. It looks like most developers have signed up, but other than Softube the big names absent are u-He and Sugar Bytes. It’s encouraging though that Korg, Rob Papen, McDSP and GForce are there. To make up for the missing Softube compressor I picked a nice vintage McDSP levelling amp, and I was getting carried away by now so threw Blamsoft’s Distributor (worthy of a whole article) and the Prop’s Polar into the basket. 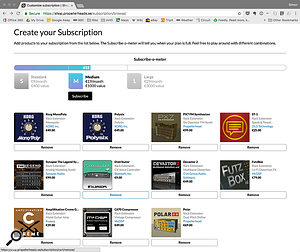 Screen 3. The Subscribe-o-meter is highly addictive, I hope they never make it an app. Here I’ve gone a bit over my planned budget.As you can see in screen 3, by this point the Subscribe-o-meter had soared well into the Medium plan and it was time to get a cup of tea and make a choice. Did I now push on to the €1000 mark, or put some things back? Really, I didn’t want to commit to more than the Standard plan, especially as I’ll be quite busy for a couple of months and probably won’t get much Reason time. This really is the beauty of the scheme. If I want those extras in a couple of months I can just log back in and add them to my plan and my subs will go up automatically. Later I can remove things and drop down to a lower tier.

Probably the most compelling thing though is that you can swap out REs from within your current plan. You can change as many REs as you like, but the restriction is that once you make changes to your pack you must wait 30 days until you can make further changes. Effectively, the minimum time an RE can be in your plan is 30 days. You can go in and tweak your Subscribe-o-meter while in this so-called Exchange Lock period, but changes will be queued until the next period. 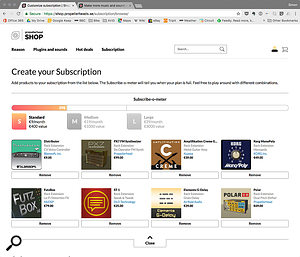 Screen 4. My final picks, including some real crackers I’ve been after for ages.Anyway, back to my pack. I had to make some hard cuts, made easier by knowing that any decision I regretted could be fixed in a month. Out went The Legend, but it will be back for a proper review some time. I also forced myself to pick between the two Korgs, and lost the Devastator and McDSP compressor, pausing to consider my life choices, children, mortgage, etc. At this point I was down to €369 and in need of a stocking filler or two to maximise my bundle value. Luckily there’s plenty of low-cost REs available, although I wished you could sort or filter the Prop Shop by price at this point. In the end I filled the gap with AirRaid Audio’s Element G-Delay. All that remained was to hit the Subscribe button and enter my credit card details. I was then given separate download buttons for each device. The Authorizer app took care of installation and licensing automatically.

There are a lot of good reasons for going this route with Rack Extensions, and of course it doesn’t take away from the existing trial and purchase options. It’s a low-commitment, low-risk way to add REs to your Rack. It also provides a temporary way to get REs that you need or want for a particular mix, song or album. It’s also a great way to access REs you don’t own that are in a song that you’re collaborating on with another Reason user. Subscription divides opinion but I’ve always been in favour, especially when it comes with some added service of benefit. No doubt we’re all wondering whether this will one day extend to Reason itself, but for now this is a real boost for users of Rack Extensions.