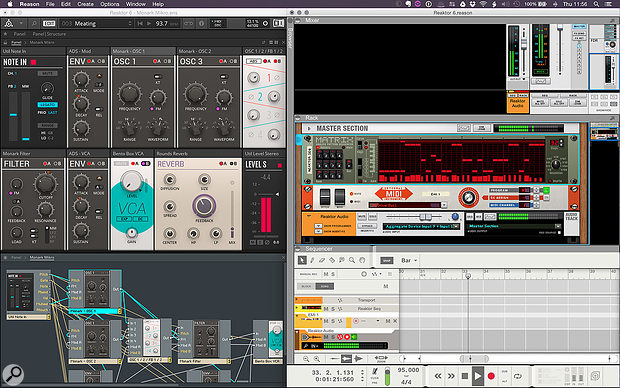 1: Reason running alongside Reaktor 6, with internal MIDI and audio connections.

We show you how to use Reaktor within Reason.

I love that Reason is a self-contained toybox. The basic install has most of what I need, it doesn’t need relentless plug-in and library maintenance, and it’s guaranteed to still open 15-year-old song ideas that I should really have given up on. That said, even with Rack Extensions enriching the ecosystem, there are still other plug-in instruments that I can’t live without and that I sometimes want to use in Reason. In particular Reaktor and other Native Instruments plug-ins have been staples in most of my musical efforts. This month I’ve brought together a bunch of tips for getting started working with these alongside Reason.

What makes the NI instruments great for working with Reason is that, unlike many plug-ins, they can run as stand-alone apps. Alternatively, if you have Komplete, you can use Komplete Kontrol as a shell for running your virtual instruments (see the box). For clarity, let’s stick with one plug-in here: Reaktor. The settings and menus are the same for all the NI plug-ins, as well as Komplete Kontrol and Maschine. (We’ll return to Maschine another time).

There are different levels of integration you can employ when using Reaktor with Reason. You could simply treat Reaktor like a stand-alone instrument and play it directly from your keyboard. In this case you just need to figure out how to get audio from Reaktor into Reason. If you want to record and edit parts in Reason’s MIDI tracks, or sequence Reaktor from other Reason devices, you can route MIDI between Reason and Reaktor. And then there’s all the awesome internal sequencing possibilities in Reaktor, especially in Blocks, which can be enjoyed if you synchronise its clock with Reason.

However deep you go with Reaktor, as a minimum you’ll probably want to record audio from it into Reason, so let’s start there. Audio routing between applications on one computer can either be done externally (going out via an audio interface then back in again), or internally via certain third-party utilities/drivers. Internally it can be more flexible, but is more fiddly and can sometimes incur more latency.

To go the external route you’ll need a spare pair of outputs and inputs on your audio interface. Many interfaces have some digital I/O on board that often never gets used. I have a single AES I/O pair on my interface that I only ever use for routing between Reason and other apps: one cable, nice and neat. Audio output and routing in Reaktor is selected in File / Audio and MIDI Settings. While you’re in the there, set the latency as low as you dare. To monitor and capture the audio from Reaktor you need to create an Audio Track and choose those inputs. Remember to click the green input monitor button.

To route internally you’ll need to install Soundflower on your Mac, or either VB-Audio Virtual Cable or LoopBeAudio on Windows. These all add virtual audio devices to your computer that can pass audio between applications. Reason doesn’t allow you to select different audio devices for input and output, so it takes a bit of thought to be able to route the internal input and still output to your monitors. You need to use an Aggregate driver that combines your hardware interface and the virtual connections. On the Mac this is done by creating an Aggregate Device in the Audio MIDI Setup utility. On Windows this can be handled by ASIO4All. Mac users also have the option to use Soundflowerbed, which can route audio from apps using Soundflower to hardware interfaces.

To control Reaktor directly from Reason, you’ll need to route MIDI to it. On the Mac this is pretty simple using IAC (Inter Application Communication) buses. There’s usually an IAC bus available on Macs by default, called Bus 1. If not (or if you want to make more) open the MacOS Audio MIDI Setup utility, switch to the MIDI device view, then double-click on the IAC Driver icon.

Windows doesn’t have this functionality built in, but you can add it for free with LoopBe1, or for multiple ports try LoopBe30 (or some of you may already use the alternative MIDI Yoke). MIDI inputs need to be switched on in Reaktor in the Audio and MIDI Settings. 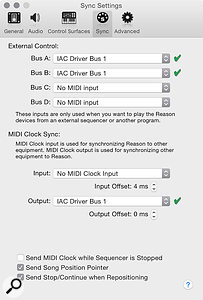 2: MIDI Settings in Reason. Clock is being sent to Reaktor, and MIDI received.

Reason can now treat Reaktor much like a hardware instrument, as in the main screenshot. Create an External MIDI Instrument device, and choose your internal MIDI bus on its front panel. You’ll still need an Audio Track to monitor and record the incoming audio (unlike many DAWs, Reason does not have a combined device or track type for doing this). Make sure that Reaktor is not also getting MIDI directly from your keyboard or you’ll get doubled notes. Now you’re good to go.

If you want to enjoy all the fantastic sequenced synths in Reaktor, and the new Blocks modular constructions (and you do), you’ll need to sync Reason and Reaktor with Beat Clock. In Reason’s Preferences select the Sync tab and set the MIDI Clock Sync output to your internal MIDI bus (screen 2). Then check Options / Sync / Send MIDI Clock. Finally, in Reaktor go to the Settings menu and check Sync to External Clock.

Going The Other Way

If you’ve made it this far you win several beard points and have all the techniques you need to integrate any stand-alone virtual instrument with Reason. Reaktor is of course a lot deeper than most plug-ins, and has further possibilities, such as generating its own sequences and processing external audio signals. Using the same scheme of audio and MIDI routing it’s possible to go in the other direction: ie. sending MIDI from Reaktor to Reason or passing audio signals from Reason to Reaktor. I’ll save the latter for another time when we look at how to incorporate external signal processors with Reason.

To receive MIDI from Reaktor, you need to assign an External Control input in Reason’s Sync Preferences (screen 2). Then at the top of the Rack unfold the Advanced MIDI device, click on Channel 1 and pick the device you want to trigger from Reaktor. In Reaktor’s Audio and MIDI Settings, make sure the internal bus is enabled as an output. 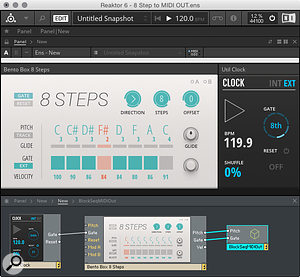 3: A simple Reaktor patch for sequencing Reason from Blocks.Now you’re going to need a Reaktor patch (Ensemble) that has a MIDI output port. There are several Sequencer Ensembles and Instruments in the Reaktor Factory library. At this point we’re getting out of the scope of a humble Reason column. However, if you’re going to explore further, there’s an important thing to know about Reaktor Blocks. Because the new Blocks framework standardises all connections as signals with a value between -1 and +1, pitch/gate sources cannot simply be connected to the standard MIDI out object. Luckily the Reaktor community is always there to step in, and a couple of people have already created Blocks that convert to regular MIDI. Screen 3 shows a simple example using the ‘8 Steps’ block.

I can’t have been the only one to look at Blocks in Reaktor and think, “hmmm it sure would be nice to combine this modular environment with the Reason one”. Using the tricks here for routing MIDI between the two apps, there are many possibilities for complex modular patching. What’s more, using internal routing it’s possible to share audio between devices in Reaktor and Reason; both Blocks and some Reason’s devices and REs (such as Thor) can use audio signals as modulation sources, and vice versa. For example, I’ve successfully sent audio rate signals from Thor’s LFO’s and Step Sequencer to Reaktor Blocks via audio connections.

We’ll return to the subject of combining Reason with analogue synths, and using Audio/CV converters such as the Expert Sleepers Rack Extension another month. In the meantime, happy tweaking.

NI’s Komplete Kontrol is a lightweight virtual instrument host that was developed for use with their lovely S-series controller keyboards, but that can also be installed and used by any Komplete owner. This makes an ideal platform for running non-Rack Extensions VIs alongside Reason, including Reaktor. Originally this was only for NI instruments, but has just been updated to support other VST instruments.

Setting up is just like with Reaktor — the Audio, MIDI and Routing menus are the same. There is one limitation: there’s no concept of a ‘multi’ yet in Komplete Kontrol, so you’ll only be able to use it to run one plug-in at a time. If you want to use another instrument you’ll need to record in the first one. Remember, though, if you’re sequencing from a MIDI track or device in Reason, you can keep this and you’ll be able to go back and make changes if necessary. Alternatively, you can run multiple individual NI plug-ins as stand-alones, but only one instance of each.