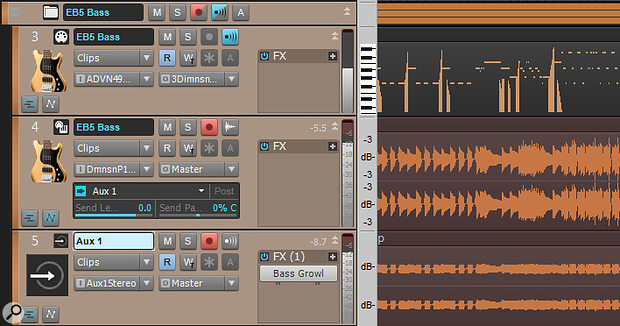 Three tracks in a Track Folder: the MIDI track (top) drives a virtual instrument, whose output was recorded into the middle track. A send feeds the processed sound from the bass-amp sim to an aux track, which has also been recorded (bottom).

The August and October Sonar updates brought some pretty heavy-duty additions, which fall under what Cakewalk call Universal Routing Technology. The object of the current implementation is to be able to route pretty much any audio out to any audio in, which opens up multiple possibilities. It’s kind of like having the patch bay big studios had back in the day, except the contacts don’t corrode.

Patch Points are virtual connections that exist inside Sonar. Although Sonar’s tracks and buses have almost identical functionality, they followed the usual protocol of buses being segregated from tracks. While this made sense if you were bussing reverb or sub-grouping drums, if you were using techniques like parallel and multi-band processing, it could be awkward to separate elements of the same sound into track and bus groups. This is no longer necessary.

Rather than describing the details of how Patch Points work (see Sonar’s online help for that), let’s look at how you could apply this new capability. Here’s all you really need to remember about Patch Points:

What makes this particularly useful is the ability to tweak processing while recording. Although automation works most of the time, some processor parameters aren’t automatable; and if you’re using the external inserts for a piece of hardware, that hardware may or may not accept automation. Track-to-track recording also can capture any expressive, non-automatable gestures as you record from one track into the other.

Because this is a real-time process, if the synth incorporates random elements, recording will capture those variations (repeat the recording process until there’s a variation you like), as well as the results of real-time parameter tweaking.

This technique is also useful for working with multi-output virtual drums. Recording each drum to its own audio track (you can record as many tracks simultaneously as your computer will handle) lets you hear and edit all the drum parts in context as they’re being recorded, so you can do mix tweaks like emphasise the snare occasionally, or accentuate the hi-hat’s rhythm.

Finally, Patch Point synth recording makes it easy to create an audio backup of virtual instruments (10 years from now, even if the synth isn’t compatible with your computer you’ll probably still be able to read WAV files). At some point during a project I’ll record each synth track so that its audio is backed up with the other project audio.

Recording a synth’s audio track will include the processing from any effects in the virtual instrument’s FX Rack, but you may want to record both dry and processed versions. The solution is to create a send in the virtual instrument’s audio track, and assign it to an aux track. Because the send is post-FX, record-enabling the aux track allows recording of the processed sound while the main audio track records the dry one.

Go With The Workflow

If you want to break down the separation between buses and tracks, you can do so by working entirely within Sonar’s Track View. In this case, you’d treat an aux track like a bus. For example, suppose you traditionally use Sends to send track signals to a bus, which then hosts a reverb plug-in. To do this entirely within Track View, assign the send outputs to the same Aux Track. Insert a reverb in the aux track, and now it will act like a bus.

Track 1 is the drums source track. Its output Patch Point feeds two parallel tracks. One track has no processing; the other one squashes the drums but is mixed a bit lower than the dry track so that it ‘fills out’ the sound.

There are four main advantages of working primarily, or even solely, within Track View:

I’ve mentioned previously how to create a tape ‘varispeed’ effect: disable looping, enable stretching, set Transients to 0 so there are no slice markers, then enter the pitch change in the two numeric pitch windows (semitones and cents). If you assign the output of the track holding the clip to an aux track, then initiate recording to record the pitch-shifted sound, the recorded track also will include any effect that’s in the FX Rack, regardless of whether you patch a track output or a track send into the aux track. 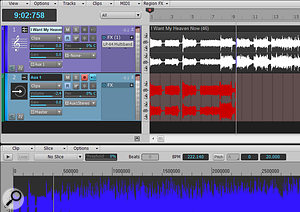 Here, the Loop Construction View audio is being transposed up by 20 cents, and aux track 1 is recording the transposed sound in real time.

Now for the sound-design part. When you audition audio files in the browser, and tick both Preview at Host Tempo and Loop Preview, the playback rate will depend on the tempo. Choosing extremely slow or fast tempos can produce all kinds of serious musical warpage. This is much more prominent with Groove Clip WAV files than REX files.

The audio defaults to playing through a Preview bus. Although you can assign the audio to any bus, you can’t record a bus output. But if you patch the Preview bus out to an aux track, you can record into that. Don’t forget you can Ctrl+click multiple files displayed in the Browser to play them simultaneously, which can produce even stranger results.

With some musical styles, layering a loop at half tempo can produce a great backdrop for a track, or provide a break. However, it’s hard to predict what a loop will sound like at half speed, so it’s helpful to audition the effect of dropping the speed in real time. When you find a suitable sound, record it and drop it into the song.

Feeding sends to aux tracks instead of buses lets you record the sound of the send, modified by whatever effects are in the aux track’s FX Rack. This allows for expressive, real-time control gestures. Once you have an isolated effects track, it’s ripe for experimentation — why not try shifting your reverb an eighth note late, or breaking up echoes into polyphonic patterns?