The Tool window is the key to some nifty sequencer manipulation in Reason and Record.

Reason and Record helped rewrite the DAW rule book, going all‑out on photo‑realistic graphical elements and doing away with the multi‑window, dialogue box‑driven approach that was (and still is) the norm for many DAWs. They make it perfectly possible to go from capturing initial ideas to mixing your masterpiece without so much as visiting a menu, let alone tweaking around with values in a settings window.

There are times, though, when we need a level of precision and some additional editing facilities that just can't be achieved visually — and this is where Reason and Record's Tool window comes in. It offers a range of data-manipulation features that can save you time, offer you creative possibilities, and help manage your work.

Rather than going exhaustively through all that the Tool window offers, let's look at a handful of typical scenarios where it can come in handy. This will, hopefully, give you some idea of how you can harness what it has to offer for your own work.

It's All About The Feel

Here's a common situation: you've played in some MIDI drums from your keyboard controller, in real time. The natural next step might well be to quantise them for a tighter effect, and to do this you might be used to right‑clicking a clip and choosing 'Quantise Notes' from the contextual menu, or using the Apple‑K/Ctrl‑K shortcut. Reason and Record's default quantise resolution of 16th notes is very handy and will cover many situations. But what if you need something else, or a little more subtlety?

To do this, select the clip or notes, and go to the Tool window's Quantise pane, where you set the basic quantise resolution. The Amount pop‑up allows you to make the effect more subtle. Choose 100 percent and click Apply and the notes will snap absolutely to the quantise grid, computer‑style. But why not try 90 percent, or 75? These settings will cause the notes to fall much nearer to where they should be in terms of time, but without the strictness that can rob your performance of musicality and feel.

To begin with, I've selected the hi‑hat notes from a particularly unrelenting Redrum pattern, which has been copied to a track using the Copy Pattern to Track command. Applying a little velocity randomisation using the Tool window breaks up the mechanical effect and gives my pattern a bit more life.Here's another possibility: you've got a piano part that has already, somehow, been 100 percent quantised. Yes, it might be in time, but the squeaky-clean accuracy, especially of every note of a chord playing at precisely the same moment, can sound really artificial. You need to loosen it up a bit, so start by selecting it, then choose an appropriate quantise setting and enter a value of four or five in the 'Random' field. After you click Apply, Reason or Record just shakes up the note timing a tiny little bit, hopefully restoring a more human‑like looseness. The sequencer uses a resolution of 240 ticks per 1/16 note (or 960 ticks per quarter note) so at a tempo of 120bpm a tick is equal to about half a millisecond.

There's another way to introduce variation and looseness into a MIDI part. Say you've used the 'Copy Pattern to Track' command to get a step‑programmed Redrum pattern into a MIDI track as individual note events, which is always a good thing to do if you want to do some editing beyond simple pattern switching. The trouble with Redrum parts is that the limited velocity values on offer can make patterns sound extremely mechanical. So as well as using some tick randomisation in the Quantise pane, go to the Note Velocity pane, select Random, choose a value of perhaps 8 to 10 percent, then click 'Apply'.

I will readily admit, though, that sometimes mechanical rigidity is great! Some styles demand it. So let's say you've played in a sequence‑style synth part and you're hearing unwanted tone variations caused by some aspect of the patch responding to key velocity changes. You might try ironing out the velocity response in the patch itself, of course, but a potentially quicker and easier way is to select a clip or some notes, go to the Note Velocity pane, choose 'Fixed', and Apply the value you enter in the field. This isn't a percentage, but uses the familiar MIDI velocity value scale that runs from 0‑127. 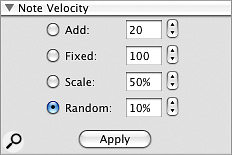 Achieving smooth string parts, whether sampled or synth‑generated, is sometimes made easier if you use a patch with plenty of polyphony and then have short overlaps between chords or notes. That can be very difficult to play in, though, especially if keyboard isn't your main instrument. Instead, try playing in your part but don't worry at all about trying to overlap chords and notes. Select the notes (or an entire clip), then use the Legato Adjustments pane to do the hard work for you. Choose 'Overlap', and set an amount like 0.0.2.0 — that's two 16ths, or half a beat in a 4/4 time signature. Apply, and you're done.

Here's another variation on the same theme: you have a TB303‑style mono bass‑line synth patch, which produces that typical glide effect when the MIDI notes that drive it overlap. A section you've played in shouldn't have any glides, but one or two have crept in. Select the notes of the section, then in the Legato Adjustments pane chose 'Gap By', and a tiny amount, say five ticks (0.0.0.5). This just prevents notes from overlapping, so no glides are triggered.

Introducing a bit of randomness into your song productions can sometimes be inspiring. Perhaps you've played in an arpeggiated‑style synth part and want a quick variation of it for a few beats. Or you might have a Dr Rex loop spitting out a bongo groove, and want it to do something different for a one-bar break or fill.

For this sort of thing, give the Alter Notes function a spin. Select the notes you'd like to rearrange (or a clip that contains them), dial in a percentage amount, and click Apply — yes, that's all there is to it. Far from being a completely random process, Alter Notes will generate randomness only amongst the pitches you've selected, so you're going to get the same notes (or the same Dr Rex slices), in the same rhythmic positions, but just a different order. Clever, eh?

If you ever want truly random pitch changes, perhaps to generate the ever‑popular '1970s mainframe computer gone bad' effect, select some notes or a clip and use the Transpose Notes pane. Choose the Randomize radio button, and set a pitch range within which the notes will end up completely randomised. Finally, click 'Apply'.

Alter Notes in action. Here an original riff has been duplicated twice, and a 70 percent setting applied to each of the copies. By maintaining the rhythms and the original palette of pitches, the outcome remains musically useful.

Let's finish off our exploration of the Tool window's possibilities with a few quick tips.

Record has had its first maintenance update, which is a free download for registered users from www.propellerheads.se. It squashes several dozen bugs, inconsistencies and instabilities, but adds some useful new features too.

Mac users benefit from having new custom audio drivers for the separate inputs and outputs that are characteristic of the built‑in audio on Intel machines. Previously, you will have had to create an Aggregate Device in Audio MIDI Setup if you were relying on built‑in audio and needed to use an input and output concurrently. Now, though, you'll find pre‑configured input/output pairs in the Audio page of the Preferences window.

Everyone gains from a new audio import scheme. Now, if you go to File menu / Import Audio File and select multiple audio files, they'll be added to separate new tracks at the wiper position. The only exception to this is if you have an audio clip open in the Edit view first. Then the files are added as new Comp Rows.

There are also new possibilities for recording incoming MIDI performance automation to mix and audio tracks — and we'll be looking into this subject in more detail in Reason workshop columns over the coming months.