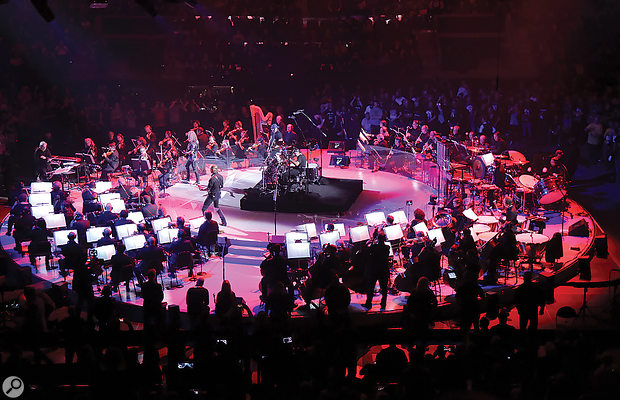 Recording a live heavy metal concert would be challenging enough — but when you throw an 80-piece orchestra into the mix, all bets are off!

Metallica and the San Francisco Symphony are playing in front of 18,000 fans for the first of two S&M2 concerts, which are being recorded and filmed for a major release. Suddenly, during the first set, just into a song aptly called 'Confusion', Lars Ulrich's in-ear monitoring cuts out. Usually, that wouldn't be a problem — the drummer would simply pull out his in-ears and be able to hear what's going on. But not this time. There are no regular monitors, no amps, nothing generating sonic clues on the stage, which has been specially designed in the round for S&M2 to accommodate band and orchestra in as uncluttered a layout as possible. About all Lars can hear is the slapback of the PA in this very big room, which is not helpful.

And now there's a problem. In the recording trucks, it's clear that something went wrong in 'Confusion', and the crew know they have one last opportunity to record a good performance of the song during the second concert. Responsibility for ensuring this happens falls to Greg Fidelman, the producer of the S&M2 concert recordings. Greg has been Metallica's go-to guy for all things audio related since he came on board as engineer and mixer of the Death Magnetic album in 2008. He's also worked with Slipknot, Red Hot Chili Peppers, Adele, Johnny Cash, Neil Diamond and Slayer, among many others.

Greg decides that on night two, he will have to make an on-the-spot judgement of the performance as it goes down. Then, with 'Confusion' played, the band will take an extra 60 to 90 seconds pause between songs while Greg gives them his decision. And if it's a no, they'll immediately play the song again. "That was probably the most nerve-wracking part of the show for me," Greg recalls. "It was like: 'Come on guys! You're almost there!' But there were no mistakes on that second night," he adds, relieved, "and I told them to go ahead with the rest of the set."

It's not hard to imagine how stressful that must have been. But the entire event was a massively complex undertaking, not least because it involved an 80-piece orchestra, two conductors, a large recording crew, and a band who, luckily, Greg had good experience of recording live as well as in the studio.

"This particular job was probably the most interesting thing I've done since I started doing this work," he says. "It was super challenging and incredibly difficult, but I like that — that was the thing about it I liked the most. I learned more in the months before and after the concerts than I've learned in any given year since I started. Yes, it was hard and it was stressful, but it was also exciting. And I made good friends in other genres of music, people I probably wouldn't even have access to meeting normally. As far as the gigs go on my top 10, this one is definitely right up there."

It all began for Greg in late January 2019 when Lars called him to talk about a 20th anniversary S&M event. The first one had taken place over two nights in April 1999 at Berkeley Community Theatre, featuring Metallica and the San Francisco Symphony and billed as Symphony & Metallica (S&M). That original project had been a brave and, as it turned out, successful merging of metal and classical.

Now the band wanted to do it again, but in typical Metallica fashion it would be bigger and better this time. They would collaborate with the same orchestra, and these first discussions centred on how to incorporate some of the band's newer songs and deciding which songs to use again from the first S&M project — now referred to as S&M1. As with S&M1, a major component would be to record and film the concerts for release. For S&M2, this was at first intended to be an exclusive one-day-only worldwide cinema release, but later it was widened to include CD, vinyl, streaming and DVD/home-theatre versions. 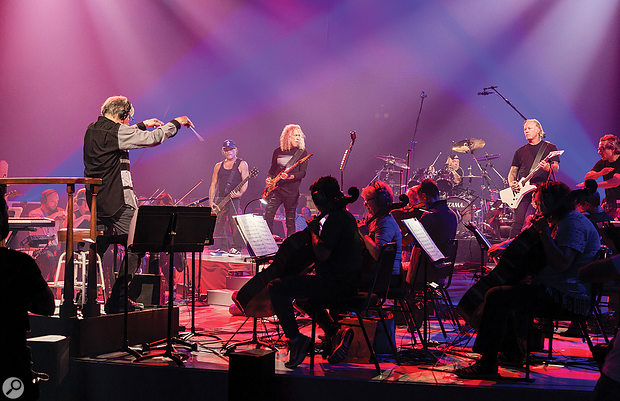 "I don't think anybody has a lot of experience doing this kind of thing," Greg says of the metal-orchestral amalgamation, "because it just doesn't happen very often. So there are no experts to rely on. That being said, we got lucky, in that the San Francisco Symphony's music director and conductor, Michael Tilson Thomas, who's awesome and obviously ridiculously talented, is also surprisingly open-minded and embracing of all things Metallica. He connected us with Edwin Outwater, who ended up conducting the majority of the show, and Bruce Coughlin, who did the newer arrangements. I don't know a lot of people in the world of orchestras and classical music, but I can't imagine there being another two individuals better suited for this gig. They were both tremendous to work with and really great collaborators. I know from other experience I've had that when you bring rock and classical musicians together, it's not always the most comfortable or natural thing. The worlds are different."