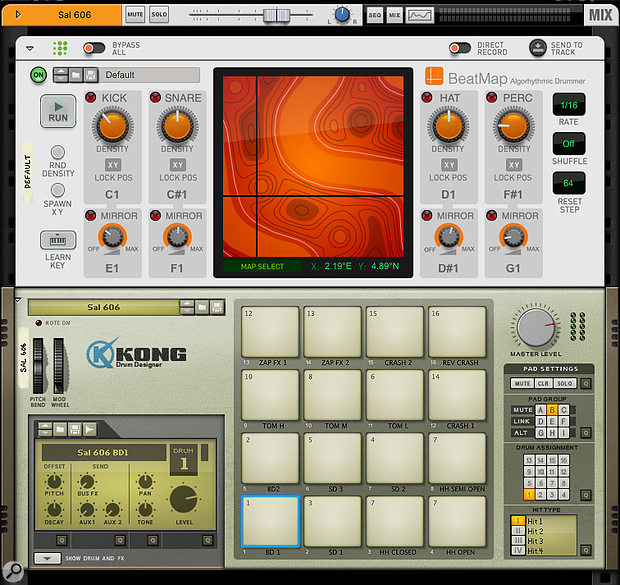 No rhythm? No problem! Reason's new BeatMap device has got you covered...

BeatMap is a new Player device that has arrived with Reason 11.2. It's an 'Algorythmic' (you see what they did there?) Drummer, designed to generate interesting and varied rhythmic patterns. As a recap if you're a recent convert to the Reason Rack, Players are MIDI transformers and sequencers that snap onto instrument devices. They can augment or alter notes you play, or drive instruments on their own.

Reason 11 already introduced the Drum Sequencer Player, which is a more traditional, programmable grid sequencer. The nice thing about BeatMap is that it's included with the standard version of Reason (Drum Sequencer comes with Suite) and I think it's a lot more fun and interactive.

BeatMap generates up to eight triggers in the form of short MIDI notes. It can plug into any of Reason's instruments, but it's primarily designed for drum devices. If you create a Kong instrument and add on the BeatMap Player (see Screen 1, above), you'll hear a drum pattern comprising four sounds when you start Reason playing.

There are four primary triggers, labelled as Kick, Snare, Hat and Perc. Below each of these is a 'Mirror' channel, which generates triggers in between those of its master channel. The MIDI note that each trigger channel generates is clearly labelled and can be changed either by clicking and dragging, or by arming the Learn Key button and playing in a note from your MIDI controller.

With the default note assignments, BeatMap channel names align with the standardised layout used on Kong and Rytmik patches. The four Mirror notes typically align with a secondary Kick or sub, an alt Snare or Clap, an open Hi-hat and a second percussion sound. Redrum patches typically use a slightly different layout, and the standard General MIDI layout (used by the ID8 device) is different again. BeatMap's preset library includes template patches for these sound sources. Of course it's fun to go off menu with the assignments and get unexpected results.

There are two main ways to control how BeatMap generates a drum performance: a contour map-style X‑Y grid where you pick a basic pattern; and a series of Density controls that adjust the complexity of each of the four primary trigger channels. The in-between Mirror triggers just have a velocity control, as their pattern is a reflection of their master channel.

Let's start with the map, which dominates the front panel. Points on this map represent different patterns of Kicks, Snares, Hats, Perc. The position is indicated by a crosshair, and you can click and drag directly within the display or adjust the co-ordinate read-outs. There are 16 steps in each direction, for a total of 256 pre-defined patterns. 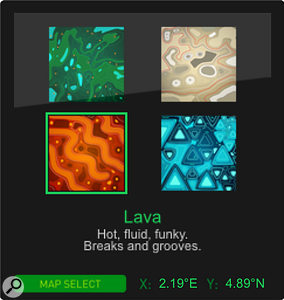 Screen 2. There are pattern grids to choose from, suiting different styles.I was initially confused by what the contour map represented. In fact the graphical backgrounds have no relevance to the results, they are window dressing. But the patterns are not scattered at random. Towards the bottom-left corner you will get simple, straight patterns. As you move to the right the kicks will become more syncopated and moving upwards results in more complex syncopated snare performances.

There are four different grids to choose from, accessed via the Map Select button (Screen 2). The default 'Temperate' map is described as mixed beats, but the other three steer toward specific styles. 'Arid' is aimed at four-on-the-floor underpinned dance music, Lava is for grooves and breaks and works for bass music of various flavours or hip-hop depending on tempo. Finally, 'Uncharted' seems to cover trap, dub, dancehall and weirder territory, with triplets and broken beats.

Each trigger channel has a Lock Pos button, which pins the channel to the current grid position so that it's not affected by further position changes. In this way you can scan through the map and pick and choose patterns for the individual parts.

The channel Density knobs are the other key influence on the results, determining the number of triggers generated for each part. Fully anti-clockwise effectively mutes the channel, while the other extreme will produce busy rolls and fills. The Density controls also set the frequency of Mirror channel gates. There's only one control on each of the Mirrors, and it's unlabelled. This trims the MIDI velocity of the mirror triggers, and again muting is achieved by turning fully left.

In the name of experimentation, I plugged the Player into a Europa synth, and ended up generating a load of unexpected results that turned into the basis of a song.

Unless you want a repetitive beat throughout your track, you're going to want to animate BeatMap somehow to create variations, drop-downs, fills, etc. Alongside this you can still manually play the drum instrument from a MIDI input while it's being triggered by the Player.

The most effective way I found to create an interesting drum track is to tweak the Density knobs over time. First, find the basic pattern as a combination of grid position(s), channel note values, Densities and Mirror levels. An arranged performance can then be improvised with the Densities. Mapping BeatMap to a MIDI controller helps enormously with this. I used a Korg NanoKey Studio which has eight knobs laid out just like BeatMap, and an X‑Y touchpad which I mapped to the grid.

Parts can be dropped out easily by cranking the knobs to the left, and fills added by doing the opposite. More subtle changes and builds can be introduced with less extreme control tweaks. To capture an improvised arrangement as automation, right-click the Player and choose Create Track For [Patch Name]. Then simply drop the Sequencer into record and twiddle away. As well as Position and Density, you can automate the note assignments. To completely drop the drums out you can automate the Player's On button. 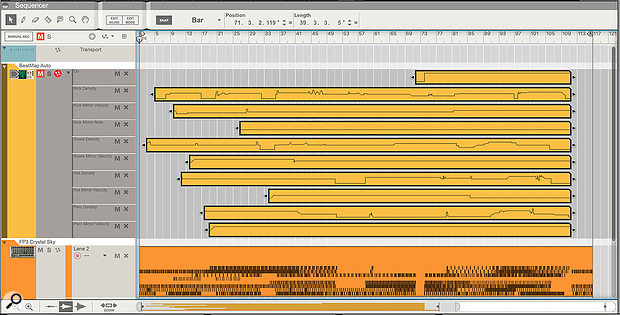 Screen 3. Whole song arrangements can be made by automating BeatMap controls, and this can be converted to a MIDI track. 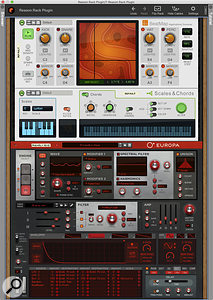 Screen 4. Connecting BeatMap to a melodic instrument can result in fun, unexpected results.In playing with BeatMap I revisited the Player Send To Track feature, and we'll return to this in detail another time. This prints the output of the Player to a Sequencer track. You might use this to commit different BeatMap states to specific areas of your track. The Send To Track button writes within the Left and Right Locators in the Sequencer. A really awesome feature is that if you've automated BeatMap as described in the previous section, you can print the whole thing as MIDI (see Screen 3, above), with the effects of the automation maintained.

BeatMap might be aimed at drums but there's nothing to stop you plugging it into melodic instruments. In the name of experimentation, I plugged the Player into a Europa synth, and ended up generating a load of unexpected results that turned into the basis of a song.

There are some tricks here to get musical results (see Screen 4). First I adjusted the channel note values to get something I liked. Then I teamed up the BeatMap with the Scales & Chords Player, which I used to constrain the incoming notes to a specific key and generate chords.

While playing with BeatMap I found myself wanting to store snapshots to return to, either for different song sections or to do the Elektron trick of making everything go completely crazy then dropping back to normality. The closest I could get was to save states as patches. I created a dedicated folder next to my song file so only the patches for the project show up in the patch loader. This works pretty well, allowing you to recall all the parameters without interrupting the playback position. There is a slight delay to load the patch, so you just need to flip patches a little ahead of time.

There are a couple of limitations with this trick: you can't reset changes to the current patch without swapping to a different one and back again; and loading a patch doesn't trigger automation recording, so the only way to capture a performance that used this trick would be to record as audio. It would be great to see a snapshot storing feature that could be sequenced in Reason's Pattern Lane.

BeatMap has a generous collection of rear panel connections for CV. As well as individual Gate outs for each channel, you can modulate Densities, Mirror Velocities and the X‑Y position. One fun thing I experimented with was to use an LFO to modulate the Density of one or more channels. You could use a random modulation, but I sync'ed a ramp so that the pattern got more intense towards the end of every couple of bars. Another fun experiment was to take the X‑Y CV output and connect it to some effects like a filter after the drums.