The MTRX Studio will be an attractive option for people who want mobile rigs yet still require Dolby Atmos monitoring.

The big software announcement from Avid at NAMM 2020 was, of course, the introduction of folder tracks into Pro Tools. This was the focus of April's column, and when it becomes available, this feature looks like it will represent something of a sea change in how larger sessions are handled. There were, however, a couple of other announcements from Avid. On the hardware side, the most significant of these was the introduction of the MTRX Studio: a smaller, non-configurable version of the MTRX.

The days when Pro Tools software worked exclusively with Avid or Digidesign hardware are, of course, long gone, provided you aren't using HDX or HD Native. The terminology around HD Native has always had the potential to confuse, an issue which has been addressed by changing the name of the Pro Tools HD software to Pro Tools Ultimate. 'HD Native' (with a capital 'N') refers to the system using the dedicated HD Native Thunderbolt interface, rather than a software–only version of Pro Tools running 'natively'. Since Pro Tools 9 was released 10 years ago, software–only versions of Pro Tools have been able to use any audio interface, but to exceed the 32 I/O limit which restricts software–only versions, an interface equipped with Mini DigiLink connectors has been necessary. Such interfaces are accessed either via an HDX card or the HD Native Thunderbolt interface. The principal advantage of HD Native, then, is that it is the lowest–cost Pro Tools system that isn't restricted by the 32 I/O limit of software-only Pro Tools.

The standard Avid HD I/O box, itself a reworking of the venerable 192 I/O, is still available, offering configurable analogue and digital I/O via card options. For smaller rooms, particularly edit suites which need limited IO for voiceover and overdubs but don't need the large input numbers used for tracking bands, the Avid Omni has been a great success. This 1U, fixed–configuration, DigiLink–equipped interface incorporates modest I/O and, importantly, is equipped for 7.1 surround, with a built–in monitor controller that is capable of controlling a surround monitoring system.

The similarities that the new MTRX Studio shares with the Avid Omni are striking, and the former's feature set makes it an interesting proposition for anyone who finds the options presented by software Pro Tools or Pro Tools Ultimate aren't sufficient — particularly anyone who needs their system to be Dolby Atmos-capable. The MTRX Studio is a 1U, fixed–configuration, DigiLink interface which offers the undeniable quality of the MTRX but at a much more accessible price. At a predicted cost of $5000 it's not cheap, but you do get a lot for the money: 16 analogue line I/O on D–subs are complemented by a pair of rear–panel mic preamps and front–panel DI inputs, which brings the inputs up to 18 (the mic preamps and DI inputs aren't available at the same time). Analogue TRS monitor outputs and a pair of independent headphone outputs make the MTRX Studio broadly similar to many 1U premium interfaces on the market, while its 16 channels of ADAT I/O are also fairly standard. Being an HDX peripheral, it offers two Mini DigiLink connectors (so that two I/O boxes can be connected to a single HDX or Native interface), while Loop Sync and word clock I/O are also present.

The MTRX Studio also features 64 channels of Dante audio over IP as standard — something the significantly more expensive MTRX only offers as an option. Networked audio is something that increases the potential of the MTRX Studio enormously, making it suitable for serious live tracking work, and the routing flexibility offered by Dante increases the options available for headphone mixes: you can simply plug in as many extra Dante–enabled headphone amplifiers as you need.

The single biggest feature I can see driving sales of the MTRX Studio is going to be its suitability for use with Dolby Atmos.

So far, this doesn't sound too different from any premium interface. If there is a killer feature, it has to be the monitor control arrangements: the MTRX Studio includes a slightly cut–down version of the speaker correction capabilities of the SPQ card option available for the MTRX. This is a speaker processor which offers up to 256 filters on 16 channels, and up to 150ms of delay for time correction. The SPQ processing doesn't offer any facilities for measuring your room, but once a measurement is taken, the correction can be implemented in hardware, in the monitor controller — which is much more convenient than software-only correction, and compatible with any pre-existing monitoring setup.

The single biggest feature I can see driving sales of the MTRX Studio is going to be its suitability for use with Dolby Atmos. The number of analogue outputs is sufficient to drive a 7.1.4 Atmos monitoring rig and, crucially, the DADman control software is flexible enough to set up a monitor profile in which all the monitors in the Dolby Atmos rig are controlled from a single knob on the front panel. That might sound trivial, but the majority of similar interfaces only allow control of up to eight analogue outputs from the monitor control knob — enough for 7.1 surround, but not for 12 or more outputs.

The front-panel controls allow acces to the majority of features, including preamp gain, monitoring and headphones. A clever system of colour switching also gives clear monitoring of input and output levels from the 16 front–panel meters, with all of the I/O viewable in banks of 16. Through the included DADman control software, some of the less obvious but really powerful features become apparent. The Monitor Profiles section allows the setting up of multiple profiles with any necessary fold–downs, and the 512x512 routing matrix from which the MTRX Studio gets its name offers all the patching needed to set up complex, recallable routing, independent of the DAW I/O. And, being an Avid product, the MTRX Studio offers full EUCON integration with Avid worksurfaces like the S1. At the time of writing, the MTRX Studio is announced but isn't yet available. Like Pro Tools 2020, it is expected soon.

In spite of the release of the new Mac Pro, it is still the case that PCIe slots are a bit of a rarity for Mac users (though they are still pretty common on PCs). For users who need to access more than 32 inputs and outputs from Pro Tools, and so need to incorporate DigiLink–equipped I/O, the HD Native box is a solution. At the time of its release, the single low–latency monitoring path that it provided was an attractive benefit, though as computers have become faster and more reliable, monitoring through native DAW software at 32-sample buffer sizes has become relatively common, so this is a less significant issue than it once was.

The 1U Rackmount Thunderbolt Chassis can accommodate a single HDX card, as well as an entire Mac Mini, to form the smallest DSP-powered Pro Tools system to date. 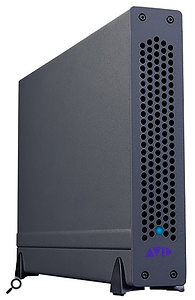 The Avid Thunderbolt Desktop Chassis.But for users who need the DSP that HDX cards provide, Avid, in partnership with Sonnet, have introduced two new products: the Desktop and Rackmount HDX Thunderbolt Chassis. There have been external chassis like these available from third parties for some time, but the introduction of these Avid–approved models is significant for a couple of reasons. The first is that third–party chassis are often designed with the installation of graphics cards in mind, and as a result, some of them have noisy fans; this might be acceptable to users of external video cards, but is probably less so to users of HDX cards. Secondly, as these are official, Avid–badged and fully supported products, they will be more attractive to the kinds of larger facilities and educational institutions likely to purchase in bulk.

The Desktop Chassis can accommodate a single HDX card, or there's a 1U rack that can accommodate both an HDX card and a Mac Mini, creating a 1U HDX Mac system which. This, when combined with the MTRX Studio, opens up the possibility of a very powerful, expandable, 2U Dolby Atmos-capable Pro Tools system. That configuration is anticipated to be available for just under $10,000 when the chassis become available, which — like the MTRX Studio — is expected to happen later this year.