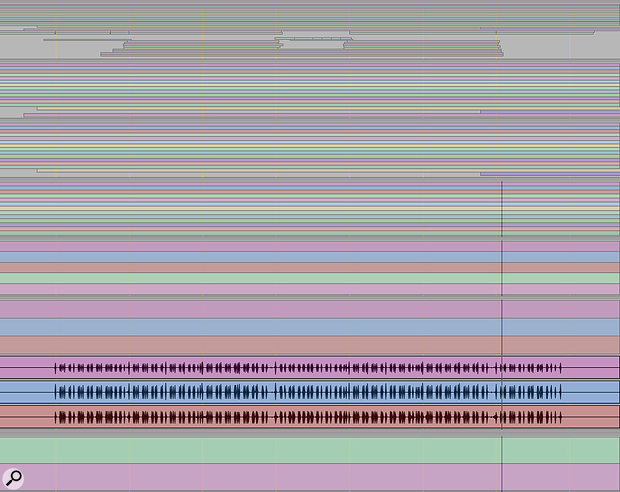 Mix and Edit Groups have been a mainstay of Pro Tools for many years, but I never really explored the possibility of unlinking them. Instead, I would set up a selection of tracks as a Mix Group, an Edit Group, or a Mix+Edit Group, and simply enable and disable Groups depending on what I was doing. The ability to unlink Mix and Edit Groups would have saved me the trouble, as it meant that Groups could be automatically enabled in the Mix window and disabled in the Edit window, or vice versa. However, in a rare example of Pro Tools losing a feature, the ability to do so has recently been dropped.

It has occurred to me that the introduction of Folder tracks might lead to Groups falling by the wayside for many users. In many respects, Folder tracks duplicate functionality that Groups also offer. However, they still differ in a few important ways, and Groups still have some advantages over Folder tracks, as we'll see when we dive in.

Pro Tools' Edit Groups link all the member tracks in the Group, and only affect a limited number of attributes: specifically, the track height, timebase and, of course, audio, MIDI and automation editing. The editing of the contents of a Folder track, whether audio or MIDI, can be performed from the overview Folder track overview. This overview is the only track view available in a Basic Folder track, and it shows the clips as blocks representing their position in the timeline. The clips display in the correct colours, but unlike in a Group, the contents of the clips aren't represented. (The overview is identical to the often overlooked Blocks view available in the Track View selector. Calculating and drawing waveforms used to be far more taxing on host computers than it is now, hence the option to display coloured blocks with no waveform.) When the Folder track contains a lot of tracks the overview can get very crowded, and can quickly begin to resemble the view presented by the Universe window (see Screen 1, above).

Once you've used them in a mix, Routing Folders become a little addictive. 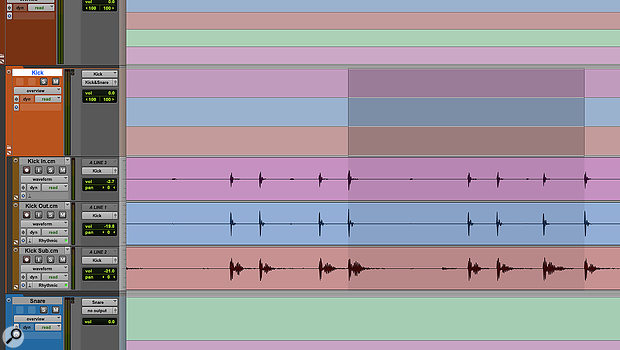 Screen 2: An implied selection in a Track Folder.

It has to be said, though, that there are more complex applications of Edit Groups which can't be replicated with Folder tracks. The necessity for the collection of tracks which are being linked for editing purposes to be in a Folder does mean that they are always next to each other. By contrast, the tracks linked by an Edit Group can be non-contiguous, and this offers a distinct advantage over Folder tracks. The convenience and integration of Folder tracks, however, suggests to me that Edit Groups will become the exception rather than the rule for many.

Once you've used them in a mix session, Routing Folders become a little addictive. They combine quick and repeatable session management with level control and bus processing. Again, however, they don't provide exactly the same functionality as some of the features they can be used to replace.

A good example is track show/hides. To my mind this was always something of a fudge in Pro Tools, but it was a fudge that worked. Assuming you weren't using EUCON, the options were either to Ctrl+click on a Group in the Groups sidebar to show only the tracks within that Group — a really handy feature — or to set up a memory location with None ticked in the time properties and Track Visibility ticked in the general properties. This has been my preferred method for years, as groups of tracks can be quickly toggled in and out of view using the numeric keypad. While this gives detailed control, it does take time to set up; Folder tracks do nearly everything that's possible with the memory locations approach, without as much dedicated setup time. 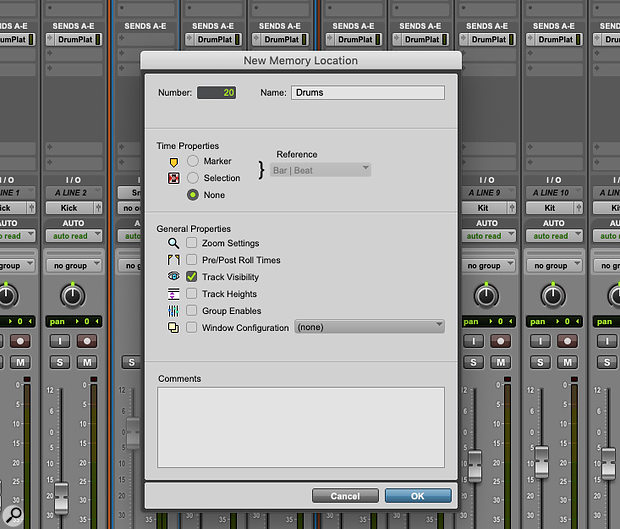 When it comes to level control, things are less straightforward. In my pre-Folder tracks workflow, I usually created an Aux Input for any related group of tracks to allow bus processing to be applied, and would set up a Mix Group specifically so I could create a VCA master for level control. Using an Aux Input to submix through creates a summing point in the mixer, and this is a very useful thing. The ability to apply processing to a combined or multed signal is convenient for EQ and essential for compression, as the results differ so much between compressing individual tracks at source and compressing them together at the summing point. Bus compression often gives that desirable interaction between tracks which so may refer to as 'glue'. An Aux Input fader controls the level of the audio after the summing point and the bus processing. Conversely, a VCA fader controls the level of the source tracks feeding in to the summing point, so the effect of either of these faders is going to be very different depending on whether you want to drive audio harder into the bus processing or place the bused audio into the context of the rest of your mix.

The Routing Folder track offers the functionality of the Aux input, with the bus processing and post–summing level control, but there is still a role for the VCA master in all but the simplest of mixes. Trimming the level of the tracks feeding into the summing point can be performed using a VCA master, and prior to the release of Folder tracks, it was my preferred method to control these source tracks. A VCA master is best thought of as a Master Fader for a Mix Group: the level of faders in a mix group is linked but VCA masters bring additional advantages, one of the most significant being VCA Spill. VCA Spill allows users of compatible control surfaces to 'spill' the contents of the Group the VCA is controlling out onto the control surface. It's an incredibly powerful way of working and one I've wished was available without a control surface. Although Avid haven't called it VCA Spill, unfolding a Folder track is pretty much what I was thinking of when I imagined having software-only VCA Spill.

Null But Not Void

'Null Groups' are Pro Tools Groups with no attributes at all in the Attributes tab of the Modify Groups dialogue, and they are a useful way to be able to create a VCA master to not only control the level of the source tracks, but also to be able to quickly solo all the members of the Group while still having the solo buttons of the source tracks unlinked, allowing individual tracks to be soloed as well. This solo logic doesn't happen when submixing via an Aux Input, forcing you to make decisions about whether to solo–safe the Aux Input, and exactly how to manage solos in the source tracks.

Routing Folder tracks bring some much-needed improvements to the solo logic applied to submixes, and the level control provided by the fader is perfectly capable of controlling the level of the submixed tracks. As for how to control the level of tracks going into plug–ins used for bus processing, while the threshold of a single compressor can be adjusted easily enough, with the complexities of analogue–modelled plug–ins being used in combination, being able to adjust the level feeding a plug–in chain is best achieved using the mixer architecture. With the advantages of using a VCA master to control solos duplicated by the Folder track itself, the most obvious contender to manage the level of the bus would be the tool provided by Pro Tools to manage headroom on buses at summing points: the Master Fader!

Master Faders are present in the Pro Tools mixer at at summing points precisely for this reason. Whether or not you choose to display them is up to you, but they are there already and if you need to trim back the levels feeding your drum bus, for example, the quickest way to achieve this is to create a Master Fader. I suspect that in my Folder tracks workflow I might be using Groups less but using Master Faders more...