Reason: Using The MIDI Out Rack 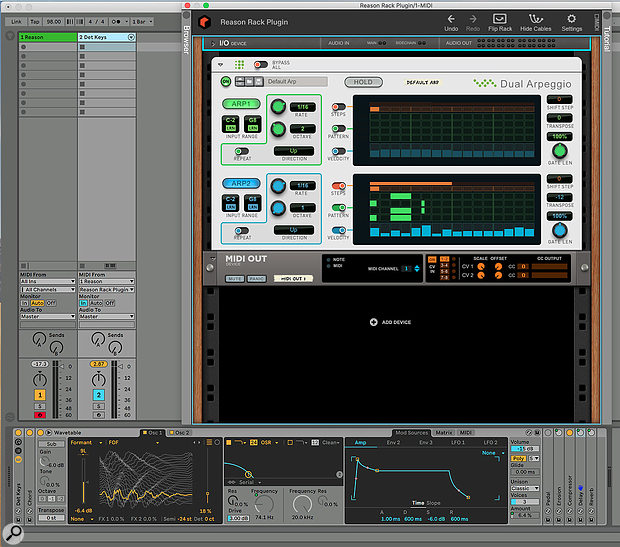 Screen 1. Using a Reason Player to arpeggiate Ableton's Wavetable synth. MIDI from the master keyboard is processed in the Reason Rack and routed back to the DAW via the MIDI Out device.

We look at what you can do with Reason's new MIDI Out Rack device.

There have been a couple of significant updates to the Reason Rack plug‑in. As a Pro Tools user I'm delighted to now have an AAX version of the plug‑in; we'll explore that soon. This month we'll dig into the other new feature: a MIDI Out device, which adds the ability to patch MIDI from inside the Rack environment to other tracks in your project.

Why route MIDI out of the Reason Rack? Well there are the Players: various MIDI performance transformers and sequencers that are just as cool when used with your other instrument plug‑ins (or hardware synths) as they are with Reason's internal devices. There's also the still-great Matrix pattern sequencer, the analogue sequencer in Thor, Redrum's multi-channel gate sequencer, and many other sequencing Rack Extensions. Plus, the MIDI Output devices can translate Reason's internal CV connections into CC, so you can utilise any modulation source from the Rack in your DAW.

Most DAWs could benefit from a built-in step sequencer as an alternative to the piano-roll approach.

Bring On The Players

If you have an up-to-date version of Reason installed, try inserting the plug‑in in your DAW and dropping any Player device into the virgin Rack. Reason will automatically add the new MIDI Out device and snap the Player to it. (Players can't exist on their own; if you try this in the stand-alone Reason app it creates an ID8 instrument).

If you arm the track or make it the focus for your MIDI keyboard controller, MIDI will pass through the Player, and into the MIDI Out device polyphonically. Different DAWs have their own way to pick this up. In Screen 1 (above) I've got the Player on Track 1 of a Live project, and Ableton's Wavetable synth on Track 2. The MIDI source for each track is set on the channel strip's MIDI From section. On Track 2's MIDI From selector I've chosen Track 1. In the second pop-up I've selected the Reason plug‑in specifically. Track 1 is armed and Auto Input monitoring, Track 2 is in Input monitoring mode. Now, anything I play or record via Track 1 will trigger the synth on Track 2, with my notes processed by the Reason Player.

An important point is that you always need to use separate tracks for source and destination. It would be great if you could simply drop Reason in-line with another instrument, acting like a MIDI plug‑in, but I don't know of any DAWs that allow this kind of configuration.

Most DAWs could benefit from a built-in step sequencer as an alternative to the piano-roll approach. The Matrix pattern sequencer is one of several options you could access via Reason, and comes with all versions, including Reason Intro. We covered the Matrix in detail all the way back in July 2007. 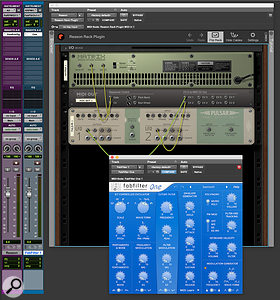 Screen 2. A Matrix step sequencer is patched to the MIDI Out, and is being used to play the FabFilter One synth on Track 2 in Pro Tools. The MIDI Out is also converting Rack CV from a dual LFO generator into MIDI CC messages.Adding a Matrix to a fresh Rack plug‑in won't add the MIDI Out device — you'll need to drag one in from the bottom of the Instruments list. You'll also need to manually connect the devices on the back of the Rack. In Screen 2 I've got the Reason Rack plug‑in running in Pro Tools. I've added a Matrix and cabled the Note and Gate outputs to the MIDI Out. With direct cabling like this rather than via a Player, the MIDI will be monophonic.

As well as handling Note and Gate signals from the Rack, each MIDI Out device includes eight channels of CV to MIDI CC conversion. In Screen 2, in addition to the Matrix sequencer I've got a Pulsar dual LFO connected to two of the CV inputs. On the front panel I've assigned the first two channels to CC numbers 2 and 3. You have to do this: the channels default to 0 which is effectively Off. The FabFilter One synth on Track 2 picks this MIDI, and I've assigned these CC values to Cutoff and Pulse Width.

Most LFO sources in Reason are bi-polar (they have positive and negative values), while envelopes are usually uni-polar, and the Matrix's Curve mod sequence lane can be switched between the two. MIDI CC modulation is all positive values, so bi-polar mods like LFOs get cut off at the mid point. To manage this, the MIDI Out device has Offset and Scale knobs for each CC channel, allowing you to attenuate the modulation and slide it into the positive range.

When using a Player you can of course record MIDI notes on the Reason track. Alternatively, you could record to the destination track to capture the processed MIDI. With a Matrix sequencer you can drop MIDI patterns from the Reason plug‑in directly to a track: with the Matrix selected, you'll see a blue notes icon to the left of the device. You can drag and drop this to print the current sequence to your DAW's timeline.

Better than this, I like to record the output of the sequencers to quickly capture a real-time arrangement. In Screen 3 I've used the Drum Sequence Player to program a number of patterns triggering NI's Battery. I've then recorded myself recalling patterns, much like we did last month in Reason with the BeatMap Player. With this done you can disable the Reason sequencer, or switch it to an empty pattern. 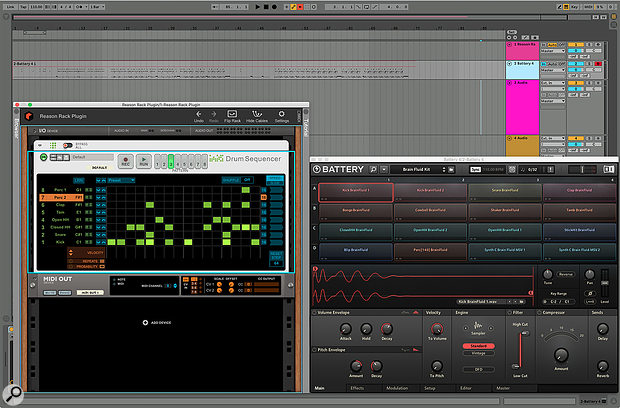 Screen 3. Recording the output of Reason's sequencers and Players is a fast way to lay down a whole arrangement.

Screen 4. The MIDI Out device routes MIDI out from Reason or the Reason Rack plug‑in to your DAW or hardware synths. As well as notes and gates, MIDI Out can translate CV signals to MIDI CC, with scaling and offsetting.

I've mainly focused on routing MIDI from the Reason Rack plug‑in to DAW tracks. In fact the MIDI Out device is also in Reason stand-alone, and replaces the External Instrument device. Here, the MIDI Out device is the key to incorporating external hardware synths into your Rack and the master timeline Sequencer. The workflow in terms of choosing a destination and how you route audio from your synths back into Reason is very similar to using the External Instrument device. We explored this in depth in the SOS April 2019 Reason workshop. The big advantage of the new device is improved handling of CC messages, with eight individual connections and Scale and Offset parameters.