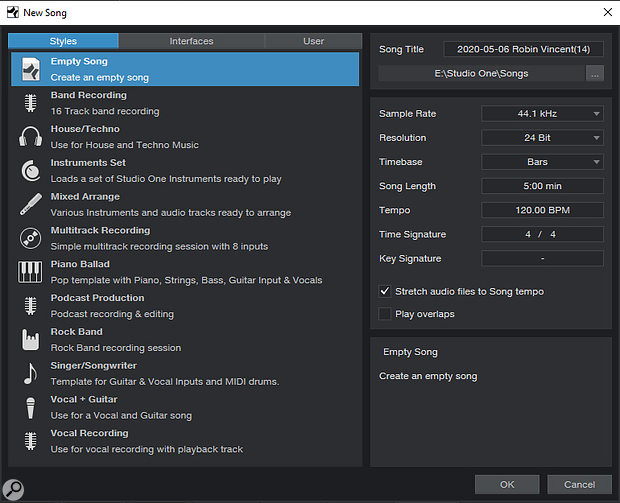 Studio One comes with a good selection of song templates ready to go.

Making the most of Studio One's templates.

If you are anything like me then you enjoy the vast expanse and enormous potential of the empty project. Anything is possible as I ponder whether to add an Audio Track in mono or stereo, or perhaps to kick this masterpiece off with an Instrument Track. I don't tend to give the idea of templates much thought. I mean, how on earth could a programmer at PreSonus have any idea about the awesomeness I'm about to conceive, let alone create a template for it? But looking at the Podcasting template that we used in last month's workshop reminded me that, actually, these templates can be enormous time savers. But more than that they can be instructive in the sort of processes they have set up, and give hints at how you should be handling various types of project. Useful and creative, eh? Well, in that case, let's take a deeper dive and maybe even create our own.

Templates can be accessed whenever you create a new song. The New Song window (shown above) appears and you can select a template from the Style, Interface or User tabs.

Interface templates are only relevant if you have a PreSonus audio interface, and they generate multitrack projects that are handily configured to the specified interface. They are relatively simple, adding in a couple of effects busses for reverb and delay, inserting some standard Fat Channel plug‑ins across the tracks and some EQ and limiting on the master outputs — good solid stuff and a useful shortcut to having to set up all those inputs and outputs yourself. Of course, there's no reason why you couldn't commandeer one of these interface templates, remap the I/O to your own interface and resave the template.

The Style tab is where all the action is at the minute. In addition to our favourite 'Empty Song', we get 11 other options which are less about style and more about intention:

Band Recording is quite an intense template that assumes you're at least a four-piece rock band with drums, bass, guitar and vocals. It also assumes you're using 11 microphones on the drum kit and prepares them all for the thrashing they are about to receive. On the kick, snare and toms, a Pro EQ, Gate and Compressor have been inserted and set up appropriately. The hi-hat gets some individual treatment but the overheads and room mics have nothing set up other than the panning. All the drum tracks route into a group channel with a Channel Strip inserted.

The bass, electric and acoustic guitar tracks have Ampire inserted, with no amps, and some minimal differences — for example, where they've elected to add some modulation and EQ to the acoustic guitar. The vocals get special attention with the Tricomp, Pro EQ, Beat Delay and Reverb all ready to go. There are additional electric guitar and vocal channels set up with no processing.

So, with little sound engineering experience you could load up this template, plug in your microphones, DI the bass and electric and you are ready to rock.

The House/Techno template is a bit more dubious. It loads up a sort of 'my first techno track', making good use of the Pattern Sequencer for some four-to-the-floor kick and hi-hat action. It also loads up a couple of Mojito synths for bass lines and Presence for chords. It is quite fun and if you were stuck for ideas or a classical composer who just got commissioned to write some techno then it could be perfect.

Instruments Set loads up an instance each of Mojito, Impact, Presence and SampleOne, with sounds loaded and a lot of EQ and compression, while Mixed Arrange instantiates Presence plus some band–style audio tracks, appropriately set up and EQ'd.

The Multitrack Recording template creates a simple eight-track project with inputs set up ready for recording.

Piano Ballad is a complete project with strings, piano, bass and drum parts all written and arranged into verse and chorus sections. There's a couple of audio tracks prepared for vocals and guitar.

We looked at the Podcast Production template last time, of course, and discovered that it was remarkably useful.

Rock Band is almost identical to the Band Recording template, but presumably with more rock.

Singer/Songwriter apparently means guitar, vocals and drums. The vocal and guitar tracks are nicely set up with compression and EQ on separate male and female channels.

Vocal + Guitar is sort of the same as Singer/Songwriter but without the drums. They've used the Channel Strip plug‑in rather than a separate compressor and EQ.

Vocal Recording loads up an audio track for backing, plus a group of four vocal tracks that route through the same processing.

The included templates are a bit of a mixed bag. Some are undoubtedly useful if you want a starting point for mixing and separation in multitrack recording. Others you should treat, perhaps, as an example of what you could do with your own template, tailored towards the sort of music and instruments you would be using. 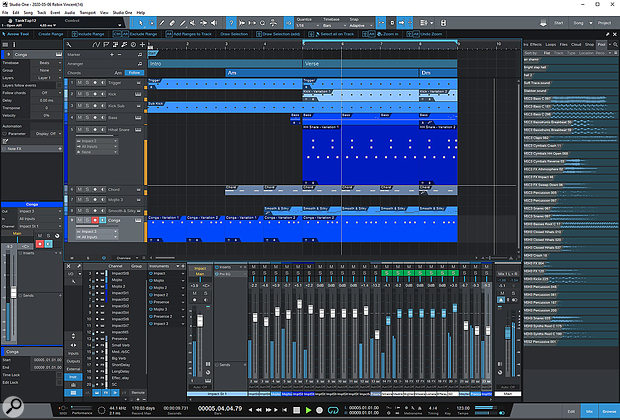 Some of the Studio One templates, such as the Techno one, come with a pretty well-populated arrange page.

Something that I didn't expect was the fact that these templates can contain clips, patterns and arrangements. Both the Techno template and the Piano Ballad came with complete songs written inside them. This led me to discover that you can buy templates that are complete projects in a chosen style that you can fiddle with yourself. For example, for under £30 you can pick up the Melodic Progressive Template by Snydex & DenBray, or the Dope DAW Template from DAW Templates. These contain entire arrangements, with PreSonus plug‑ins and instruments loaded with the presets and samples all included. It's an extraordinary way of getting a window into how someone produces that style of music and could be educational as well as fun to play with.

Let's look into how we can create our own templates in Studio One. You could choose a song you've been working on and go to the File menu and click on Save Template — job done! But to get the most use out of a template I think it needs a little bit more thought and preparation to create something that's going to save you the most time in the future. It needs to be somewhat generic but also focused on what you use all the time.

It's a good idea to spend some time browsing through past projects to see the sort of plug‑in chains and instruments you use frequently.

Start with an Empty Song and call it something helpful. It's unlikely that a single template will cover all your possibilities. You might want to create one for multitrack recording, or just for mixing, or one that contains tracks set up for all your instruments, synthesizers and external equipment. Maybe you want a template that loads up your go-to software instruments.

It's a good idea to spend some time browsing through past projects to see the sort of plug‑in chains and instruments you use frequently. For instance, in your nice new empty template your first task could be loading up the master bus with the plug‑ins you always use at the end of the chain. This may be the multiband compressor, Pro EQ, Spectrum Meter or third-party plug‑ins (the included templates use only PreSonus plug-ins, but you don't have to!). You don't have to try to imagine what settings would cater to the most projects but if there are things that you find yourself always doing to these plug‑ins then do those things now and you are already saving time when you next use this template.

Next, you could create busses in the console for instruments and audio tracks that you are likely to use. Don't forget to name them and colour them because now is the time to do all the boring admin tasks that can often get forgotten in the creative process. As with the master bus you could drop in effects that you know you tend to use again and again.

Then we come to FX Channels. Add your favourite reverb to an FX Channel, or set up a delay — whatever you often use. Then add the sends to your bus channels, saving you more clicks down the line. 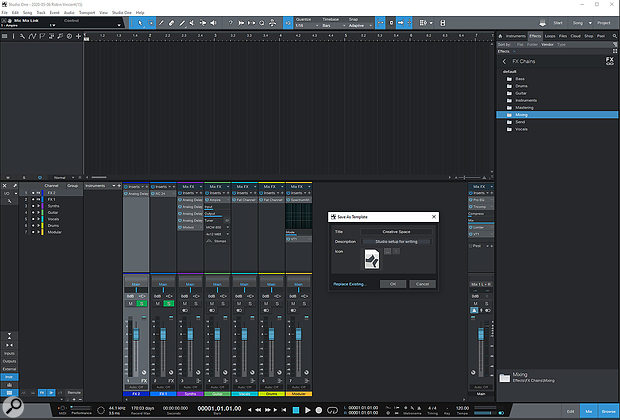 Making your own templates can be a huge time saver.

You've now got the bare bones of a song template that'll work in any situation. As you add audio tracks or instrument tracks you already have places to route them, effects they can be sent to and processing that can create the sort of sound you tend to lean towards. Now you can hit the Save Template button, and this starting point will be available to you next time you start a new song.

Your template could also be a lot more complex, of course. You could have audio tracks set up, record-enabled, inputs assigned and routing configured all ready to go. You could map your entire studio into a template so you never have to create another track — it's already there. It is a good idea to generate multiple templates for different tasks or variations on the basic one. Just make sure you describe them adequately in the Save Template window so that you can find them again in the list.

If you want to delete a wayward template that's sitting there taunting you in the User list, you have to right-click it in the New Song / Template window, select Show in Explorer, and then manually delete the .songtemplate and .data file.

You can also use a template as a repository of mixing and plug‑in setups that you can import into another project. So, if someone has sent you a session to mix you can use the Import Song Data option from the Song menu to choose effects busses or groups and import them directly into your session, with the plug‑ins loaded and ready to go. There's one caveat to that: for your effects busses to appear in the Import Song Data list they must be part of the arrangement structure. If they just exist purely in the console then they won't appear in the list. The simplest way to enable this is to right-click the fader and select Edit Automation, which automatically generates an automation track in the arrangement. It's an annoying workaround in an otherwise fabulous feature.