Podcast Template Use In Studio One 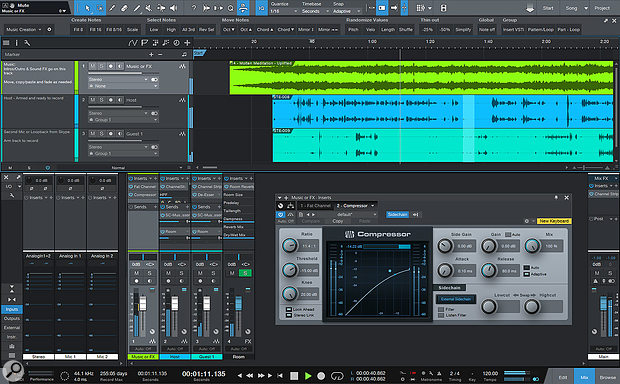 The new Podcast Production template is a great time-saver that automatically populates your project with a Music track, Host and Guest speech tracks, and useful compression templates for evening out speech levels and ducking music.

We explore the new Podcast Production template in Studio One.

My plan for this month's workshop was to go through the creation of a podcasting template that you can use with Studio One every time you want to record or edit a new podcast. However, in the last update to Studio One 4.6, PreSonus added a very useful Podcast Production template, which already has everything set up and ready to go, completely stealing my thunder. So, I'm going to change tack a little bit and go into why the template has what it has, and also give you a few additional tips and pointers that are missing from the template.

So, let's open Studio One, create a new song and under Styles select 'Podcast Production'. Studio One presents you with a three-track project. Track 1 is labelled 'Music', track 2 'Host' and track 3 'Second Mic or Loopback'. This is your standard podcasting setup. You have a track for background music, intro and outro music and sound effects. Host is for recording your voice, or whoever is moderating/narrating the podcast, and the third track is for your guest's voice, assuming you have one.

Recording and editing a podcast is really no different from any other multitrack audio project, but we're just trying to keep things as simple and repeatable as possible. The single window plus browser approach of Studio One makes it easy to drag music and sound effects into your project without any bother. You can drag in multiple audio files at once, but be aware that Studio One defaults to creating a separate track for each audio file. You can have everything on different tracks if you wish but, in line with the simplicity vibe and the template, we want them all to land on that first audio track. To drop all the files at once onto a single track just hold down Command (Mac) or Ctrl (Windows) while you're doing it.

Now you can line up, edit, fade, copy and paste, and use all the usual tools available in Studio One to map out your podcast around the Host voice. Had this not already been done by the template I would have suggested changing the timeline and transport to seconds rather than bars and beats, because that makes a lot more sense in a podcasting environment.

Recording and editing a podcast is really no different from any other multitrack audio project...

If you've recorded your voice elsewhere then you can drag your recording from the Browser onto this track. Otherwise it's armed and ready for recording. The template assumes that you and your guest are going to be talking together in the podcast on separate microphones. It's probably a good idea to add the music part after you've recorded the voices, unless you are trying to create a particular atmosphere for your guest or you want to record the whole podcast on the fly in one take. You can do that but it's not necessary, and the luxury of post-production will let you add a good bit of polish to your podcast. So, if there's music on the music track then remember to mute it while you are making recordings.

If you have more than one contributor then you can duplicate the Second Mic track and set the inputs accordingly. It's important to duplicate this track rather than simply create new ones, because it has certain useful processes already inserted onto it which we'll come onto shortly.

It's often the case that your guest is not in the same place as you and the interview or discussion took place over Skype or Zoom or via some other online communication tool. This template suggests that you would use something called 'Loopback' in order to route that audio from the communication software into Studio One. However, that's not something easily done without a particular hardware function or additional software. Most PreSonus audio interfaces do have a Loopback function, however: this is the ability to connect a software output back into a physical input, which means you can take the output of Skype (for example) and map it virtually to inputs on the audio interface, so that they can be selected and recorded in Studio One. Most other audio interfaces do not have this function.

Some communication software packages, like Skype, are able to record themselves, so you can just import that recording into Studio One afterwards. Otherwise you can make a physical connection for recording by patching the output of your computer's audio system to the input of your audio interface with a suitable cable. Or you could use some kind of virtual driver like Virtual Audio Cable ( vb-audio.com ) to make a virtual internal connection. This will mean creating an 'aggregate device' on Mac OS or using ASIO4ALL on Windows, which adds an annoying level of complexity.

If you want to record a web chat directly into your podcast, you'll need a way to send its output into Studio One. Virtual Audio Cable allows you to do this on Windows, and is free.

The Podcast template has a couple of plug‑ins set up in the console to maximise the quality of your recordings, and offer some useful ducking between the vocal and the background music.

The music track is set up with a Fat Channel XT, where the compressor is looking to keep the music under control, the Passive EQ rolls off the bottom end, and a Limiter prevents any peaking. But there's a second Compressor plug‑in after the Fat Channel that provides the ducking. The idea is that the compressor squeezes down the volume of the music track whenever the host or guest is speaking. The Compressor plug‑in has a side-chain button that, when enabled, generates a destination option in the Send routing. On the vocal tracks, select the Music track compressor under Sends to trigger the compressor whenever there's output on the vocal track. This is, of course, all set up for you ready to go in the template.

The Compressor plug‑in has a side-chain button that, when enabled (blue), generates a destination option in the Send routing.

The Compressor is set to a ratio of 3.1:1, which I don't feel is anywhere near enough. It needs to be closer to the maximum compression to push the volume low enough to hear the vocal tracks. But this does depend very much on your source material so you should adjust that knob until you get the amount of gain reduction you're after.

On the vocal tracks you'll have another Fat Channel inserted, but this time the Gate is active in order to try to keep the background noise between words to a minimum. You may have to play with the Threshold knob to get it to drop to zero at the right level. There's some compression to even things out, and the Passive EQ is set to reduce the muddiness in the bass and put in a boost at around the 5kHz mark. The Limiter is there to catch the peaks. After the channel strip is a De-Esser just to keep those S's under control.

Finally, the Podcast Production template includes an FX channel with a Room Reverb that the vocal tracks are sent to, in order to give them a tiny bit of space — though not too much, because the idea is generally to produce something quite forward-sounding and compressed that will sound good on earbuds during someone's morning run or commute.

This template is a great place to start, and will have you up and running with the minimum of fuss. But there are a couple of other tips I would suggest that would make editing your podcasts that little bit easier:

Once it's set up to your liking, then save the project as a user template for when you do your next podcast.