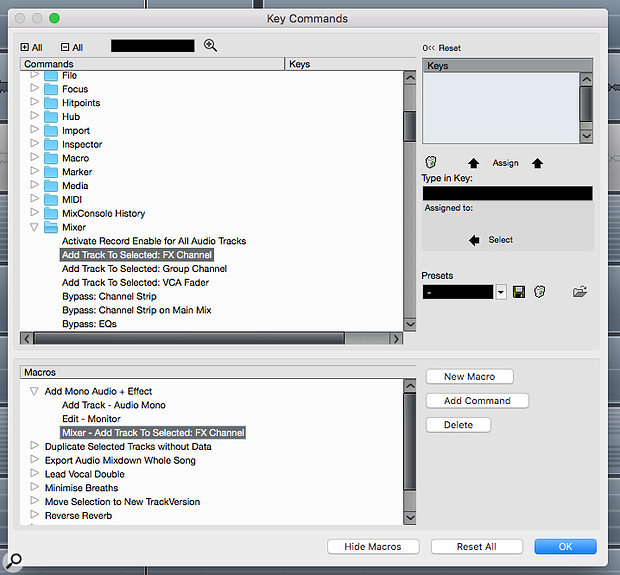 Screen 1: Macros are built as command sequences in the Key Command window, as shown here for our first example.

As these vocal examples demonstrate, Cubase’s Macros enable you to streamline your workflow significantly and save yourself considerable time.

Most time-saving Cubase features — the Workspace system, Key Commands, the Media Bay and the Project Logical Editor spring to mind — require you to invest a chunk of your time, but it’s worth it because that investment will be returned many times over in your projects. This month, I want to look at another such time-saver: Cubase’s Macro system. To help you get to grips with Macros, I’ll take you through some of the ones I’ve created to save time when recording and editing vocal parts.

The Key To Macros

Macros seem to scare some people, perhaps because it all looks a little too much like ‘programming’, but they’re actually incredibly easy to create and use, because a Macro is really nothing more than a sequence of key commands.

Macros can be viewed, created and edited in the Key Commands window, which is accessed via the File menu: just open that window and click the Show Macros button near the bottom. The panel that pops open will already contain a few built-in Macros, as well as a handful of buttons that are used to create new Macros, add key commands to a Macro or delete commands. All of those key commands (there are hundreds of them) can be found in the upper panel and it’s here, once you’ve created a Macro, that you can assign a key command to trigger it — just open the Macros section of the key command list in the top panel and you’ll find all your custom Macros there. (Macros can also be run directly via the main Edit menu.)

So, what’s a good task to automate with a Macro? While there are lots of cool examples to be found by a quick Internet search, the best approach is to examine your own current workflow: anywhere you find yourself repeating a series of routine tasks time and time again, consider whether you could build a Macro to condense that sequence into a single command. What follows are four vocal-based examples, ranging from the simple to the sophisticated. Hopefully, they’ll inspire you to design some Macros that will help you work faster and smarter.

Our first example is simple, but useful (see Screen 1 above). Imagine you’re in the middle of a tracking session and need a fresh mono audio track and add a dash of reverb, so the singer can capture a new idea. Done manually, this might take you less than a minute, but our three-command Macro condenses that to mere seconds.

The screenshot shows the three commands in this Macro. The first key command creates a new mono audio track. The second turns on monitoring (your singer will hear any insert/send effects in their headphones). When executed, the third key command (Add Track To Selected: FX Channel) provides you with the usual Add Effects Channel Track dialogue, in which you select the desired effect and name the FX Channel. It will also automatically add a send from the mono audio track the Macro created to that effect. Just run the Macro, choose the reverb and name the track, and you can get on with your recording. 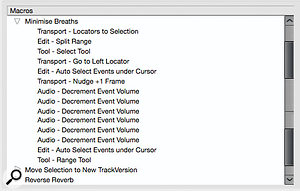 Screen 2: This Macro semi-automates the reduction in level of breath noises. (For this screenshot and the next one I’ve combined two screens so you can see all the commands at once).Breath noises in your recordings often require attention. They can be deleted or, for a more natural sound, simply reduced in level so they sound less prominent, and Macro can speed this process up considerably. Screen 2 shows the sequence of key commands I assembled for this Macro. Before executing it, you must use the Range tool to highlight the section of audio containing a breath sound. The Macro then automates a number of steps. First, it sets the left and right locators around the selected range. Next it splits this section of the audio to create a new event. Then, it switches to the Select tool and moves the cursor so that it lies within the range of the new event. The Decrement Event Volume command is repeated six times (each instance reduces the event volume by 1db). While this will generally be enough to make the breath sound less noticeable, you can adjust the number of repetitions to personal taste.

Finally, the Macro switches back to the Range Tool, so that when you move along the timeline to find the next breath (and repeat the process) you’re ready to run the Macro again. Yes, you still have to step through the whole performance finding each breath, but they’re pretty easy to identify visually on the waveform and you should listen to them anyway — and at least you can then tackle each instance very quickly.

Our next example is more of a creative option — it automates the process of applying a reverse reverb effect to a selected range of our vocal (although it could be applied to any audio track and, by changing the last three steps of the Macro, you could instead apply a different effect). 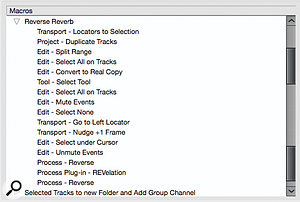 Screen 3: This Reverse Reverb Macro could easily be modified to apply different spot effects.Again, prior to executing the Macro, you need to use the Range Tool to select the phrase within the vocal track that you wish to apply the effect to. Then, as shown in the Screen 3, the Macro places the left and right locators around the selection, duplicates the audio track, converts that to a ‘real’ copy (so the duplicated audio is independent of the original audio), splits this duplicated copy so the selection becomes an individual event, mutes all the audio on the duplicate track, except the required event, selects just that event, and finally applies the effect by reversing, adding reverb, and then reversing again.

Despite this being a long list of commands, the only point in which you are asked for input is to confirm that you want a ‘new version’ when the reverb is applied. The end result is a second version of your vocal track where just the selected ‘reverse reverb’ range is audible, and you can simply blend the processed and unprocessed versions to taste. You could, of course, replace the final three lines of the Macro with alternative effects options to create other sorts of spot effect.

One common vocal-orientated task is the creation of a ‘fake’ double-tracked vocal when you have only a single vocal part to work with. Screen 4 shows a single Macro for Cubase Pro users (because VariAudio is required for this) which, once you select the lead vocal track to be doubled, can make a pretty good stab at the whole process. 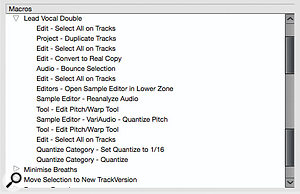 Screen 4: Cubase Pro users (who have VariAudio) can use a Macro to create a fake double track at the press of a key.The first few key commands will be familiar from the previous example: all the events on the track are selected, the track is duplicated and then the events on the duplicate are converted into a real copy. The next key command bounces (renders) all the selected events into a single new event. This bounced single event is then selected and opened within the Sample Editor in Cubase’s Lower Zone. The Reanalyse Audio command is then executed on this event, thus creating VariAudio pitch ‘blobs’ for the entire event.

Next, the Edit Pitch/Warp Tool is selected so that Quantize Pitch can be applied, quantising all notes to the nearest semi-tone. This might not always be the most appropriate option but it will shift most notes by a few cents relative to the original vocal line. And you can, if required, go in and adjust the pitch changes by hand afterwards, once the Macro has done the donkey work for you.

The final three commands select the audio event again, set the Quantize resolution to 16th notes and then apply a quantise, shifting the timing of some notes relative to the original. Once the Macro has completed its work, all you need to do is pan and/or blend the levels of the original and ‘faked’ double track to taste.

I’ll sign off with a few observations. First, the order of the commands you choose is absolutely critical, and you need to include every single step that you would use if executing the same sequence manually. If something isn’t working as you expect, then this is where to start your ‘debugging’ process.

Second, there are a few limitations as well as features I’d love to see Steinberg add. For example, there’s currently no option to expand the Macro portion of the Key Commands panel. We could use a few more editing tools (for example, for moving commands up/down within an existing Macro), and I’d love the ability to duplicate a Macro as a starting point for a new one.

But, in the meantime, Macros are already a very powerful feature — these few vocal-based examples are really just the tip of a very big Macro iceberg, and I hope they’ll inspire you to create some of your own.