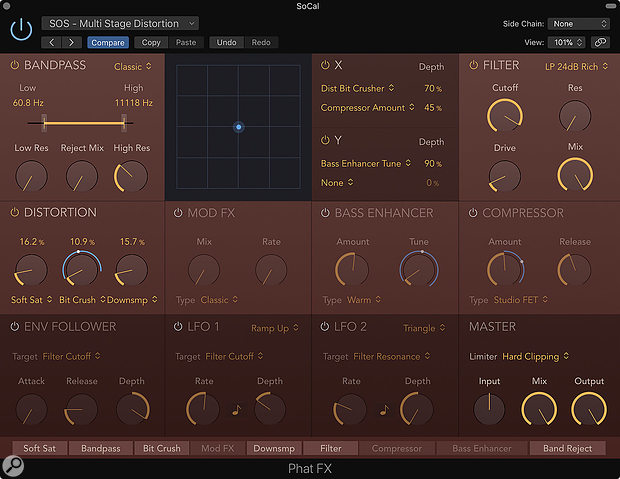 Screen 1: The Phat FX Distortion section has three stages of distortion, and each stage can have a different distortion algorithm. You can use the Effect Order Strip at the bottom of the plug‑in UI to put different effects between the distortion stages. In this example, I have assigned distortion stages one and two to Soft Sat and Bit‑crusher and then placed a Band‑pass filter between them. I have then selected Downsampler as the third stage and used the Filter section to roll off high‑frequency harshness.

Apple have reinvented Camel Audio’s CamelPhat as the flexible Phat FX in Logic Pro 10.4. We see what it can do.

When Apple bought developers Camel Audio, it wasn’t long before their synth Alchemy appeared in Logic Pro X, but if you’re a Camel fan you may have been left wondering what would happen to their equally wonderful effects.

The good news is that in the Logic 10.4 update, Apple added two new multi‑effects plug‑ins: Step FX, which can be considered the update for CamelSpace, and Phat FX, the update for CamelPhat. Helpfully for legacy Camel users, you can even replace a CamelPhat or CamelSpace effect plug‑in with Phat FX or Step FX and the new instance will retain your settings, though Apple don’t guarantee that things will sound identical.

CamelPhat was always a favourite amongst dance music producers for adding distortion and loudness to drums and bass lines, so in this month’s Logic Notes we’ll explore those areas using the new, improved Phat FX. Let’s begin by looking at how to turn an acoustic drum beat into a monster breakbeat. On a Drummer track with a drum loop playing, click on an empty insert slot to open the effects selection drop‑down menu. At the bottom of the included effects list is a new filter category for Multi Effects. Select ‘Phat FX’. From the plug‑in interface, go to the effects preset menu and audition the Drums category to familiarise yourself with the types of processing afforded by the plug‑in. Notice that Phat FX is capable of a wide variety of treatments from subtle volume enhancement to full‑on, nose‑bleeding distortion.

Now that you’ve tried some presets let’s look at creating our own. The Phat FX plug‑in UI is divided into five key areas: six effects modules (Band‑pass, Distortion, Mod FX, Bass Enhancer, Compressor, Filter), an assignable X/Y pad, three modulation sources (Env Follower, LFO1, LFO2), the Master section, and along the very bottom, the Effect Order Strip. The Phat FX processors are linked together in series in a long chain, however you can change the order of the effects modules by simply dragging the individual effects within the Effect Order Strip. For now, begin with the ‘Kick Fattener’ preset and use the power buttons to the left of each effect name to turn off the different processors.

Now that everything has been turned off, let’s explore the effects individually. We will start by using Phat FX as a relatively simple multi‑stage distortion. Turn the Distortion section on. It’s structured as three distortion stages each with a knob to control the amount and a drop‑down menu beneath it from which you can choose from 11 different distortion algorithms, ranging from valve simulations to bit‑crushing and sample‑rate reduction. Experiment combining different algorithms and distortion amounts. In the Master section use the Output knob to attenuate the effected level so that you can level‑match the effected and bypassed signal for more meaningful comparisons when A/B’ing. You can also use the Master section Mix knob to balance the dry and wet signals to make the distortion more subtle.

The largest potential area for experimentation lies in re‑ordering the three distortion sections using the Effect Order Strip. This allows you the freedom to put different effects between each distortion stage. For example, you may want to create a lo‑fi patch by having a distortion stage set to Soft Sat to replicate input drive, and then experiment with putting the Band‑pass filter before or after the Bit‑crusher distortion algorithm. Try expanding this by assigning the Downsampler to the third distortion algorithm and then use the Filter section set to Low‑pass to reduce aliasing (see Screen 1, above).

With current settings, the Envelope Follower opens the low‑pass filter according to the amplitude of the incoming audio, ie. a loud drum hit opens the filter a lot, whereas a quiet hit opens the filter a little. Let’s change this so that the Envelope Follower modulates a distortion effect, and reverse the modulation so that the loud drum hits remain clean and precise and the distortion is applied as the amplitude decreases, creating the illusion of more sustain. In the Filter section, choose the Tube option from the drop‑down menu. When you hit play, you’ll hear the distortion effect increasing as the amplitude increases, creating an unpleasant effect. Reduce the Filter Amount to 60 and then go to the Envelope Follower and set the Release to 0.11 seconds so the envelope tracking the signal is really fast and responsive. Now experiment with a Depth between ‑300 and ‑1000; the further to the left you turn the knob the more you decrease the amount of distortion on louder elements, effectively cleaning up the transients and leaving the distortion only to be applied to the quieter elements. This adds the sustain and extra harmonic content we’re seeking. You can experiment with modulating different distortion treatments by changing the Envelope Follower’s Target to one of the Distortion stages. 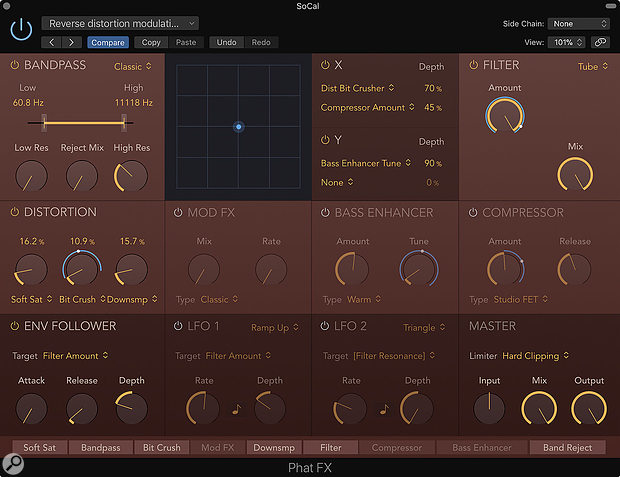 Screen 2: Here the Enveloper Follower is being used to decrease the the amount of distortion applied to loud transients, effectively cleaning up the loud transients and applying the distortion effect to the quieter portions of each drum hit.

Let’s now add some bottom end to the drums. There are two modules that you could use to accomplish this: the Bass Enhancer and the Band‑pass module. The Band‑pass module is made up of a resonant low‑pass and high‑pass filter. The Low Res parameter sets the amount of boost, and the Low frequency slider defines the point at which the boost is applied. Try setting the Low Res parameter to 75 and the Low frequency to 47.4Hz for thunderous amounts of bottom end. Changing the Band‑pass algorithm will also change the end result. Try choosing the ‘Gritty’ algorithm to hear a pronounced difference. Just watch out as it can sound unpleasant if driven too hard.

Another way to add earth‑shaking bass is to use the Bass Enhancer module. This is very straightforward; just set the Amount to 60 percent so you can easily hear the bass being added, then use the Tune knob to zero in on the point in the low end you want to accentuate (for me this was 50Hz), and then back the Amount off to taste. The Bass Enhancer also contains different algorithms and you can use the drop‑down Type menu to audition them. Combining the Band‑pass filter with the Bass Enhancer will yield a range of different results and, as with the Distortion module, it’s worth experimenting with putting other effects in the signal path.

Lastly, let’s look at how we can use Phat FX to add rhythmic modulation and movement to a bass part. On a bass track create a simple, minimalistic bass synth part and add an instance of Phat FX to it. Load the Bass / Crunched preset and set the Master Mix Parameter to 100 percent so you hear only the effected signal. To add movement to your Bass part let’s first route LFO1. Click on the LFO1 section and from the drop‑down menu select the Ramp Up shape. Set the Target to Filter Cutoff, the Rate to 1/2 bar and the Depth to 100 percent. In the Filter section, roll the Cutoff back until the filter frequency modulation starts at a satisfactory place. For me this was about 330Hz. Hit play and you should hear the filter cutoff rise every half bar, creating a rhythmic pulsing effect. To make the effect less pronounced, simply reduce the LFO1 Depth parameter. To create a more complex modulation pattern, modulate the filter with LFO2 as well. Go to LFO 2 and set the modulation shape to Ramp Down. Set the Target to Filter Cutoff and this time, set the Rate to 1/8t and experiment with different Depth values. The combination of having LFO1 with a Ramp Up shape pulsing at half a bar and LFO2 with a Ramp Down shape pulsing at 1/8t creates some really interesting rhythmic patterns (see Screen 3). 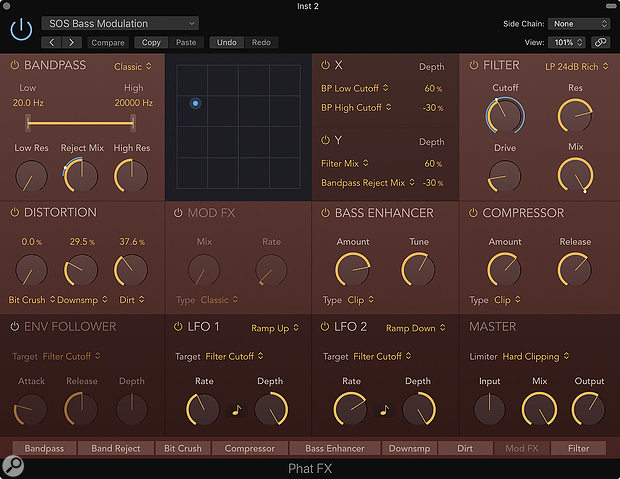 With the Phat FX multi‑effects plug‑in there are so many sweet spots to find and so many combinations of effects routings and settings to audition that it’s worth setting aside an evening to explore all of the wonderful combinations that can be achieved. When trying to mangle a drum or bass part it’s wonderful to have so many great‑sounding options all located in a single simple user interface. Welcome back, Camel Phat!