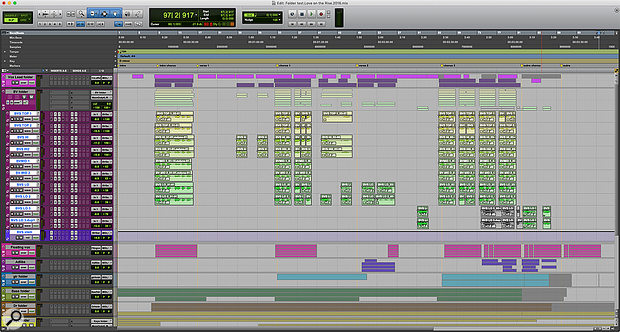 Folder Tracks can combine organisational and routing functions. Visible in this screen are several 'closed' folders with the contents visible Universe-style, and the open 'BV Folder'.

Folder Tracks are set to change the lives of every Pro Tools user. Here's why...

It has been a long time coming, but at NAMM 2020 Avid finally previewed one of the most requested new Pro Tools features for some years. There has been the inevitable 'DAW wars'-style sniping online from people who rightly point out that Folder Tracks have been available in other DAWs for some years. Fair enough, but as was the case when Clip Gain was finally introduced to Pro Tools back in version 10, Avid have really thought things through and implemented it in an elegant and powerful fashion. Folder Tracks might sound like a simple feature, but Avid staff explained that it affects nearly every part of Pro Tools — and, in spite of the wait, I am thoroughly impressed with what they were showing.

Although no date was specified at the time of writing, Folder Tracks are expected to be available soon. Avid showing a preview version at NAMM can be taken as an indication that the feature set is very close to final, but that isn't to say that what we finally get won't be slightly different. The overall impression left by the preview version is that Folder Tracks will transform mixing and impact session management in all sorts of ways. My initial thoughts are that Folder Tracks are going to tidy up my use of Auxiliary tracks for submixing and VCA tracks for session control, and make something logical and tidy out of what had been previously convenient but messy. I can't wait!

There are two kinds of Folder Track. The Basic Folder Track is purely organisational, with no impact on signal flow: it just affects window management and the display of tracks. Basic Folder Tracks will supplement and perhaps largely replace Edit Groups, as they can be used to show and hide groups of tracks, and basic editing can be performed on the Folder Track itself. The contents of the Folder Track are displayed in the Edit Window in much the same way as the Universe Window displays the entire timeline.

Useful as it is, though, the Basic Folder Track isn't the star of the show. That would be the Routing Folder Track, which combines the logical track grouping of a Basic Folder Track with the submixing that was previously performed using Auxiliary tracks. A Routing Folder offers all the features of a Basic Folder Track but adds the I/O, inserts and sends of an Aux track, thus bringing together some of the fundamentals of session management which previously involved exploiting a few different features. (Track show/hide management could previously be achieved using Memory Locations, by Ctrl/Start clicking Edit Group names or, for worksurface users, there was always the luxury of VCA spill.)

While I was getting acquainted with Folder Tracks, I quickly realised that I was probably going to stop using Aux Tracks for nearly everything apart from effects returns.

From a workflow perspective, the most welcome aspect of Folder Tracks is that they go a long way towards taking the work out of managing soloing in complex sessions. 'Solo safe' is an essential way to ensure a clear solo path when submixing. To 'solo safe' a track, Command-click its solo button (Ctrl-click on Windows) and the solo button will take on a transparent appearance, indicating its 'safe' status. This means that when another track is soloed, the corresponding implied mute that affects all other non-soloed tracks will not occur, allowing audio to pass through that track. This is common practice on effects returns, for example, ensuring you will still hear reverb on the vocal when you solo the vocal track.

If you want to solo tracks routed to an aux, the choice has been to either solo safe the Aux track through which the submix is routed, allowing the individual tracks in the submix to be soloed, or alternatively to solo safe all the members of the submix so you can solo the Aux track. Of the two options, the former is less inconvenient, but means that if you want to solo all tracks in a submix, you have to assign them to a Mix Group or select them all and then use Alt+Shift before clicking a solo button to invoke 'do to all selected'. There has never been a really straightforward way to solo the output of a bus in Pro Tools.

Folder Tracks address this soloing issue and, to me, this is as useful as the organisational benefits. In the past I have used a combination of routing through Aux tracks for submixing and processing, and Mix Groups with VCA Masters for level control and soloing. If you have a Mix Group enabled and use the solo button of the VCA you can solo all members of the group; and if the tracks within the group are also routed through a solo safe Aux track then you have the submix processing and routing options as well, but this isn't exactly elegant and feels like duplication. With Routing Folder Tracks, you will be able to solo a folder and hear the output of all of the tracks within it, whether or not those tracks are routed through that folder's output bus. At the time of writing the Eucon implementation of Folder Tracks isn't complete, but when it is, Folder Tracks will show as a distinct track type and will spill their contents to a Eucon Worksurface in the same way as is currently possible with VCA Spill.

Routing, of course, usually involves more than just a single level of submixing routed to the main output. In the same way as it is possible to route your snare mics to a snare submix and route that submix to a kick-and-snare submix and route that submix to a drums submix, it also is possible to nest Routing Folder Tracks up to nine layers deep. Not without restriction but enough to get very complex!

Visually, Avid have managed to make the Folders stand out without changing things too much. In the Edit Window, the track header is inset to the right in a way which isn't dissimilar to the way Playlists are displayed in Playlist view. The old disclosure triangle in the track header which was used to show or hide Playlists, automation or MIDI CC data has been replaced by two icons, one showing automation with breakpoints and another showing a folder. This is used to show or hide the tracks which make up the contents of the Folder Track, giving the organisational flexibility they are intended to provide and freeing us from scrolling hell. In the Mix Window a system of lines at the top of the window indicates the nested relationship between the Folder Track and the tracks they contain.

Creating a Folder Track is a simple operation. Once you have selected your tracks, a Move To New Folder command in the Track menu automatically creates the Folder and optionally routes the track to that new Folder, creating and naming the new bus as it does it. In old sessions which use Aux tracks to create submixes there is a new right-click menu item called Convert Aux To Routing Folder. While I was getting acquainted with Folder Tracks, I quickly realised that I was probably going to stop using Aux Tracks for nearly everything apart from effects returns, and Avid clearly expect most users to do the same.

They have been a long time coming, but Folder Tracks are so useful that it's very quickly going to become difficult to remember what we did without them. Remember life before Clip Gain? No, me neither...