In the Mix window, Folder Tracks are identifiable by their colour banding.

The long–awaited new version of Pro Tools finally hit users' accounts on the very last day of March, making this the 2020.3 update. (The new numbering system replaced version numbers with the year of release followed by the month number after the decimal point.) So what's new and what does it mean for the typical user?

Pro Tools 2020.3 supports Mac OS Catalina and is fully notarised, making the increased security in Catalina less obstructive. It also supports the new Mac Pro 7.1 with Native systems or DSP systems using up to three HDX cards, though this is likely to be an issue for rather fewer users. This isn't without qualification, however, as for the serious power users who have 24- or 28–core machines there are known issues with performance on Native systems. But for those of us who use more modest computers, what does Pro Tools 2020.3 offer to our everyday work?

Know When To Fold 'Em

This column has already discussed Folder Tracks in some detail, but that was based on the available information from the preview shown at the 2020 NAMM show. As such these features were always subject to minor changes, and while we knew quite a lot about how Folder Tracks were going to work, we didn't know everything. Having now had some time with the actual released version, what more is there to say and, most importantly of all, what are they actually like to use?

The nesting of Folder Tracks is probably the most significant feature to affect the Pro Tools user experience. Creating Folders, whether Routing or Basic, to a depth of only a single layer changes the appearance of Sessions very little, but if the nesting gets deep then representing this dendritic structure introduces a necessary amount of clutter and takes away some of the control a user has over exactly what order tracks appear in on the Edit and Mix pages. 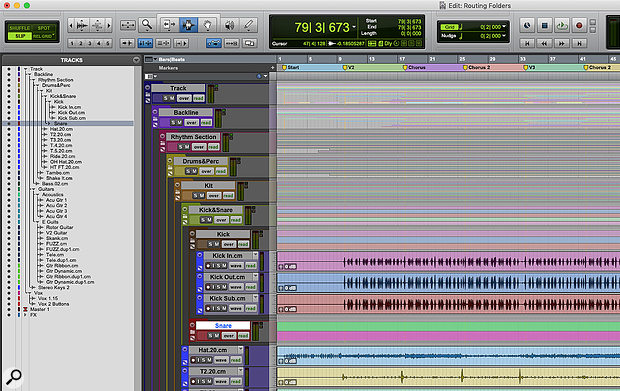 The Edit window displays Folder Tracks and their contents in hierarchical fashion.

The Edit page is the view of Folder Tracks we have seen in some detail prior to the release of 2020.3. The Folder Track appears immediately above the member tracks it contains, and an offset of the track header to the right indicates the folder hierarchy, with nested folders becoming increasingly offset as the nesting gets deeper.

In the example Session, which has a lot of nesting, the Kick In track, which ordinarily would be Track 1 in my Session, is far from the first track because it is nested seven folders deep, something I'll take some time to adapt to.

To get a quick visual overview of the structure of the nesting hierarchy, the best place to go isn't the Mix or Edit windows but the Tracks sidebar. This area of the Pro Tools interface has really found its place in this new world of foldering, where previously it has been useful but slightly optional. You really can get by most of the time without using it but there is no clearer representation of the nesting relationships between tracks available in the interface. Using some clever new shortcuts you can deftly control exactly what is visible from the Mix or Edit windows, but I've quickly started using the tracks sidebar in preference to either the Mix or Edit Windows.

In the Mix and Edit Windows a small folder icon identifies a Folder Track. Clicking on this folder toggles the Folder Track between closed and open, revealing or hiding its contents. Toggling can be tricky using the mouse as, in both the Mix and Edit windows, the graphical changes tend to make the icon shift its position between the open and closed states. More convenient is the shortcut Option/Alt+F, which in the Edit window opens and closes any folder which is included in the Edit selection.

If you want to control your folders by selecting from the track headers, make sure you have 'Link Track And Edit Selections' checked in the toolbar using the button below the Trim Tool.

In the Track List, Folders are represented by a disclosure triangle; clicking on this triangle opens and closes the Folder. The small text used in the Tracks sidebar really helps present information about the nesting hierarchy of a Session, and as well as presenting an accessible overview of the Session it is also the place I've found the new shortcuts for making Folder Tracks a help rather than a hindrance to be most usable. 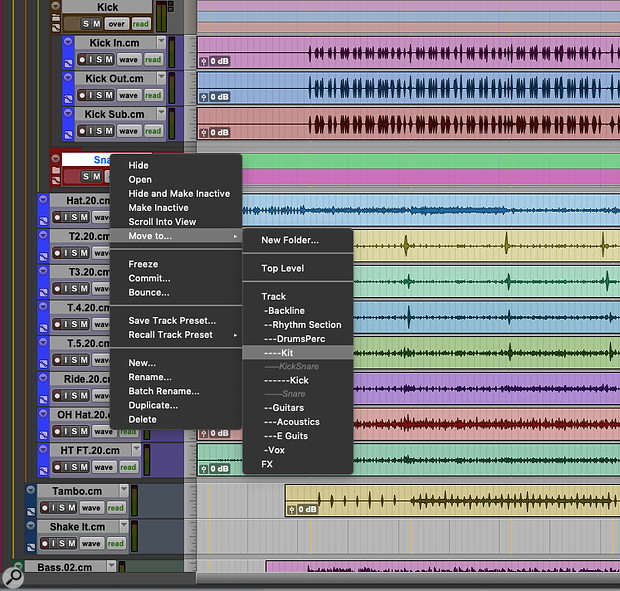 They work in exactly the same way in the Mix and Edit windows but, because in any reasonably busy Session you are never going to be able to fit the whole Session on a single screen, it is here where the tiny font used in the Tracks List really has its moment.

The impact that the Folder Tracks feature has on the experience of using Pro Tools can be significant.

The shortcuts you need to know to manage your Folder Tracks are: